In March, I discussed the problem of exotics, with a focus on the conservation controversy over the spread of whirling disease. While wading fishermen, and their felt soled boots, were initially blamed for much of the spread of this disease, further study has since found that the major culprits were watershed managers, who released infected hatchery fish into the streams. Fishermen contributed as well, with the transport of infected fish, fish parts and water from stream to stream. Fishermen’s boots played little or no role at all.

A month after I published this, “The American Angler” published a short article on Didymosphenia germinata, generally known among anglers as Didymo or “rock snot”. It is another exotic species which has appeared worldwide. Didymo is an alga, which in affected streams literally forms a carpet on the streambed. It smothers plants, crustaceans, insects and other life-forms. The end result is an aquatic desert that cannot support higher aquatic life-forms, such as fish, including trout.

Didymo attracted international attention when some of the streams on New Zealand’s south island became choked with it. New Zealand has the world’s most careful, border-entry policies. They inspect and clean all outdoor equipment at international airports and other ports of entry. It was assumed that international travelers, specifically fly fishermen and their felt soled boots, had brought this scourge with them. Felts were, and continue to be, banned in New Zealand as well as in a growing number of states in the USA.

Now, per the article in “The American Angler”, scientists at Queen’s University in Ontario, Canada, have found Didymo in Canadian lake sediments two hundred years old. Their studies have concluded that the appearance of Didymo is occurring because of climate change. With shorter winters, warmer stream temperatures, and changes in water chemistry, conditions now favor the growth of this endemic organism. Endemic is the key word. Didymo is not an isolated, exotic organism being spread from one locale to another. It is widespread and has been present in a dormant form for a very long time.

But once again, anglers and their “felts” were prematurely implicated in the spread of a destructive exotic species. As is the case with whirling disease, felts play little or no role in the spread of these organisms. Thus, wherever legal, I will continue to wear my felts, for my personal safety while wading. AND, I will also be careful to thoroughly clean and dry all my equipment, felts included, between trips from one watershed to another. Such care will mitigate any potential risk of transporting harmful organisms, minimal that it may be.

It is my fervent hope that authorities will re-evaluate their current policies, and remove restrictions on the use of felts. The safety of wading fishermen should be strongly considered when evaluating such restrictions, especially since there is no convincing evidence of their complicity in the spread of exotics. Felts remain the safest boot-sole currently available.

In last month’s article about spring fly fishing, I included a picture of the famous Quill Gordon mayfly, which had alighted upon our deck. Although not very widespread, it has nonetheless been regarded as the signature mayfly hatch. It is the first to appear each spring, and announces the start of a parade of hatches to follow.

Yesterday, I spotted a yellow quill on our deck (but none on the Jackson River the day before!). It is a large mayfly, and more widespread than the Quill Gordon. A # 12 or #14 yellow-tan mayfly pattern will imitate it quite nicely. Its presence typically means that spring trout season is well under way, and that the trout are starting to feed up-top more regularly. 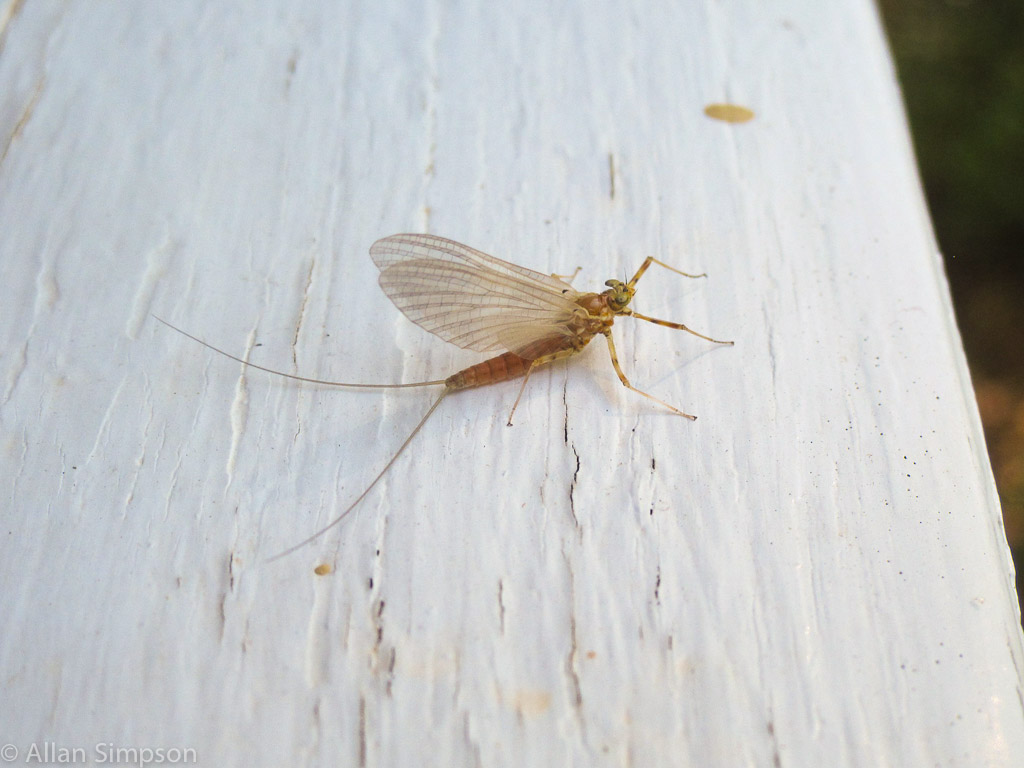 A friend of mine has been asking me to write an article about fly fishing knots. Being a minimalist, I have resisted. Specifically, I typically use only two knots, the old clinch knot and the double surgeon’s knot. With the introduction of welded loops on fly lines, I rarely have the need to use a nail knot, although I still carry a nail in my vest. However, another friend has saved me, and I’ll pass his internet-find along for others. The webpage Netknots.com is a great site for knot lovers. It features fifty-seven fly fishing knots, each illustrated with both still pictures, and dynamic animations- so enjoy!