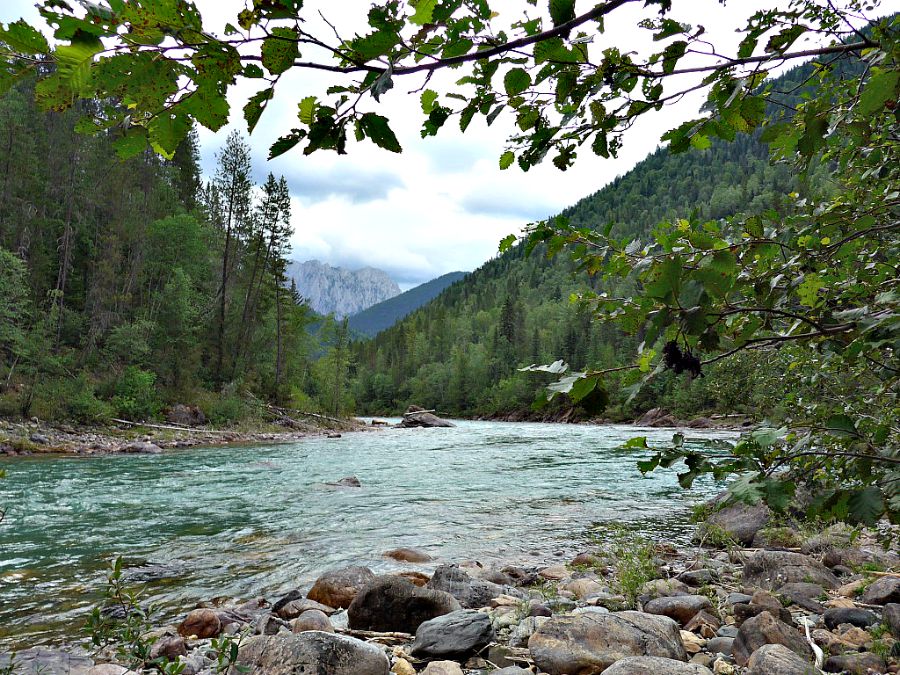 British Columbia is a storied fly fisher’s paradise first brought to the attention of the fly fishing world by the many books of famous author/fly fisherman Roderick Haig-Brown. He living on Vancouver Island, and his fishing and writings were mainly centered on the coastal rivers of British Columbia and their native fish, salmon and steelhead. But further inland lies a myriad of streams filled with wild, native trout, including Kamloops’s rainbow, westslope cutthroat, and bull trout. This summer, our friends Donna and Kevin, were visiting us in Montana’s Madison River Valley, and expressed an interest in a side trip. We decided to head north to British Columbia, a day’s drive away, and fly fish the streams on the eastern side of the Rockies. This article, “Destinations – Fly Fishing British Columbia” recounts some of the highlights of that trip.

We quickly settled on staying in Fernie, a small town of about 5,000 people, straddling the Elk River. Formerly a coal mining town, it has transitioned into a four seasons resort community, featuring skiing, mountain climbing, hiking, biking, river rafting, and of course, fly fishing. It offers a variety of lodging accommodations, and both casual and fine dining. But the local brag is that the nearby streams offer the best dry fly fishing in the world!

Unfortunately for us, the settling pond of an old coal mine north of Fernie breached a few days before our arrival. Although there was no associated fish kill, the massive release of sediment into the Elk River changed it into pea soup. We therefore needed some advice and headed for the local fly shops. We chose the Kootenay Fly Shop & Guiding Co., where we met the owner, Gordon Silverthorne. We explained that our preference was to wade rather than fish from a drift boat, and to fish on our own. Out came the maps, and after an informative discussion with Gordon about the local streams in British Columbia, as well as nearby streams in Alberta, we decided to fish the Wigwam River southeast of Fernie. We purchased some flies Gordon recommended for the Wigwam, and left the shop assured of a thirty-trout day.

The following morning, after an early breakfast, we headed for the Wigwam River. Unfortunately, some of the road signs did not agree with our maps, and we found ourselves wandering about in a beautiful wilderness, but nowhere near our destination. After a good  deal of backtracking, we finally found the river, and parked a few hundred feet from the stream. Given the condition of the Elk River, the premier stream in the region, we were not surprised that there were several other fly fishers already there. But after walking a few hundred yards downstream, we had the river to ourselves, and were able to fish for several hours without interruption.

Although it wasn’t a thirty-fish day for any of us, we did catch plenty of trout, almost all native western cutthroat. There was a mahogany fly hatch for several hours, and the trout were looking up, providing us with a day of dry fly fishing. We mostly used #14 parachute patterns and Quigley-type emergers. The average fish, as seen below, ran in the low to mid teens, was heavy-bodied with bright colors, and had a lot of fight for its size.

Kevin fished a deep run where we could see several bull trout holding, and managed to hook one on a streamer. After a good fight, he executed a perfect long distance release, denying me a picture, but here he is with a rainbow.

That evening, we returned to the Kootenay Fly Shop, and visited with Gordon again. After another discussion of our stream options, he suggested that we take a drive over to the Kootenay River Valley, and see if the Bull River, a tributary, had cleared from recent rains sufficiently to fish. After another beautiful drive, we found the mouth of the Bull River, where we watched a pair of beaver swimming about. The water was somewhat colored, but we felt it would be fishable upstream, and made plans to do so the following day.

We returned in the morning, drove upstream into a canyon, and fished several beautiful stretches of water.

Mahoganies were again the major hatch, and the fish were taking flies on the surface. As was the case on the Wigwam, we caught healthy, heavy bodied, westslope cutthroat trout.

We left the following day, with plans to return. A few of the nearby rivers left unfished include the Elk, Michelle, Kootenay, Columbia, Oldman, Crowsnest, and Flathead. For the dry fly fisher, this region of British Columbia would be hard to beat, with many healthy watersheds, filled with eager, native trout. Is it on your bucket list?