The idea of going to Kamchatka to fly fish was first thrust into my conscience a number of years ago by one of my fishing buddies, Jason. He had been there as a college student to study a unique fauna, and longed to return in order to fly fish. However, the airline that flew from Anchorage to Petropavlovsk, the only airport in Kamchatka, had suspended service, dashing our plans. Several years later, my son Matt surprised me by gifting a two-week trip to Kamchatka to celebrate my upcoming retirement. Jason joined us, and what unfolded was the best fly-fishing experience of our lives. This article, ” Destinations- Fly Fishing Kamchatka, Russia”, relates some of our experiences.

To orient you, Kamchatka is a peninsula in far eastern Russia, north of Japan, and across the Bering Sea from Alaska. It is roughly the size of California, with a population of only 350,000 people. Most of the populace is clustered in the Petropavlovsk area at the southern tip, site of an important naval base. Because of the strategic military/intelligence operations located there, the peninsula was closed to non-military Russians and all non-Russians following WW II. It wasn’t until the end of the cold war, in 1990, that Kamchatka was re-opened.

Much of the peninsula is being preserved through conservation set- asides. As a result, it remains the world’s largest, unspoiled, hardwood wilderness. There are over one thousand rivers on the peninsula. They are home to all six species of Pacific salmon, arctic char, kundzha, and its native trout, the rainbow. Most streams have not been fished in modern history, and can be reached only by helicopter.

The first American to explore these waters was Mike Michalak, owner of The Fly Shop, in Redding California. We booked our trip through The Fly Shop.  The package included transportation from Petropavlovsk, guides, rubber rafts, jet boats, tents, sleeping pads, food and cooks.

The first week, we rafted and camped along the Rossoshina Two River, a tributary of the Tigil River.  The Tigil drains into the Sea of Okhotsk, which separates the Kamchatka peninsula from mainland Russia. Our guides had scouted it out five or six years prior, to ascertain the presence of suitable campsites and landing areas for the helicopter. It had remained unfished since then! Here is a picture of one of our typical overnight campsites. 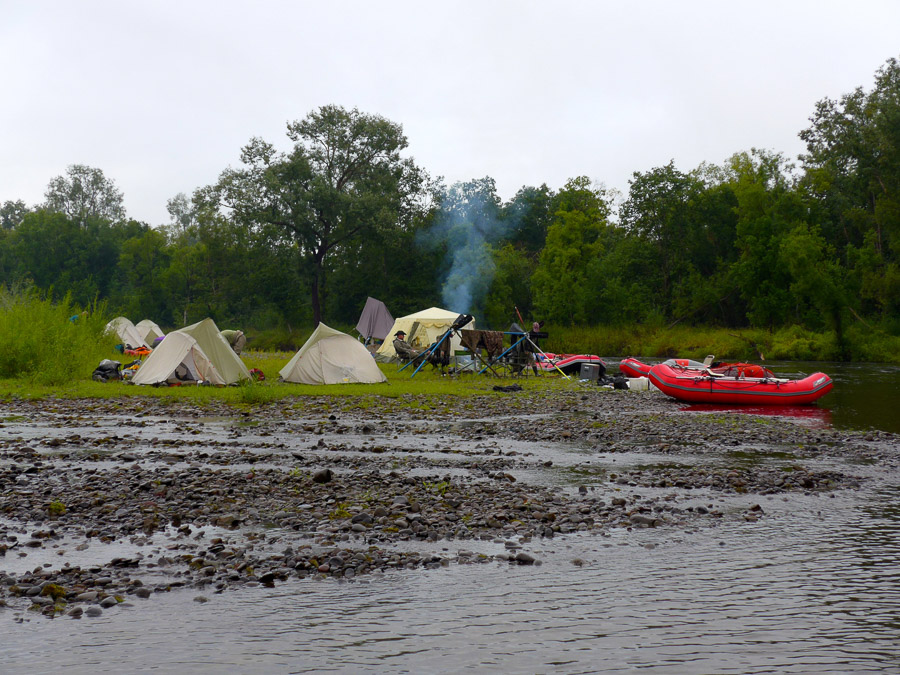 Campsite along the Rossoshina River in Kamchatka, Russia

We used the rafts to move downstream each day, but waded to fish. 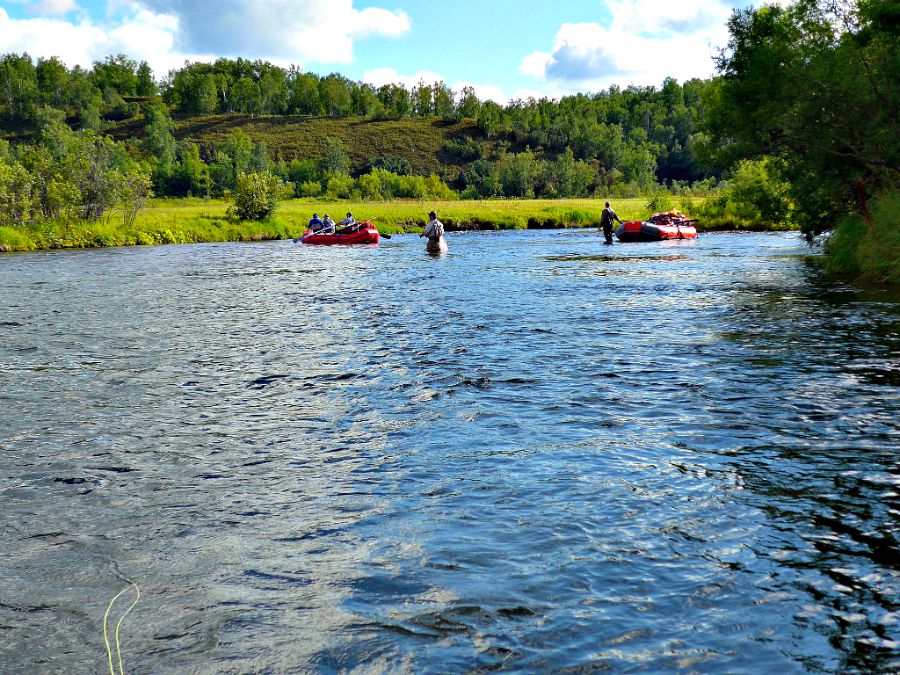 The waters were cold and clear. Several species of salmon were almost always visible, as they worked their way upstream to spawn. In the picture below, brightly colored coho salmon are easily seen, and gray colored chum salmon are also visible. 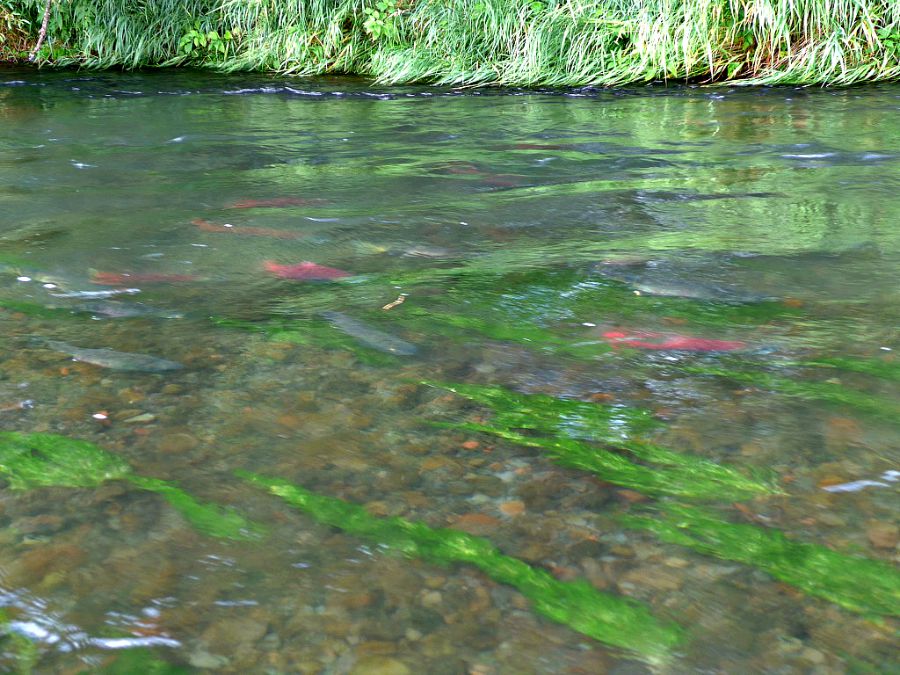 Of course, where there are salmon, there are bear. Bear-paw prints were frequently seen, and several of the print-makers as well. 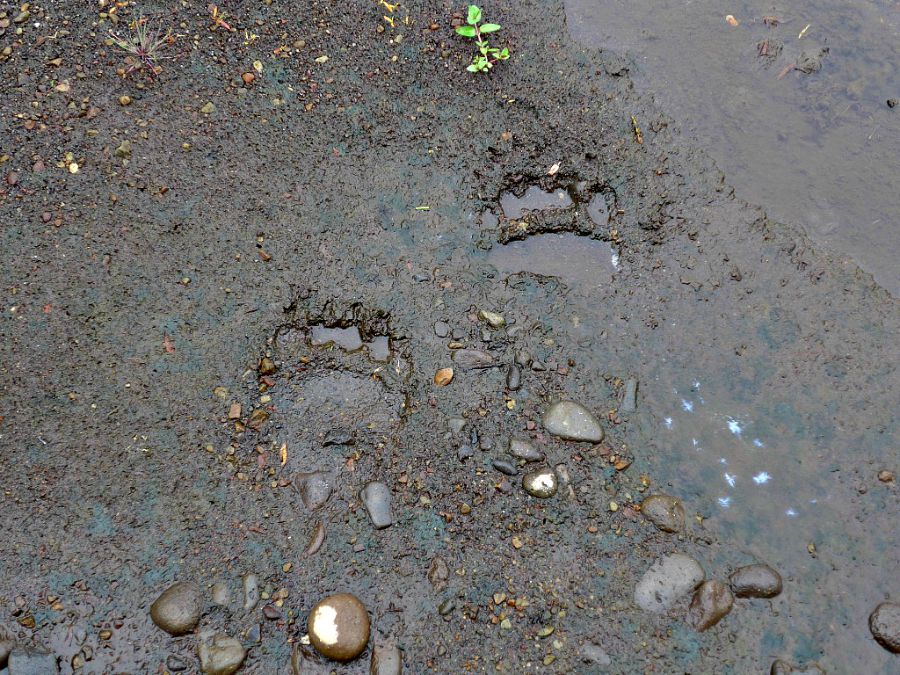 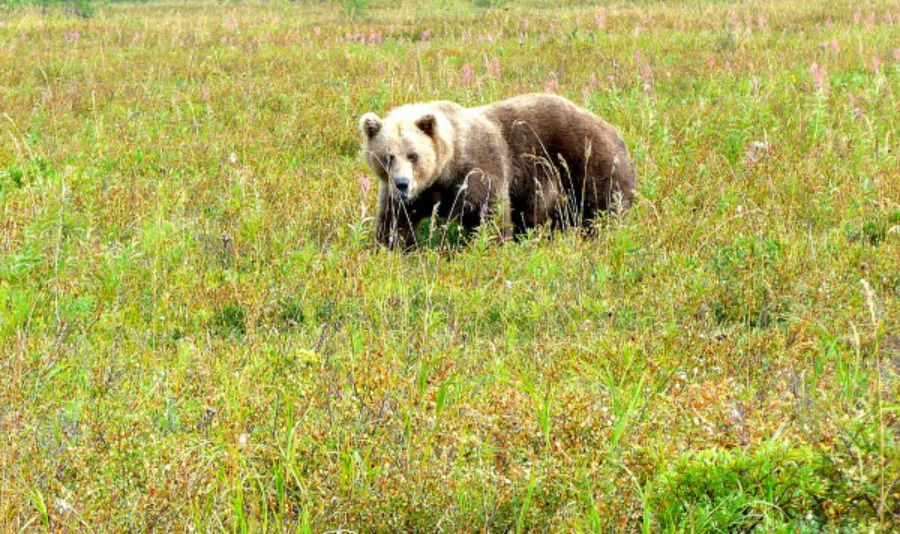 The bears mostly left us alone, vanishing into the brush if they saw us. They never came into one of our camps.

The Rossohina Two  is a moderate sized stream and easily waded, with an algae-free, brightly colored, cobble-stone bottom.

We fished typical streamers, some egg-sucking leech patterns, and mouse patterns. Mouse fishing was a new experience for us, and very effective. It was a bit like fishing poppers for bass, and produced slashing surface takes. Here is a picture of the two patterns we used, the Morrish Mouse and Mr. Hankey, which has a trailing hook. 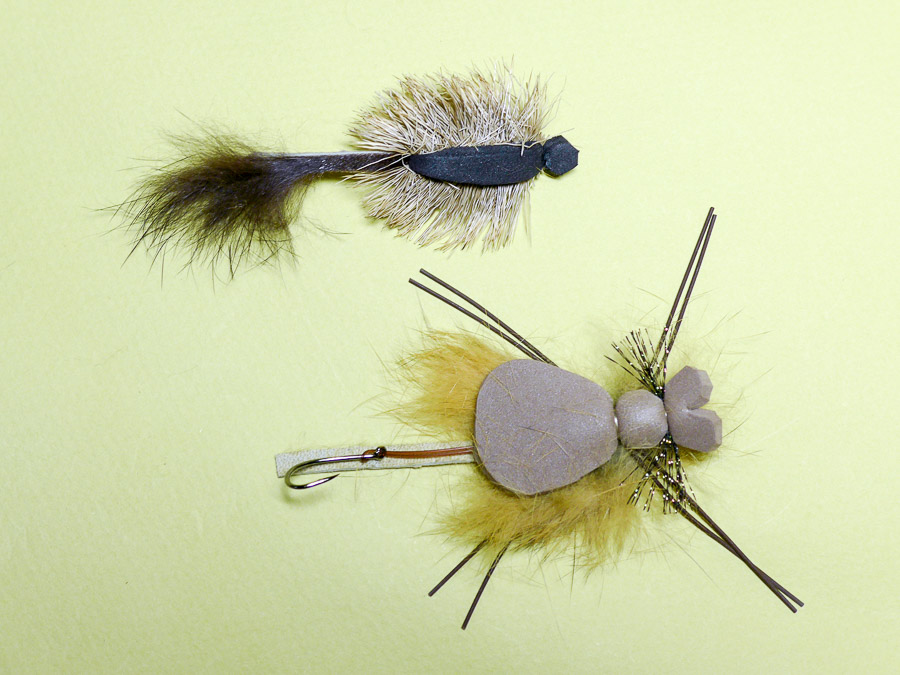 Honestly, it didn’t seem to matter which method we chose. Whether fishing on the surface or subsurface, our rods were bent most of the time. We easily caught 60-100 fish daily. Surface fishing produced a higher proportion of rainbows, while subsurface produced a 50/50 mix of rainbow and salmon/char. The fishing was so good, that we came to regard 16-20 inch rainbows as merely average, and soon reserved calls for the camera for fish in the 25-inch or better range. Here are a few shots- 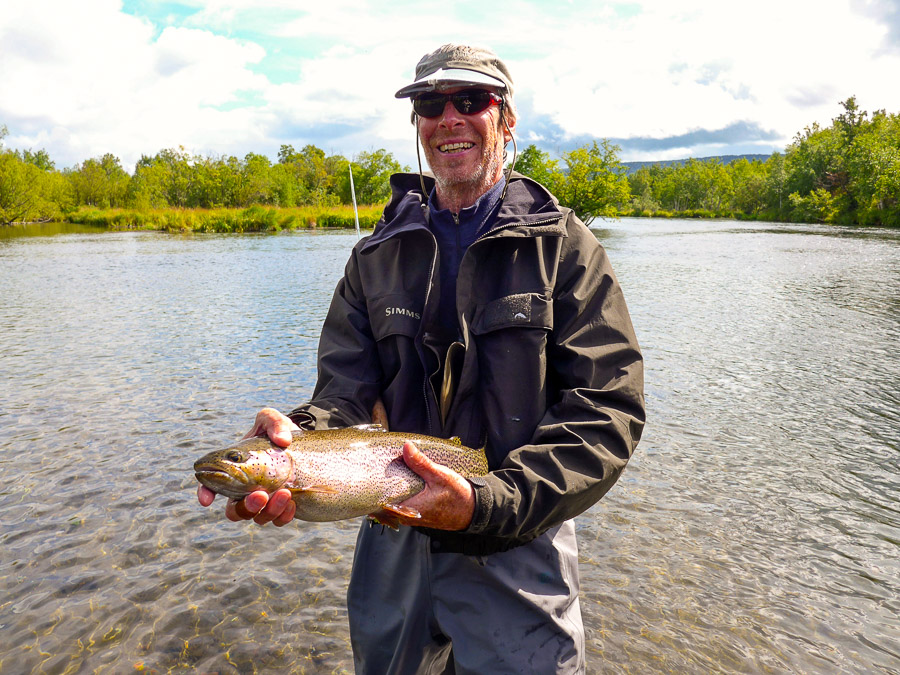 Al with an “average” rainbow trout 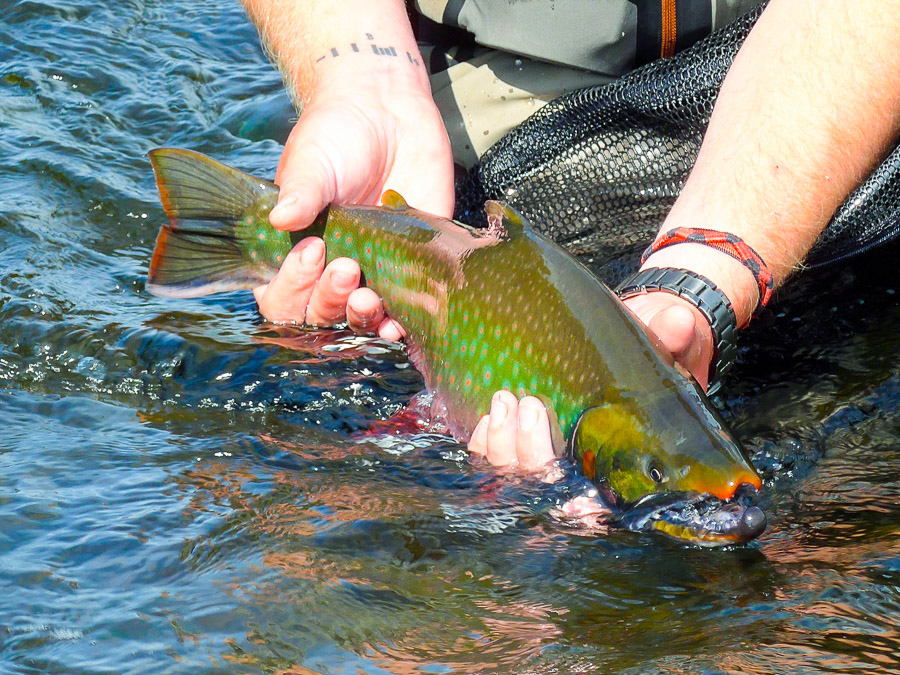 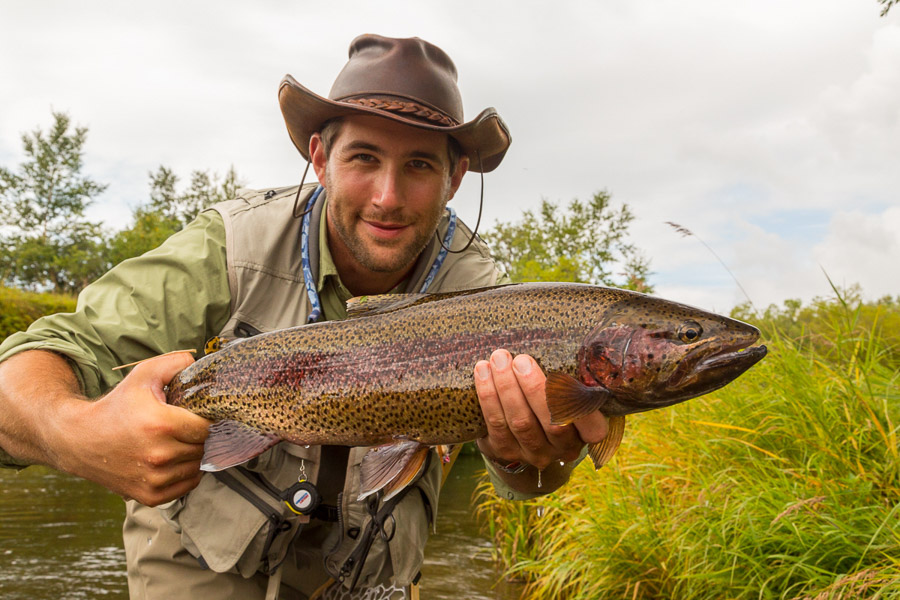 Matt, with a trophy trout

Jason, about to do a “Jimmy Houston”

Al and guide with another rainbow trout 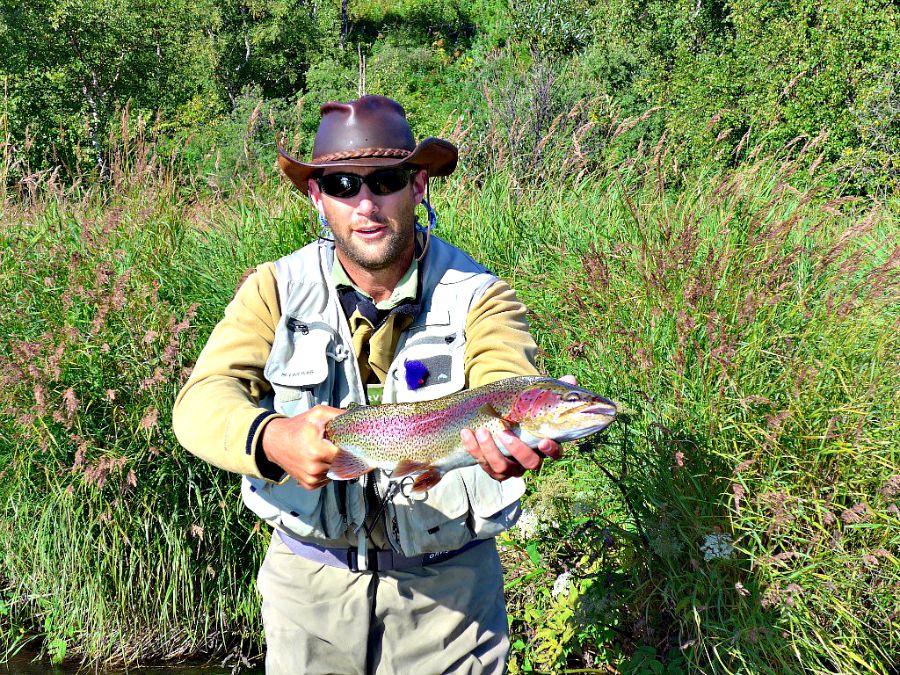 Matt with a rainbow trout

After a week, we were helicoptered to the Sedanka Spring Creek. The Fly Shop maintains three rustic camps, with bunkhouses, a kitchen/dining area, and a bath house with warm showers. After a week of cold-water PTA’s, the warm showers felt wonderful! This year, only twenty-four fly fishers fished this stream. 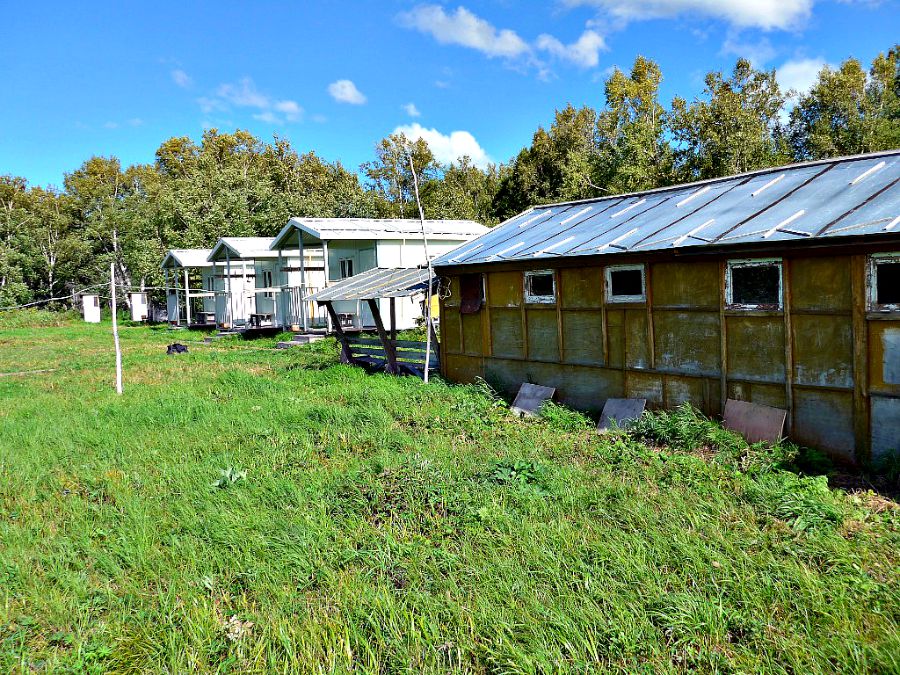 We used jet boats to access desirable sections of water to fish, as well as move from one camp to another. 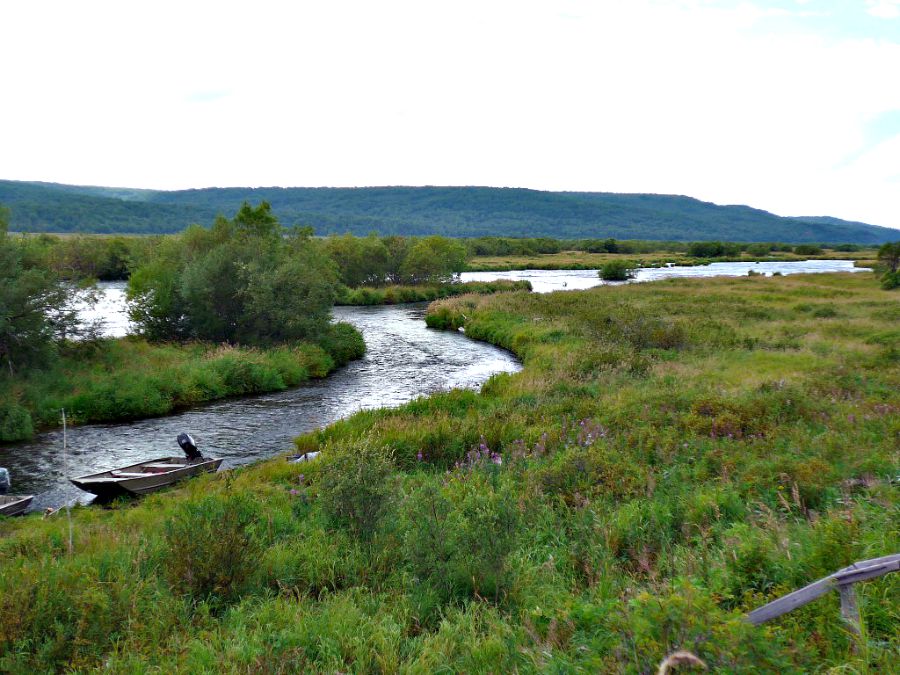 Some sections of the Sedanka reminded me of the Henry’s Fork, with wide-open, flat water, hatches and rising fish. But unlike fishing the Fork, we used #12 dry flies, and the rainbows took them eagerly! 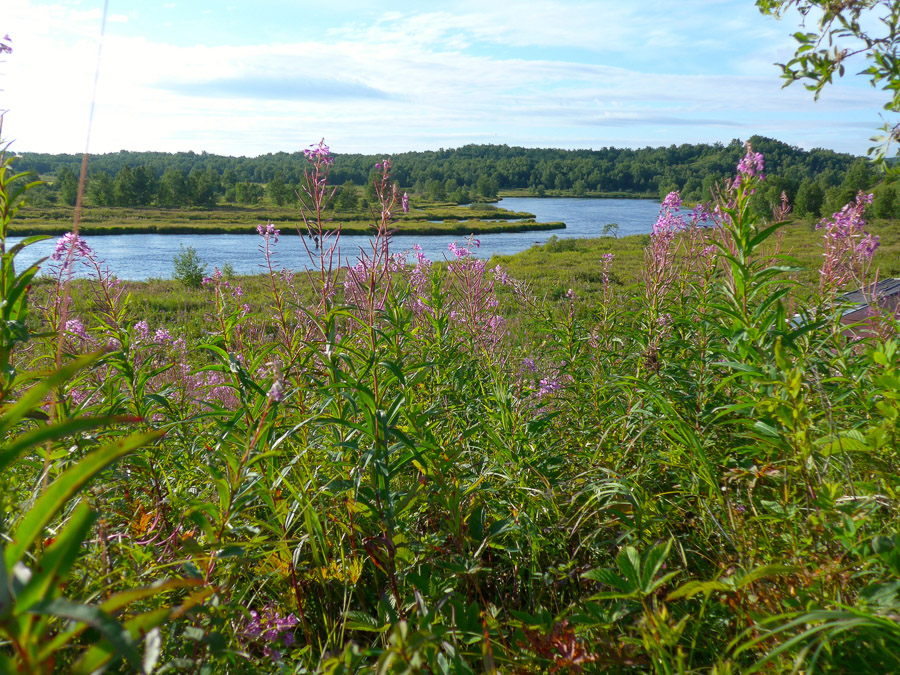 It is difficult to describe the magnificence of Kamchatka. It is probably little different than the America that Lewis and Clark explored over two hundred years ago, aptly described in “Undaunted Courage” by Stephen Ambrose. If you want to see, feel and experience a true wilderness, with unspoiled, healthy watersheds full of big fish, you should put Kamchatka at the top of your “fifty places to fly fish” list. The folks at The Fly Shop are very friendly and will be happy to talk with you if I have peaked your interest in the slightest. The only drawback thus far has been the need to readjust our expectations back here, stateside, even in Montana! 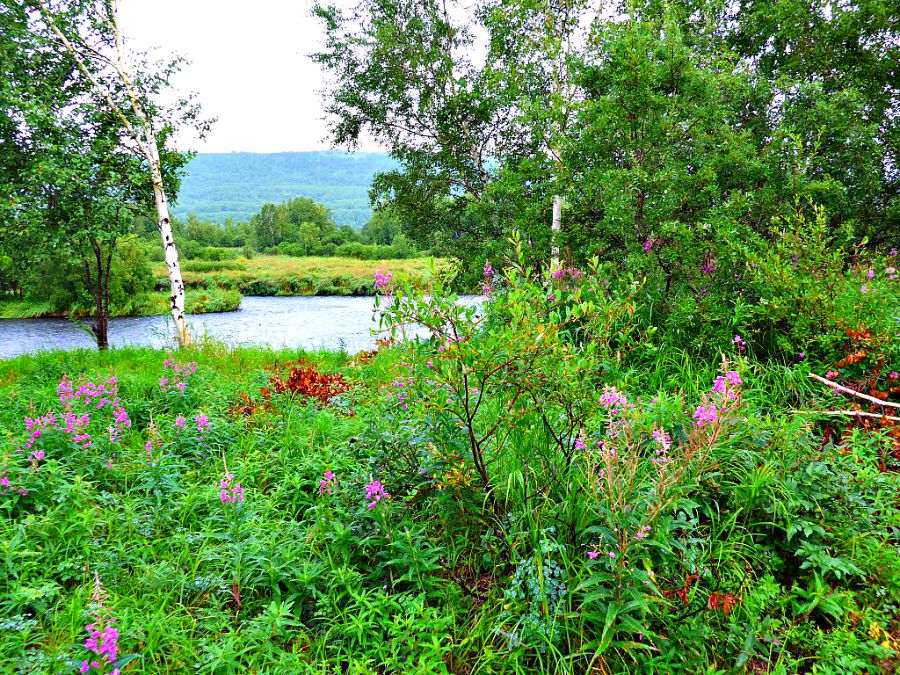 Matt with a rainbow trout