In the past few years, Euro nymphing, or tight-line nymphing, has become all the rage. It has been hailed as a new, and very effective way to fish for trout. But I beg to differ. Effective it is, new it is not!

English angler, G.E.M. Skues, began the development of tight-line nymphing in the latter part of the 19th century. He discovered that rising trout that refused a dry fly, would often take a nymph, fished in the film. After studying the mayfly nymphs in his stretch of stream, he created several unweighted, imitative patterns. He fished them much like dry flies, casting them upstream of rising fish. As they drifted downstream to a waiting fish, the line was kept tight, facilitating a quick hook-set.

But Frederick Halford, the “Father of dry fly fishing”, was opposed to nymphing. He persuaded the Fly Fishers Club of London, which controlled most of the trout fishing on the southern chalk streams of England, to ban the tactic. He felt it was unsportsman-like, i.e., too effective, and resulted in trout that were leader-shy. As a result, they dictated that only dry flies could be used on their streams, and cast only to rising trout. Thus, further development of the tight-line nymphing technique was arrested in England.

Consequently, it fell to American anglers to further the development of tight-line nymphing. One of the first was Edward Hewitt. In 1933, he wrote “A Trout and Salmon Fisherman for Seventy-Five Years“. In it he described the technique of tight-line nymphing, contrasting it from wet-fly fishing. While wet flies were usually fished downstream, he fished his nymphs upstream, with a floating line. The leader length was varied according to the speed of a stream’s current. Short leaders were used in faster, choppier waters, and longer leaders in slower, clear waters. He added weight to his nymphs and fished them well below the film. I believe this is the first description of fishing nymphs in the deeper portions of the water column.

Forty years later, in 1973, Ernest Schwiebert’s encyclopedic “Nymphs, volume I” was published. He furthered the development of nymphing, advocating the use of imitative nymph patterns. Similar to Hewitt’s writings, he described fishing the entire water column, and emphasized the importance of keeping a tight connection with the nymph.

So why all the noise about Euro nymphing? In my opinion, it is because  most American anglers pursue the sport on a casual basis. It takes a great deal of time, practice and missed strikes to become adept at tight-line nymphing. Hence, in recent years, most American anglers have learned to nymph with the “suspension” technique, dropping a nymph from an indicator or large dry fly. This is a much easier technique to learn, yet catches many fish. As a result, tight-line nymphing was nearly forgotten, practiced mainly by those of us who are “long-of-tooth”.

In the meantime, European anglers finally shed the shackles of Halford and the Fly Fishers Club of London. As a result, nymphing began to re-emerge on the European continent during the latter part of the twentieth century. The trout waters in Europe are clear, smaller and more shallow than many of our streams. Thus they are not particularly well suited for suspender-nymphing. Consequently, European anglers turned to nymphing with the tight-line technique.

Euro-nymphing is practiced with floating lines, long leaders and two or three weighted nymphs. The rig is fished with a ten or eleven foot rod, which is held aloft, i.e., “high-sticked”. To better detect strikes, a colored portion of monofilament, or “sighter”, is added to the leader. The sighter is adjusted for the water depth. Ideally, the sighter is only partially submerged, as shown below. 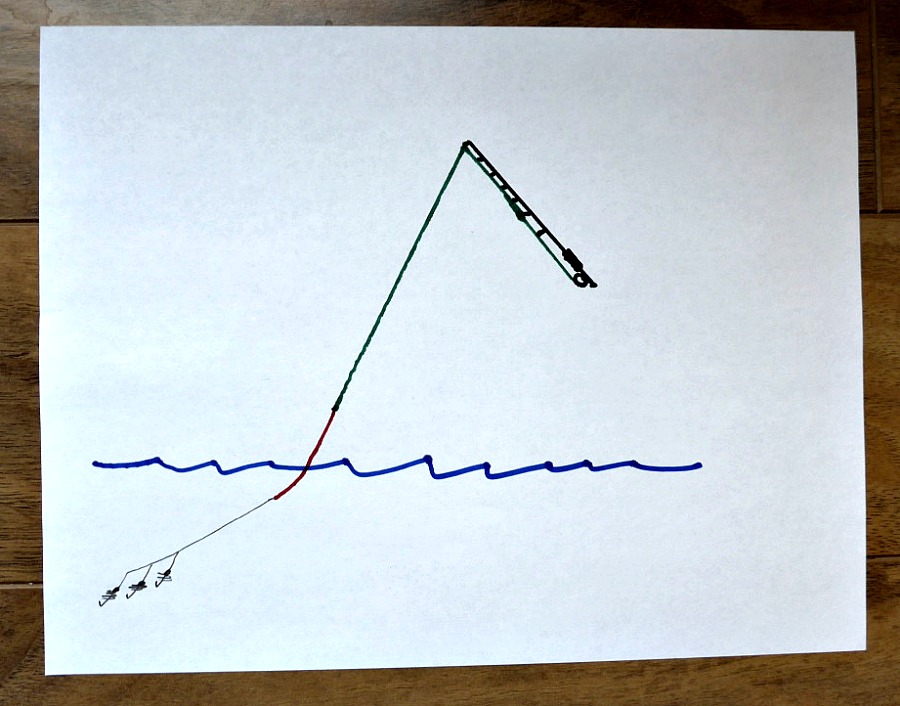 Any untoward movement or deviation of the sighter suggests a possible strike, and the hooks are set. If a hook-set finds no resistance, the rig is lowered and the drift continued.

Little of “Euro nymphing” is new, having evolved over a century and a half. Rod length has cycled from long to short and back to long over the centuries (see Fly Fishing Tactics – Fly Rod Length). And Orvis manufactured a leader over thirty years ago with an orange butt that gradually became clear as it tapered to the tip. It was designed for tight-line, high-stick nymphing. But Orvis discontinued its manufacture, presumably due to low sales, indicating that interest in tight-line nymphing in America had faded. Thus we are beholding to our European brethren for resurrecting interest in and further perfecting this old and highly effective method of fly fishing.

Tight-line, or Euro nymphing, requires the acquisition of a high degree of skill. But once mastered, it allows one to fish more types of water, more thoroughly, putting more fish into the net. But let’s set the record straight. It is not new, and most of its development occurred on the American continent, not the European! Whatever it may now be called, Czech, French, Euro, or simply tight-line nymphing, it is a very effective  technique for trout fishing. If you want to elevate your game, and are willing to put in the time and effort to learn this technique, you will be handsomely rewarded.

Is Montana’s Madison River Being Fished to Death?

I noticed a change last year, 2019, when fishing my home water in Montana, the Madison River. There were fewer fish, especially larger fish. So I was not surprised when the Montana Fish Wildlife & Parks agency released the results of their fish counts. They reported a 40% decline of brown and rainbow trout in […]