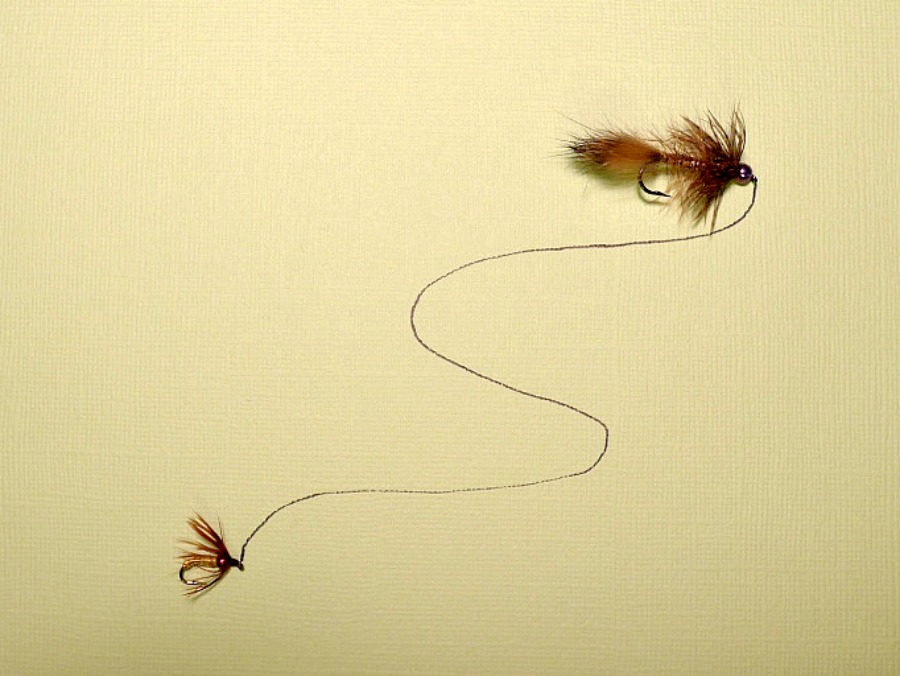 Many’s the occasion that I have been asked how many flies I fish with at a time. In truth, I fish with as many as regulations allow, which in most instances is two. Why do I put up with the potential hassle of tangled flies and tippet? Because fishing tandem flies offers trout more choices. Sometimes I fish with imitations of two different insect species, and sometimes with two stages of the same specie. This allows me to more quickly identify trout’s preferences than fishing with only one fly at a time. In addition, I find that both flies are usually taken to some degree. This leads me to believe that more fish wind up in my net fishing with tandem flies.

Most fly fishers are familiar with the “hopper-dropper” tandem, but this is just one of many useful tandems. So let’s look at some of the combinations that I find  most productive, beginning with subsurface tandems.

I love to trail a small nymph when fishing with streamers. This is especially productive in the fall, when brown trout are spawning and looking for a big meal. At this time of year, hatches are sparse, and nymphs are still small, having just hatched over the summer. In my experience, when fishing the streamer-nymph tandem, brown trout will usually take the streamer. But if rainbow trout are also present, they will more often take the nymph. Thus, fishing with this combination of flies increases the chances of catching fish.

I tie the trailing nymph hook-eye to hook-eye, as shown above. Connected in this fashion, the connecting tippet will not interfere with a fish trying to take the lead fly, in this instance, the streamer. I also think that fewer tangles occur while casting if the flies are connected in this manner.

My preference is to trail the smaller nymph behind the streamer. This allows me to use lightly weighted nymphs, which move very freely. I keep the connecting tippet short, usually 12-18 inches.

Another approach is to use a small metal loop, attached to the leader-tip. Tippet of different size and length can then be tied from the loop to each fly separately. They rarely tangle, and neither interferes with the hooking of a fish.

This is my favorite combination of flies when fishing outside a hatch in the spring and summer. According to gut-sampling authorities, most of a trout’s diet consists of nymphs. Thus, if there is no hatch present, I want to fish subsurface. I use a small wooly bugger, size 10-12, trailed with a size 14-16 soft hackle fly. If possible, I cast upstream and dead-drift the flies until they are downstream of me. Once downstream, I will stop the drift several times, and bring the flies nearly up to the surface. Jim Leisenring developed this technique, which is still referred to by his name, the “Leisenring Lift”. It is meant to imitate an emerging nymph or pupa.

Europeans have been fishing with nymph-nymph rigs for centuries.  They usually use three nymphs, two or all three of which are substantially  weighted. It is fished with a floating line, and a long leader, fifteen feet or more. This rig is used for fishing both streams and stillwaters.

In the states, we are generally limited to two, single-hook flies. If fishing with two small nymphs, I will vary the size and/or color. Rather than heavily weighting the nymphs, as the Europeans do, I prefer to use a sinking-tip line and unweighted or lightly weighted nymphs. This gets the flies down in the water column, and allows them to move freely and more life-like. If faced with skinny water, as often happens in the fall, I will switch to the European method, and use a floating line. It is more stealthy, and the flies ride a bit higher in the water column, catching fewer stream-bottom snags.

When fortunate enough to fish streams healthy enough to have stoneflies, I will often fish with a stonefly nymph. I attach it first, and use a smaller nymph imitation for the point fly.

Whichever nymph-nymph tandem I fish, I keep the connecting tippet relatively short, 12-18 inches. I think this helps keep me “connected” to the point fly, that is, free of slack. This is important in order to feel subtle strikes, which is always a challenge when fishing subsurface.

I think this is the most effective way to fish a hatch. During a hatch, emergers, bugs struggling to break through the surface film, outnumber the visible, floating duns. In addition, they are more vulnerable than the duns. Thus, although trout can be seen feeding on the surface, many more will be feeding on the trapped emergers just below the surface. Among them will be the largest trout, which often remain reluctant to come to the surface, even during a hatch. Consequently, dun-emerger tandems will hook more fish than a dun alone, and increase the chances of catching “Bubba”.

The picture below displays a humpy attractor fly, with a trailing Quigley Cripple. I think the Quigley pattern is a very effective emerger, hanging vertically in the film. I use 12-24 inches of tippet, and tie the flies hook-eye to hook-eye.

Another effective tandem to fish during a hatch is a dun with a trailing, unweighted nymph. The nymph will sink just an inch or two below the surface. It cannot be seen by the fly fisher, and therefore, the connecting tippet should be shortened, to no more than 6-10 inches. Otherwise,  many takes will be missed. For further reading, see Presentation – Fly Fishing Emergers.

This is a productive pair of tandem flies when searching between hatches with dry flies. Spinners are often present well after a hatch, having collected in quiet eddies. In addition, many hatches occur during the night. Consequently, the dun-spinner tandem is a very productive way to search the water at daybreak, while waiting for the day’s first hatch to occur.

When fishing two duns, I usually try flies of different sizes, as well as pattern or silhouette. Productive tandems I often use are an elk-hair caddis/X-caddis during a caddis hatch, and a parachute Adams/comparadun during a mayfly hatch. But any imaginable combination can be tried.

The picture below illustrates the use of an “attractor fly”, the royal Wulff, and an X-caddis. When faced with refusals amidst a multi-hatch scenario, a small attractor fly will often “unmatch the hatch”. Mike Lawson, of Henry’s Fork fame, discusses this in “Spring Creeks”  (http://amzn.to/2os5rrA).

The classic terrestrial/nymph tandem is of course the “hopper/dropper”, as seen below. It is a very productive tandem in the summer when fished between hatches. I often use a cricket or beetle pattern rather than a hopper pattern. If using a small or lightly weighted nymph, an ant pattern can also be used for the dry fly.

Due to the weight of the trailing nymph, I tie these flies hook-bend to hook-eye, as seen above. This is usually necessary to keep the dry fly properly oriented. If tied hook-eye to hook-eye, the nymph tends to pull the dry fly into a vertical position, with most of the fly sticking above the water surface.

The length of tippet should be adjusted according to the depth of water being fished. I generally use a length one-and-a-half to two-times the depth of water. I make further adjustments as needed, to keep the nymph near the bottom of the stream.

I often try this tandem in the summer as well. An ant pattern trailed behind a hopper or cricket pattern can be deadly. I float it bankside, under overhanging grasses and bushes. I again tie them hook-eye to hook-eye, 12-18 inches apart.

These are just some of the tandem flies that I have found to be effective. I suggest that you use your imagination, and discover the tandems that work best on your streams. If you do, I’m sure that you will catch more fish!