It’s almost March, yet here in the Piedmont it is still winter this year. I can hear Western fly fishers chuckling when they hear or read of complaints of a harsh winter from their Mid-Atlantic brethren. But the polar vortex has rendered conditions not seen in Virginia in at least the past forty years. The picture below depicts something I have never experienced before. The Jackson River, one of my favorite Virginia trout streams, is nearly covered with ice. 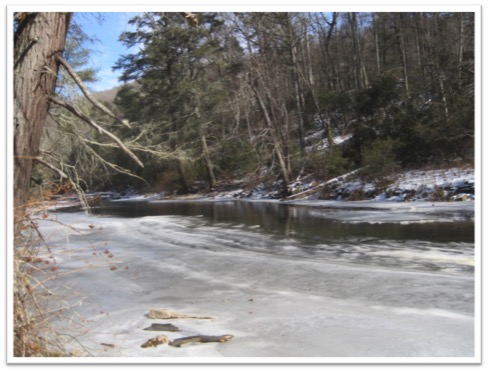 So what is an avid fly fisher supposed to do in times like this? I’m tired of tying flies, and I can’t take the time or spend the money to go south of the equator. And I’m almost finished with Paul Schullery’s “Fly-Fishing Secrets of the Ancients: A Celebration of Five Centuries of Lore and Wisdom”. Well, for me it has been a time to ponder and practice my fly casting basics. As I grow older and must deal with my changing physical abilities, understanding and mastering the fly casting basics has become ever more important in order to continue to cast efficiently and accurately.

Most casting instructors would agree that the basic casting motion can be described as a speed-up-and-stop. This is followed by a pause, which lengthens as more line is being cast. I think there are three important elements that must be understood to translate the casting motion into an effective cast. They are rhythm, the arc of the rod’s path, and the contributions of the hand and forearm.

Let’s begin with rhythm. If you don’t dance, don’t worry, I’m not referring to that kind of rhythm. In contrast to every other sport that may involve a bat, club, racket or stick, the backcast is a dynamic component of fly casting. In the other sports referred to, the sporting implement is slowly positioned behind the sportsman, and readied for a forceful forward swing or stroke. But in fly casting, the backcast should mirror the forward cast, in force, speed and direction.

If one is using a slow to medium action rod, the rhythm is a bit like a waltz, slow-fast-paaause, slow-fast-paaause. If one is using a fast action rod, it’s more like a cha cha, that is, cha-cha-chaaa, cha-cha-chaaa. The paaause and chaaa lengthen as the length of line outside the rod lengthens. This  allows the looped line to unfurl and flex or load the rod.

If one compares the casting action of beginner and intermediate casters to more expert casters, the most striking difference lies in the backcast. The less expert casters underpower the backcast and hurry the transition to the forward cast. This doesn’t allow the rod to flex, and eliminates its recoil from contributing to the forward cast. Thus a casting motion that does not fully load the rod, leads to short, underpowered casts. In contrast, a casting motion with good rhythm and balanced force in both the forward and backcasts, will result in a fully loaded rod, and a good forward cast.

Next let’s discuss the casting arc. We’ve all heard the phrase, “move the rod from 10 o’clock to 2 o’clock”. This is of course an approximation of the actual casting arc, which will vary under different circumstances. But I think it is helpful to understand the physical principles at play. 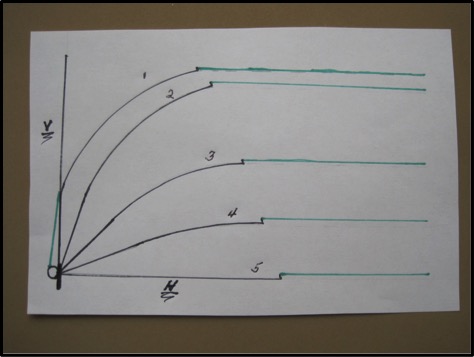 A second principle, adequate force, is necessary if the rod is to be flexed or loaded to its maximum potential. Force is generated by the speed and length of the casting arc. If the rod is stopped in the vertical position to maximize the potential flex, the casting arc is shortened. This reduces the force that can be applied to the line, and may not fully load the rod. If the rod isn’t stopped until it reaches rod positions 2, 3 and 4, more force can be applied by virtue of the longer casting arc. However, this increased force is offset by reduction of the maximal flex of the rod.

Thus the ideal stopping point of the casting arc is a compromise or tradeoff between the generation of adequate force, and the maximal potential flex of the rod. Look again at the illustration above. Rod position # 2 approximates 2 o’clock, and nearly matches the theoretical maximal rod flex seen when the rod is stopped in the vertical position. The longer casting arc seen in rod position #2 allows for the application of greater force. Thus rod position #2 is a good stop-point, allowing a good casting arc and full flexing of the rod. The forward cast should mirror the backcast, that is, 2 o’clock would become 10 o’clock. So the old adage is helpful as one envisions the casting arc and tries to achieve maximal loading of the rod.

For very long casts, line-speed must be maximized. This requires a lengthening of the casting arc, without changing the stop-points. It is done by moving the base of the arc, that is, the butt of the rod. When doing this, it is very important to move the rod butt in a horizontal plane, parallel to the water’s surface. This will keep the tip of the rod moving in a horizontal plane, producing a line-path that is horizontal as well.

If the rod butt is moved up or down, the rod tip and line will also move up and down. This results in loss of force and accuracy. Large open loops will be formed, and lead to tangles in the leader and line, the so called “wind knots”.

To create a horizontal motion, the caster’s body is turned about 45 degrees away from the target. For the right handed caster the body is rotated to the right,  and vice versa for left handed casters. This allows the body to rotate backward and forward, much like a golf swing. The arm, rod and rod-tip may then easily move in a horizontal plane. This results in a lengthened casting arc, and produces more force and line speed.

Most fly fishers have learned to cast with the “thumb on top” grip. I think this grip has several disadvantages, especially for the beginner. The structure of the wrist joint is such, that this grip allows, virtually encourages, the rod to be dropped to the horizontal plane on the backcast. To see for yourself, just hold a pencil with this grip, thumb on top. Place your forearm in the vertical position, mimicking the rod position. While keeping the forearm upright, move your hand backward and forward. You will note that the pencil reaches 11 o’clock on the forward motion, and 3 o’clock on the backward motion.

As you have just demonstrated for yourself, the “thumb on top” grip allows a poor casting arc, with the rod-tip dropping too low on the backcast.  This is a problem that most beginners struggle to avoid. As previously discussed, it results in poor loading of the rod on the backcast. In addition, it allows the line to hit the ground or water behind the caster. Many flies have been lost, and rod tips broken when this happens.

Now rotate your hand 90 degrees counter-clockwise, placing the forefinger on top of the pencil. Put your forearm in the casting position, and again move your hand backward and forward. Note that the pen reaches 9 o’clock on the forward motion, and 1-2 o’clock on the backward motion. This more closely tracks a good casting arc. Thus the “finger on top” grip can assist with learning to cast with a good casting arc.

The grip also contributes to the accuracy of a cast. If you were to point to an object, would you use your thumb or your finger? I think virtually everyone would use their finger. You can test this with your pencil, gripping it first with thumb on top, then finger on top. Quickly point the pencil to several objects. I think you will find that the “finger on top” grip is more natural and more accurately points to the targets. Thus the “finger on top” grip can assist with casting accuracy. When fishing on a stream, accuracy is essential to presenting a fly to a feeding trout.

Lastly, let’s consider the hand’s contribution to the casting motion. It may again be helpful to use an analogy, this time the throwing of a baseball. If you pretend to throw a ball, I think you will discover that the throwing motion begins with the forearm, and ends with a rapid, forceful motion of the hand. This final thrust of the hand adds a great deal to the overall force and speed of the throw. In addition, it lets the fine-motor muscles of the hand guide the final direction of the throw.

A maximally effective casting motion similarly begins with a slower motion of the forearm, and finishes with a fast motion of the hand, for both the forward cast and backcast. In fact, when casting short to medium distances, little more than a forceful thrust of the hand is needed, provided that the other essential elements of the cast, rhythm and arc, are utilized properly as well.

Below is a link to our video of the overhead cast. As you watch it, note the quick, short casting arc, the stop-point, and the pause. The result is a nearly horizontal, untangled fly line.

So if winter is giving you “cabin fever”, you too may want to ponder and practice your fly casting. Yes, don’t forget practice, so that when spring finally arrives, you’re ready to hit the water with a good cast.

How To Fly FishFishing Techniques