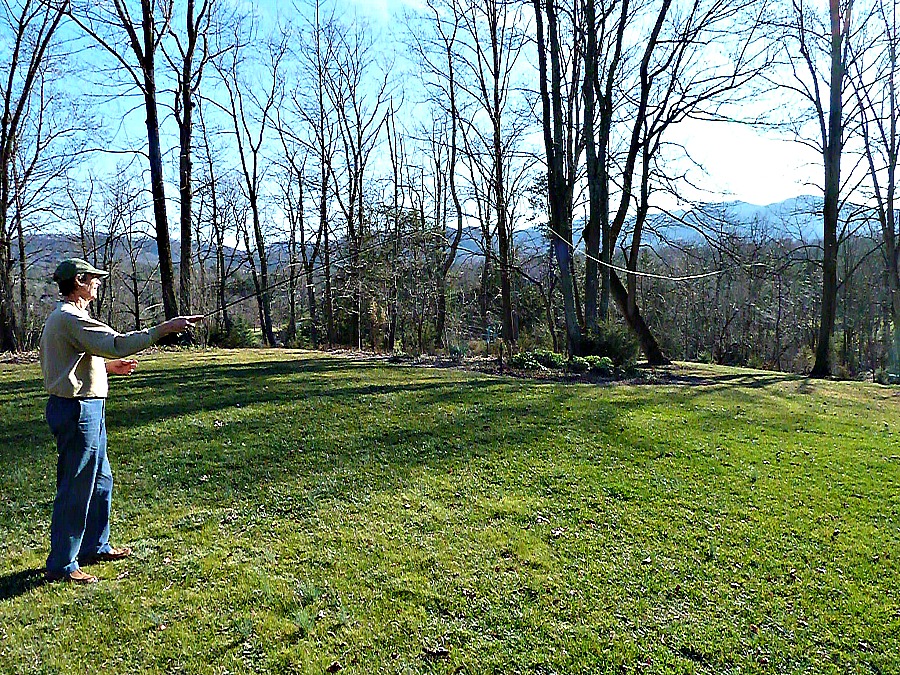 When teaching fly casting, I emphasize casting accurately to short and intermediate distances, that is, less than fifty feet. But once a caster has acquired that level of skill, I will often make the statement that they should learn to “cast a hundred feet”. This is often rebuffed, and rightfully so, as fly fishing for trout rarely, if ever, requires one to cast a line that far. In this article, “Fly Casting for Distance”, I will explain my rationale for learning to cast a hundred feet, review the casting mechanics necessary to cast such a distance, and provide some practice tips.

Rationale for Learning to Cast Far

I think that there are many reasons to develop one’s casting skills such that a hundred foot cast is makable, even if it is never used while actually fishing. First in my mind is the reduction in the number of false casts needed to work out sufficient line. A skilled caster generally requires but a single backcast when casting on a trout stream. Over the course of a day, this eliminates several hundred false casts. This reduces the likelihood  of developing arm fatigue with its attendant sloppy, inaccurate casts. Reducing the number of false casts also reduces the likelihood of spooking fish by casting over or near them.  It also reduces the chance of getting caught in streamside trees and brush, or developing “wind knots”.

When one is able to cast a hundred feet, casting intermediate distances, i.e. into the trout zone, becomes easy. Consequently, when streamside, the total focus can become accuracy. Accuracy is the most important element of casting when fishing, and helps assure a good day on the stream. Other advantages include turning over even the heaviest of flies, fully straightening the line and leader at presentation to assure readiness for that instantaneous strike, and the ability to cast into a heavy headwind.

First let’s set some parameters or expectations for our discussion. The line weight of a rod, its length and action all contribute to the potential to cast a defined distance. Short, flexible rods may be great for small trout streams that demand short, accurate casts with only a little line to load the rod, but they are not designed to cast longer distances. In contrast, long, stiff rods may be great for long distance saltwater fishing, but they are not designed for the demands of a trout stream. So for our discussion, I will anticipate that casters are using a nine foot, five or six weight rod, with a medium-fast action.

Components of the Casting Motion

While the ability to cast a hundred feet requires a modest degree of strength, it is most dependent upon the smooth integration of each of the components of the casting motion. The common impulse to overpower the cast is not the answer, as it introduces shock-waves into the line, causing it to collapse far short of its potential distance. So, I will review each component of the cast, and discuss its contribution to the desired end-result, a long and accurate cast.

Like all sports’ motions used to throw or hit a projectile, a good casting motion begins with the lower body. Most long-distance casters assume a stance with the foot opposite the casting hand one or two feet forward of the casting-hand foot. That is, for right-handed casters the left foot is usually forward, while the opposite is true for left-handed casters. The feet are angled slightly toward the casting side. This stance helps in two ways. The first is that it allows the legs to contribute to the casting motion, moving the body in the direction of the cast, on both the forward and backcasts. In addition, the body is positioned in an “open stance”, that is, angled toward the casting side. This allows for a rotational movement of the body, allowing the large core-muscles of the trunk to contribute to the casting motion as well.

As with shorter casts, the rod must be moved briskly through its casting arc, using primarily the muscles of the forearm with a finishing snap of the wrist. Until the final presentation cast, the tip of the rod must move in a nearly horizontal plane in order to keep the line moving horizontally. If the line is allowed to move off the horizontal plane, line speed will be lost. The forward and backward casts must be balanced, that is, a mirror image of one another, including the force applied and line speed achieved. The final forward cast should end with the rod in a nearly horizontal position, pointing at the target. This eliminates friction as the last bit of line shoots through the tip-top.

Following the brisk casting stroke, the classic casting instruction is to stop the rod abruptly, in a position just past the vertical. The sudden stop transmits the force of the casting arc through the rod and into the line. However, when casting long distances, a backward movement of the butt of the rod during the backcast, sometimes referred to as “drift”, can be used to increase the length of the casting arc. A longer casting arc will allow for the generation of greater force and line speed. In addition to increasing the length of the casting arc, backward drift allows for a greater contribution from the upper arm and shoulder muscles to the casting motion. Good line speed must be maintained to avoid a sagging line and obtain the benefit of the longer casting arc. In addition to maintaining line speed, the backward movement of the rod butt must be along a horizontal plane. Otherwise the rod tip will move up and down and cause the line to sag, and the loop to widen, both of which reduce line speed.

The grip used is probably not very important. Most casters feel that the thumb-on-top grip is the strongest grip and hence the best grip when casting longer distances. But those who use the forefinger-on-top or the forefinger-thumb-opposed grip (favored in Europe) would disagree. I suspect that the grip regularly used by a fly fisher leads to strengthening of the muscles most affected by the grip, and therefore becomes the strongest grip for that particular fly fisher.

The last necessary component of the cast when casting for distance is the “haul”. Hauling, the pulling of the fly line with the line hand, contributes a great deal to the speed of the line. To haul, the line hand grips the line near the butt of the rod, and pulls the line downward towards the feet. The longer and faster the haul, the more speed that is imparted to the line. When casting for distance, the haul usually ends with the arm fully extended to the level of the knees. The haul must be timed to coincide with the brisk component of the cast. To maximize line speed and distance, the line should be hauled on both the backcast and the forward cast, which is known as a “double haul”.

When casting for distance, the smooth integration of all these components into the casting motion should result in the fly line moving in a perfectly horizontal plane, with a tight loop, at the greatest possible speed. Practice sessions or drills should therefore focus on effecting these end results. Any breakdown of the casting motion will be readily apparent, with sagging of the line, opening of the loop, or loss of line speed.

When I practice, I begin with twenty-five to thirty feet of line outside my rod. I position myself in a somewhat open stance, and angle my rod at about forty-five degrees to the side. My head is turned to watch the line during both the forward and back casts. I focus on a balanced casting motion, and keeping the line moving in a perfectly horizontal plane. When satisfied with this short cast, I let a little more line out, and continue to do so until I’m casting about seventy-five feet of line. It takes me about five minutes of continuous casting to reach that point. At first, I had trouble doing this, as I would develop muscle fatigue in my arm. So, this is an exercise done to assure integration of all the casting components, and to strengthen the casting muscles.

To work on casting a tight loop, no larger than three to four feet in diameter, I cast through a plastic loop. Its fun, and a bit of a break from the first exercise. Here is a picture of Cooper, my casting coach, casting a critical eye on the exercise.

I then finish my distance exercises with hauling. I again use only a moderate length of line, thirty-five to forty-five feet, and I try to maximize line speed by applying long, fast hauls. I do this nonstop for about five minutes. Again, when I first started to do this, it was challenging, leading to arm fatigue.

Hopefully I have persuaded you that it is worth your while to develop the casting skills necessary to cast a good distance, and have provided you with an understanding of the components of the cast needed to do so. You will never regret becoming a more skillful fly caster!

“The Ramblings of an Aging Angler”, chapter 3, “Casting Basics”.

One thought on “Fly Casting for Distance”