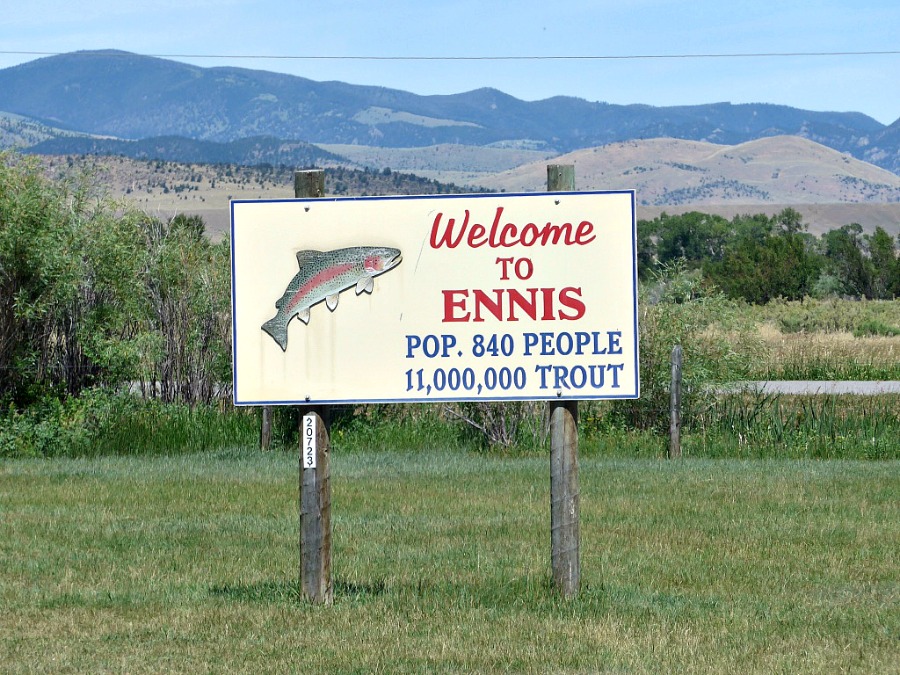 Montana and fly fishing are almost synonymous. Ever since Norman MacLean’s novella, “A River Runs Through It“, became a movie in 1992, fly fishing has become increasingly popular. As a result, Montana has become a major destination for fly fishers. There are so many good streams and destinations in Montana to consider, that choosing one can become a challenge of good choices. But for me, Ennis is the epicenter, one of the world’s incomparable fly fishing destinations.

Ennis is perched on the Madison River in Southwest Montana, and is a part of the “Golden Triangle” of fly fishing. In addition to SW Montana, the “Triangle” consists of Eastern Idaho and NW Wyoming, encompassing Yellowstone National Park. The world famous Madison River begins in the park, and flows 183 miles before joining the Jefferson and Gallatin rivers to form the Missouri River. It offers many miles of easily accessed water. While all but the portion in the park can be drift-boated, the park portion and two large sections downstream are restricted to wade fishing. Rainbow and brown trout are the predominant fish lurking in its waters, but cutthroat trout and mountain whitefish can be caught as well.

Ennis is a small cowboy town, which swells in the summer with fly fishing enthusiasts. Its inhabitants, local ranchers, cowboys, outfitters, guides and western artists, make for an interesting mix. They are very welcoming and friendly to visitors. The town includes a half dozen motels, numerous B&B’s, two nearby fly fishing lodges, RV parks and campgrounds, an eclectic assortment of excellent restaurants, and four flyshops. Further information regarding activities like the 4th of July rodeo, the western art festival, and the fall fly fishing festival can be found at the Chamber of Commerce website http://www.ennischamber.com/.

The Madison River valley is framed by mountains. The Gravelly and Tobacco Root mountains lie to the west, and the majestic, snow-capped Madison mountain range lies to the east, where the Sphinx dominates the skyline.

In the summer, thunderstorms can be watched, as they roll northward through the valley several times a week.

Fortunately, the storms are short-lived, and are punctuated with bursts of sunshine, which often create rainbows. In many ways, it is a valley of rainbows.

Montana’s blue ribbon trout streams boast ~ 5,000 trout per mile. This is due to Montana’s management of its streams. After studying the effect of stocking upon trout populations, Montana banned the  stocking of all streams that can support a wild trout population in 1974. It was the first state to do so, and it resulted in a tripling of trout populations, which are wild and strong. There is also a strong catch-and-release fishing ethic.

The Madison River offers good hatches and fishing year ’round. In winter, there are plentiful midges, offering surface action, while subsurface fishing with midge and stone fly nymphs is always rewarding. The famous salmon fly hatch happens around the fourth of July, and heralds the onset of spring/summer fishing. Other summer hatches include PMD’s, yellow Sally’s, caddis and tricos. The trico hatches continue into early fall, when they are supplanted by blue winged olives. Hoppers and other terrestrials are plentiful during the mid and late summer, and streamers can always be fished.

On the way into town, one is greeted with the sign below. Is this a fly fishers’ paradise, or what?

In addition to the fishing, one never knows what wildlife will be encountered when spending a day on the Madison River. Here are a few pictures of my recent encounters-

If one were to tire of the Madison, the Ruby River is forty-five minutes to the west, while the Beaverhead River, Poindexter Slough and the Big Hole River are but an additional forty -five minutes further west. To the North are the Jefferson and Gallatin Rivers, both reachable within an hour. Southeast is Yellowstone National Park, with the Madison, Firehole and Gibbon Rivers all reachable within an hour to an hour and a half. Lastly, Henry’s Fork is ninety minutes to the South. In addition to the named rivers, there are many smaller, less well known streams as well as numerous trout-filled lakes. In short, there are enough trout waters surrounding Ennis to provide a lifetime of fly fishing adventure.

I have had the pleasure of fishing many streams in America and around the world as well. When Zach Mathews, the Itinerant Angler, interviewed me for a podcast titled “World Explorer with Dr. Al Simpson”, which can be listened to at  http://www.itinerantangler.com/blog/podcasts/category/podcasts/,  the last question he asked me was, “If you had but one more day to fish, where would it be?”  My answer was, Ennis, Montana.