‘Tis the start of a new year! I couldn’t think of a more apropos topic than “getting started” into the sport of fly fishing. I intend the discussion to be helpful both for those interested in starting, and those helping others get started.

There are five minimal essentials needed to place an artificial fly on the water and catch a fish. One needs a rod, reel, line, leader, and a fly. For those transitioning from bait-fishing, note that you will now be fishing with a “rod”, not a “pole”! Just kidding; so let’s begin with how to choose a rod.

Rods may be made of fiberglass, bamboo or graphite. But today, I would estimate that greater than 95% of anglers fish with a graphite rod. Therefore, my comments will be mostly applicable to graphite rods. When selecting a rod, three important elements to consider include its weight, length, and action or degree of flex.

Fly rods are built to be fished with lines of a similar “weight”. The weight designation of a rod is thus the weight of the line, not the rod. Today, most rods actually weigh only 2-3 ounces. But the line weight, and hence the designated rod weight, ranges from 1-14. A 5-weight rod is therefore generally best fished with a 5-weight line.

Fly rods come in a variety of lengths. The most commonly fished rod for trout fishing is 9 feet in length. But if one is creeping through brush along small streams, a shorter rod is easier to handle. Conversely, if one is fishing large streams with open banks, longer rods have advantages. Thus the type of fishing one prefers is the primary determinant of a rod’s length. For those just beginning to fly fish, uncertain of their preferences, an 8′ 6″ or 9′ rod is a good length.

Fly rod action is the last element to consider. Manufacturers use a variety of terms when describing their rods’ action, or degree of flex. Rods that flex most easily are generally described as “full flex”, or “slow action” rods. They are designed for fishing small streams, and load or flex with only a short length of line outside the rod-tip. The stiffest rods are generally described as “tip flex”, or “fast action” rods. They are designed for fishing larger streams where longer casts are often needed. Rods between these two actions are described as “mid flex”, or “medium fast”. The latter are probably the best action for those just beginning to learn how to cast.

Putting all that together, a rod 8′ 6″ or 9′ feet in length, with a medium-fast action, is the rod best suited for most beginner fly fishers.

So how much should a good starter rod cost? Cost ranges from less than $100, to more than a $1000. While manufacturers tout their high-end products, costing 800-900 dollars, most realize there is a large market for less expensive rods. Hence, there are many good rods available in the 200-300 dollar range, complete with a 25 year or life-of-the-owner warranty. A “bargain” rod costing less than that generally does not cast as well. In addition, they usually lack a warranty in the event they get broken. Thus, if budget allows, anticipate spending 200-300 dollars.

When selecting a reel, factors to consider include how it is made, its line capacity, spool size, weight, and drag system.

Reels are either machined from a block of aluminum, or cast in a mold. Machined reels have crisp lines, weigh less than cast reels, and have greater strength. Cast reels have a more solid appearance, but are actually weaker. If an angler falls and strikes the reel on a hard surface, the cast reel is more likely to break. They also weigh more.

Reels come in different sizes to accommodate the lines they hold. Heavy lines have larger diameters than lighter lines. Hence, they require more space on a reel. Most reels will comfortably hold lines of 2-3 different weights. The line sizes a reel is designed for is indicated on its package.

In addition to line capacity, reels offer different arbor sizes. Think of the arbor as the diameter of the reel’s spool, which holds the line. 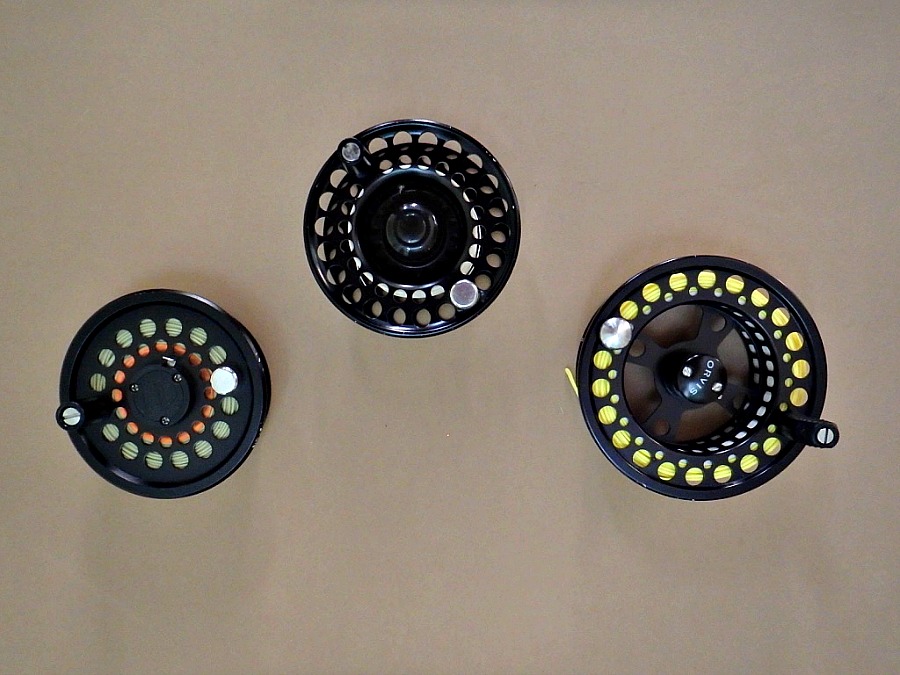 The larger the arbor, the more fly line that is retrieved with each turn of the spool. Thus, large arbor reels take up line more quickly than small arbor reels. This is important only if fishing large streams requiring long casts. There, it is helpful to have a large arbor reel if a fish is hooked 50-60 feet away. This is obviously not an issue if fishing a small stream, hooking fish 10-15 feet away.

The weight of a reel comes into play as we try to balance our rod and reel. This is tested by simply letting the rod rest on a finger, and sliding the finger until the rod/reel is balancing itself. Ideally, this is just ahead of the cork handle. A properly balanced rod/reel casts more easily, and is less fatiguing to cast and hold.

The last factor to consider is its drag system. Drag systems allow the angler to adjust the resistance to line pulled off the reel by a fleeing fish. This is very important when fishing a large fish with a light leader that will break at 2-3 pounds of pressure. The drag is adjusted to allow line to be released if the pull of the fish approaches the strength limit of the leader.  If fishing small streams with small fish, a drag system will never be used; the reel simply holds the line.

Reels vary greatly in their cost, from less than $100, to more than $500. This is driven mostly by whether they are machined or cast, and by the quality of their drag systems. For beginners, I think this is an area to save money. There are many reels that cost less than $100. I would focus on getting a reel that balances the rod, and is sized for the line weight. If fishing large streams, get an adjustable drag system. But if fishing small streams, one can avoid the added cost of a good drag system.

There are a dizzying variety of fly lines. But for the beginner, a floating line is the place to begin. Unless one is dedicated to fishing small streams only, a weight-forward, all-purpose tapered line is ideal.  For the dedicated small stream angler, consider a double tapered line, which loads or flexes the rod more easily. See “Fly Line Basics” for further information r.e. lines.

Things to consider when selecting a leader include the material it is made of, its length, tip diameter, and strength.

Leaders may be made of either nylon or fluorocarbon. Nylon is a bit stronger at any given diameter, but fluorocarbon is less visible to fish. For trout fishing, i.e. fresh water fishing, I’m not sure either has a distinct advantage. But fluorocarbon leaders do cost about three times as much as nylon leaders. So make your own choice.

For small stream fishing, a 7 1/2 foot leader is all that is necessary. But on larger streams, especially those with wary fish, longer leaders help present a fly, and keep it farther away from the more visible fly line. Nine to twelve foot leaders generally suffice on larger streams.

Like fly lines, leaders are tapered. The butt, which is thickest, is attached to the fly line. The leader then gradually tapers to the tip, which is the smallest portion. The tip is the “action end”, and so the leader is labeled according to the diameter of the tip. Smaller flies present more naturally with smaller tip diameters. But smaller diameter leaders break with less pressure than those with larger diameters. Thus, it’s best to use the largest diameter tip that will present a fly naturally.

Smaller diameter leaders break with less pressure. The leader packet provides the breaking point in pounds of pressure. This information is important if fishing for larger fish with small flies. As a rule of thumb, use a leader size that presents the fly naturally. Then, adjust the reel’s drag system as discussed under “reels”, to prevent “break-offs”.

Fly fishing is all about imitating the natural foods that fish feed on. Our love affair with trout is due to the fact that they feed mostly on aquatic insects, often on the water’s surface. We design our artificial flies to imitate them. Fortunately, we don’t usually need to imitate them precisely. But the important attributes of our imitations include  their size, shape and color. Of these, size is the most important. If our imitations are larger than the naturals, trout usually ignore them. Our inclination is to err on the large size. So if faced with “refusals”, that is  the trout won’t take them, use a smaller fly.

“Dry flies” imitate aquatic insects that have “hatched” or “emerged” from their aquatic environment. The winged bugs mate and lay their eggs in a few hours or days, which completes their life cycle. Dry flies float on the water’s surface, similar to the just-emerged insect. 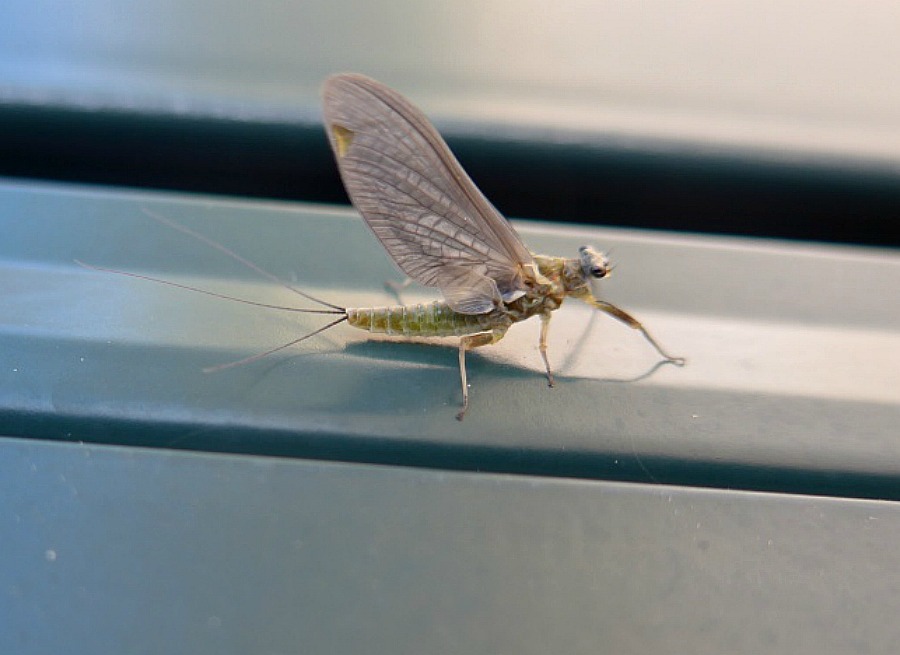 “Nymphs” imitate aquatic insects during the remainder of their lifecycle. The duration of the aquatic stage varies from months to years, but for most, it is one year. Thus nymphs are available as food all year long. Their imitations are fished under the water’s surface, where the nymphs live. 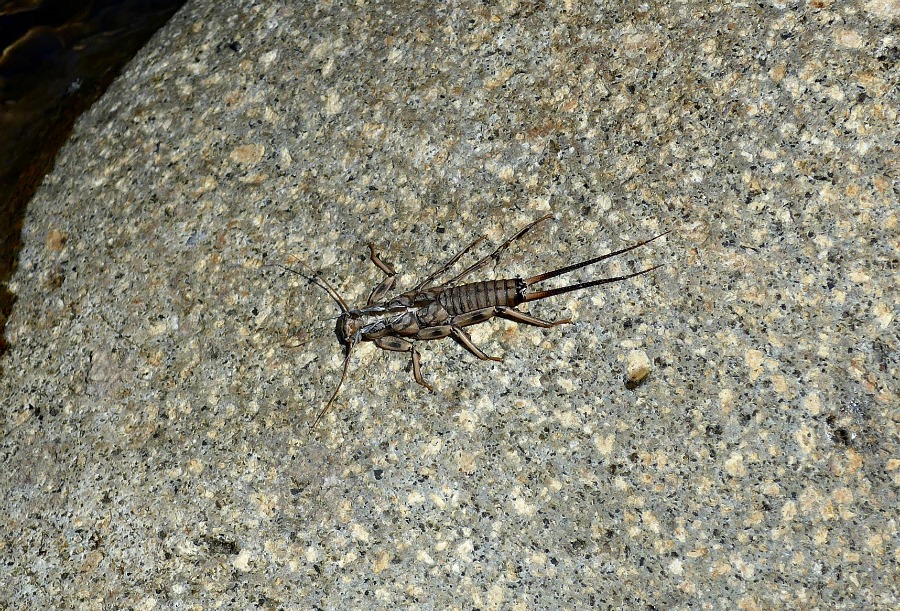 Most fly fishers love to fish a hatch. The trout come to the surface, where we target them with our dry flies. But most of the time, there is no hatch. At such times, we fish our nymphs.

See Ten Trout Flies Never To Be Without for more information about flies.

Now that you have the tools, it’s time to learn how to cast your fly rod. We older folk mostly had to teach ourselves. But today, there are many available resources that can shorten the learning curve. If available, a willing friend or mentor is a good place to start. Otherwise, most fly shops have guides and/or casting instructors. Orvis shops even offer beginning courses for free. As a last resort, one can still learn on their own, using some of the many instructional books and videos available.

When able to reliably make a cast of just twenty feet, it is time to hit the water and have some fun! I would suggest fishing a pond first. No additional equipment is necessary. Resident bluegill and bass usually come to a fly quite readily. Therefore, pond fishing provides the opportunity to learn how to cast, set the hook, play, and land a fish.

So ring in the New Year right, and take up a healthy, adventuresome sport- FLY FISHING. Tight lines!

In my next blog, I’ll cover some of the additional equipment that is helpful when beginning to fish streams.