Over the past several years, I have written separately about the four seasons of fly fishing for trout. Done in this manner, I think it’s difficult to convey the many changes that occur during the transition from one season to another. With this piece, I will focus on the transitions. It is during these periods that trout behaviors change as they react to their changing environment and food sources. While spring creeks, tailwaters and stillwaters undergo seasonal change, it is the freestone streams that are most affected. Thus my commentary regarding fly fishing season transitions applies most aptly to them.

Seasonal change is driven mostly by changes in the ambient temperature. This is of course a result of earth’s orbit about the sun, and its distance from the suns warmth. But seasonal change is not a smooth transition. It is interrupted by daily and weekly fluctuations in the weather. Sun, clouds and precipitation change ambient and water temperatures, and thereby, bug and trout behavior. Thus astute fly fishers factor in seasonal trends, recent weather, and current conditions as they prepare for a day of fishing. 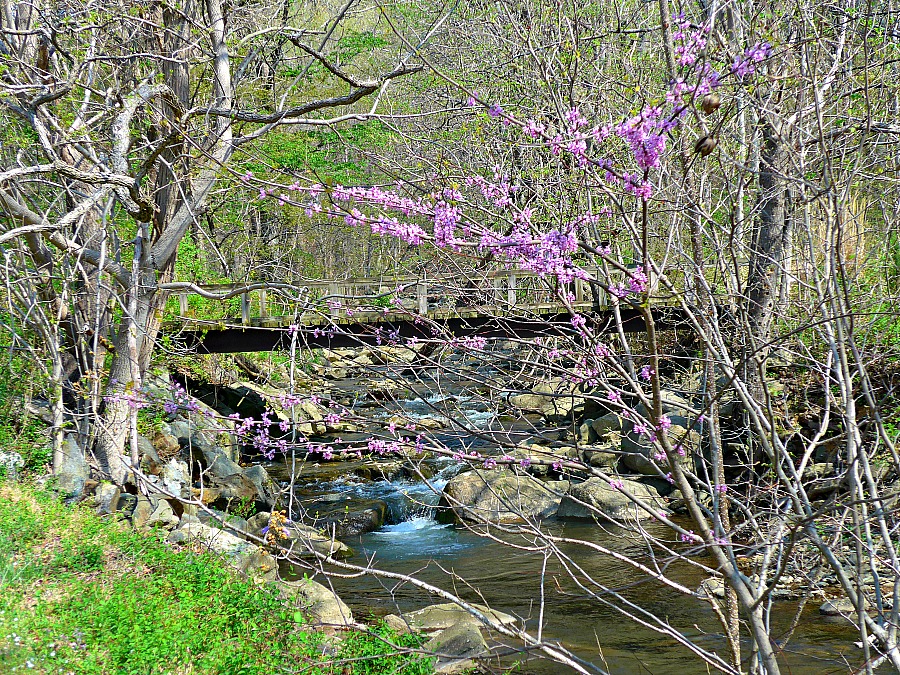 If fly fishers had only one season in which to fish for trout, I think most would choose spring. At this time, trout emerge from their winter quarters and begin to disperse themselves throughout their streams. Over the winter, they have depleted their fat-stores, and are lean and hungry. For trout, spring is all about food! This probably has more to do with their apparent gullibility in spring than the reduced fishing pressure they experienced over the winter. Besides, I personally have issues with awarding PhD’s in artificial flies to trout, but who knows for certain?

Spring transition begins with melting snow and showers, generally raising streams to their highest levels of the year. The high flows often carry great quantities of silt, reducing visibility for both trout and fly fishers. During this period, most streams are nearly unfishable. But after a week or two, water levels drop, the waters clear, and stream temperatures begin to rise. After a long winter, for both trout and fly fishers, the game begins!

As streams clear and begin to warm, trout leave their deep, winter holes. They seek and compete for prime lies. These lies provide food, cover from predators, a break from the current, and comfort.  Trout are cold blooded and most comfortable when the water temperature is between fifty and sixty-five degrees. In early spring, it usually takes two-three hours of sunlight to warm the water into this comfort zone. Thus, on sunny sections of streams, trout start to become more active about mid-morning. The warmed water also increases nymph activity, leading to the emergence of hatches.

As stream temperatures rise, the parade of spring hatches begins. The early, robust hatches offer some of the largest bugs of the year. In the East, it’s drakes and Hendricksons, while in the West it’s stoneflies, salmon flies and Mother’s Day caddis. Thus spring features hungry, starving trout and a massive food supply. Such a combination is a dry fly fisher’s nirvana, and offers the best dry fly fishing of the year! 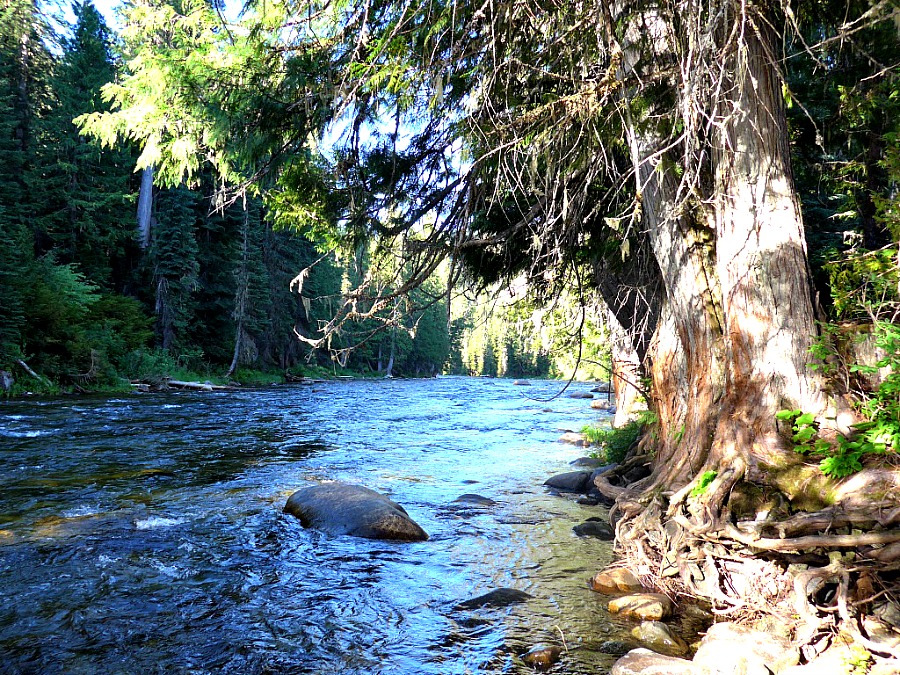 Over the next few months, stream temperatures continue to rise, ushering in summer. With the further rise in water temperature, many streams reach levels not well suited to trout. As water temperature rises, it is less capable of carrying dissolved oxygen. Temperatures above the mid-seventies can cause an increase in trout fatality. When stream temperatures approach these levels, trout leave their spring lies. They search for pockets of cooler water, with a good supply of oxygen. Thus they will now be found occupying deep riffles, runs with streambed springs, and spring-fed tributaries. Otherwise, they head for the shade, just like us!

During summer, trout move about in a stream more than at any other time of the year. Many of their comfortable holding lies offer very little food. Therefore, they must leave them in order to feed. They usually do this when the water temperature is lowest. This occurs during the night, and extends into early dawn. Trout are most active during this time. By mid-morning, the sun warms the water again, and the trout return to their cooler lies. Thus their summer behavior is just the opposite of spring. In spring they look for warmer water, and in summer they look for cooler water.

Summer weather is much more stable than spring’s. Most days are sunny and warm, punctuated by only an occasional storm. While the mayfly parade is over, most streams settle into a steady pattern of hatches. Two of the more productive hatches include early-morning tricos and late-evening caddis.

Daytime storms may trigger mid-day activity. This is due to cooling of the water and an  increase in oxygen levels. Both the trout and their aquatic food sources respond to these changes.

Summer also offers terrestrial insects, grasshoppers, beetles, crickets and ants. Fishing a “hopper-dropper”, dropping a nymph off a large, artificial terrestrial, is a good summer, daytime strategy. This rig is best fished along shaded stream edges, under overhanging riparian foliage. Use of a sidearm cast reduces the number of flies left dangling in the brush! 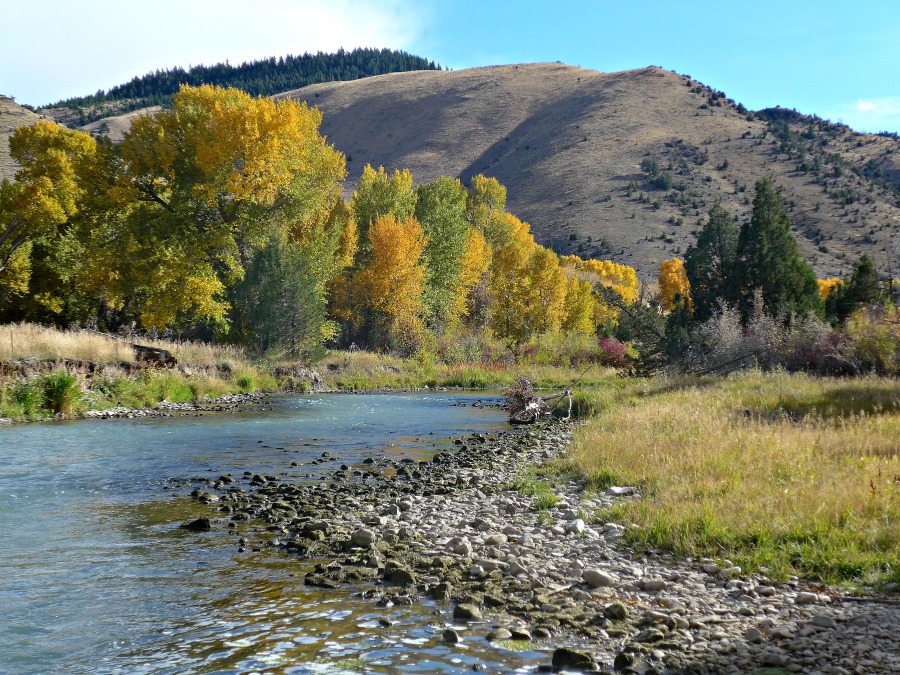 For several reasons, I think the fall transition is the most challenging season for trout fishing. It usually begins with streams at their lowest levels of the year. The water is crystal clear and the surface smooth, making trout spooky. But the cooling water carries more oxygen again. Thus trout’s major concern shifts from oxygen and comfort to cover from predators. Favored daytime holding lies include undercut banks, logjams, and deep pools. They venture out to feed only when they feel secure. This is during periods of low light and foul weather.

Fall is an example of the fine balance of nature. In contrast to spring, which is typified by hungry, aggressive trout and big-bug hatches, fall is typified by less active fish and scant hatches. The cooler water temperatures reduce trout metabolism and caloric needs. This coincides perfectly with the reduced supply of food. But for the fly fisher, this unfortunately means that on any given day, there are fewer actively feeding fish.

The reliable spring and summer hatches have finished for the year. On sunny days, a few, thin trico and callibaetis hatches may appear. But they don’t often generate much enthusiasm among the trout. Cloudy days and foul weather sometimes trigger an olive hatch. Trout eagerly respond to  this hatch. Although olives hatch in foul weather, they are not immune to its adverse effects. Thus cripples outnumber duns. Emerger and cripple patterns, fished in the film, will catch more fish than dun patterns.

In addition to a paucity of hatches, nymphs are at the beginning of their year-long growth cycle. Thus they are much smaller than those present in the spring and summer. Due to the reduced supply of aquatic bugs, trout turn increasingly to minnows, including their own fry. Hence fall is synonymous with streamer fishing. Even better is a streamer with a small nymph, trailed 12-18 inches behind.

Unstable weather also contributes to the fall challenge. Gone are the days of steady summer sun.  Cloudy days, with cool rains or even short-lived snow storms, often interrupt the sunny days. All this weather-confusion makes it extremely difficult to predict bug and trout behavior.

Despite the many challenges of fall, it offers some of the best opportunities to catch big, summer-fed, trout. Next to spring, I think it is the most favored season of the year for “seasoned” fly fishers! 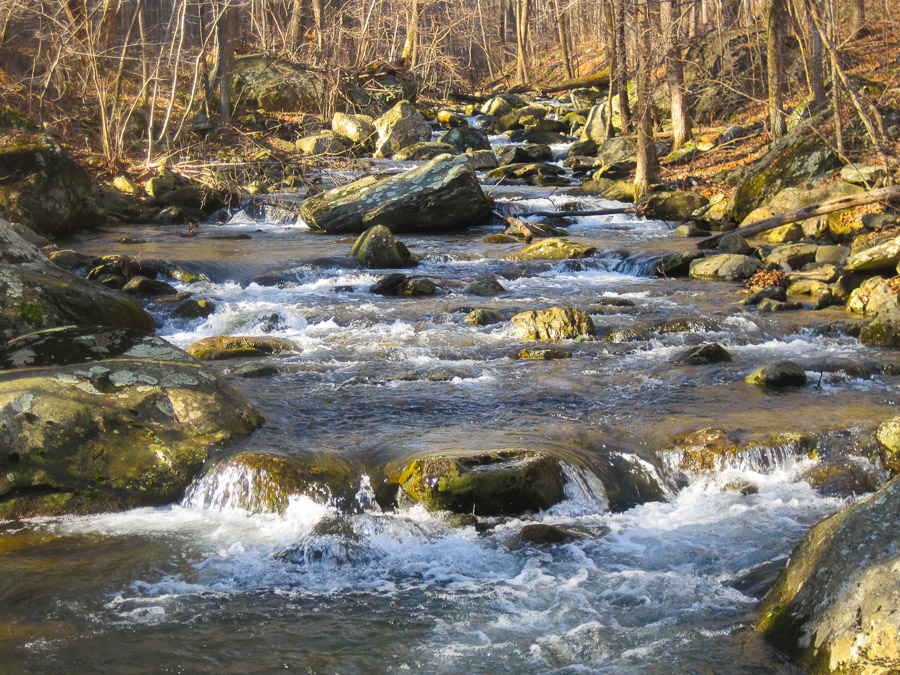 The last season transition is from fall to winter. As streams continue to cool, trout metabolism slows further. They now search for warm water, with cover from predators and comfort from the current. Therefore, favored winter lies include deep pools or holes, and runs with streambed springs, spewing fifty-four degree water. In contrast to other times of the year, trout are content to share such waters. Thus, if you find one trout, you will usually find a pod.

While trout feed less aggressively in winter, they are still looking for easy-to-grab food. In quiet waters with silty bottoms, sunny days trigger mid-morning and evening midge hatches. Smaller fish will come to the surface to feed on emergers and duns. But the larger fish typically remain deep in the water column. Thus a tandem of a large, weighted nymph with a trailing midge nymph, fished deep and slow, is a good winter strategy. Because trout won’t move far to grab a bite, the water needs to be fished more thoroughly than at other times of the year.

Each of the four seasons passes through a period of transition. These seasonal transitions lead to significant changes in streams, and alter trout behavior. Thus, fly fishing season transitions productively requires an understanding of these changes. A good understanding helps one locate trout and select the best strategy to fish them. With a thoughtful, informed strategy, more fish will wind up in the net, and put a bigger smile on a fly fisher’s face!