I just returned from a week fly fishing in the Bob Marshall Wilderness, a long sought adventure. “The Bob”, as it is affectionately known by Montanans, is located in NW Montana. It straddles the continental divide for 60 miles, encompassing over one million acres, and is accessible only by foot or horseback. The nearest airports are in Kalispell, 90 minutes away, and Missoula, 2 hours away.

The National Forest Service “maintains” a series of trails into the wilderness area. For anglers, the main draw is the South Fork Flathead River, 25-29 miles from the trailheads. Outfitters offer a variety of options. They will pack in pontoon boats, tents and food with full service  including guides, or pack in/pack out anglers with their supplies and gear. The float is 35 miles, and done over 5 days.

But Reid and I much prefer to walk-and-wade-fish, and therefore selected a third option, a full service trip on horseback with basecamp a stone’s throw from the river. We chose the 406 Wilderness Outfitters, run by third generation outfitter, Mark Cheff.

The twenty-nine mile journey in was trying, but beautiful. The horses were amazing. Mark’s family crosses Tennessee walkers, thoroughbreds, and draft horses, resulting in strong, smooth, responsive and sure footed mountain horses. They are allowed to mature and trained for 10-12 years before ridden by clients.

We departed the Holbrook Trailhead at Holland Lake at 8 am. The trail goes through two mountain passes, climbing about 2500 vertical feet. It is never more than 2-3 feet wide, and is strewn with deadfalls, large boulders, and loose gravel. Sometimes it traverses steep hillsides, and numerous streams are crossed along the way as well. “If in doubt, just trust your horse” was the word of the day. Truer words were never spoken! 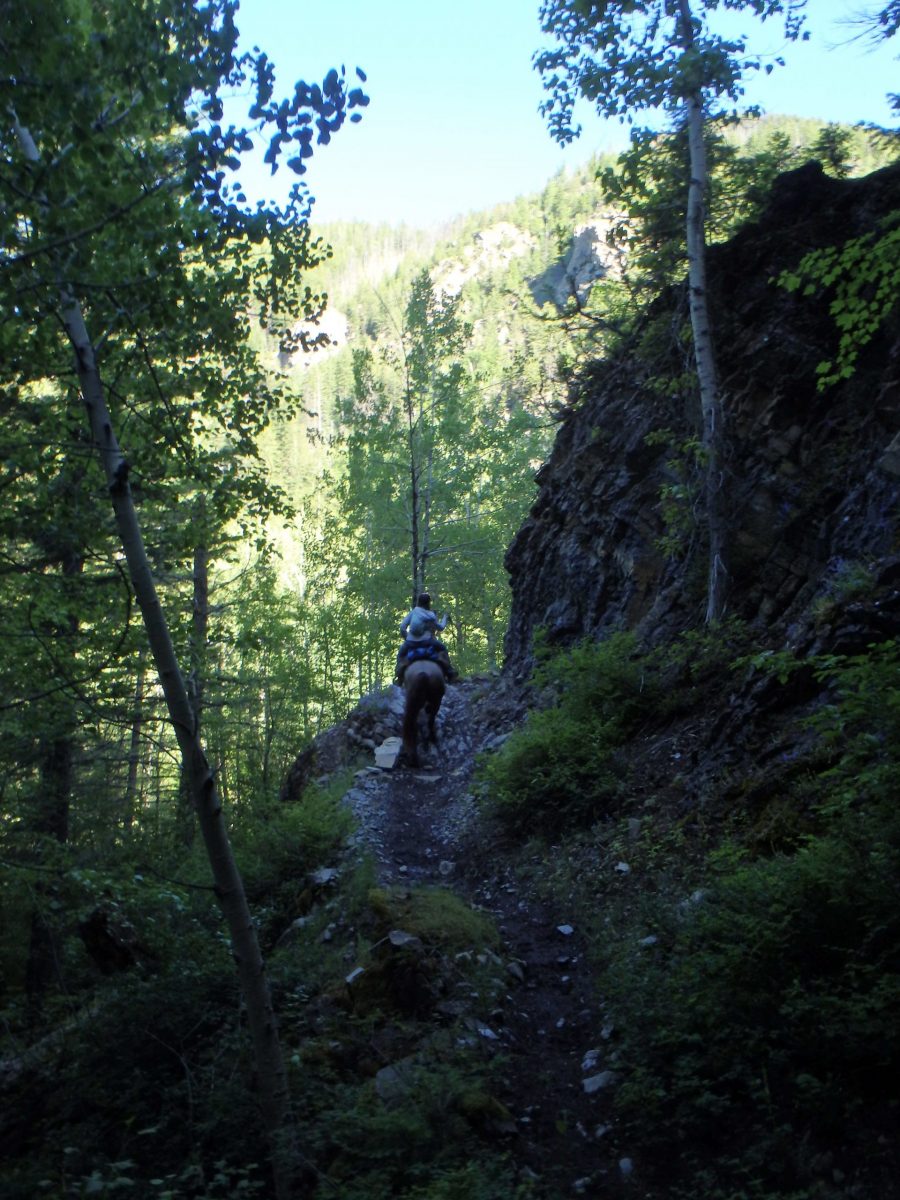 a portion of steep hillside trail

Base camp consisted of several tents for clients and staff, with a cook and dining tent. A solar shower tent was also available. 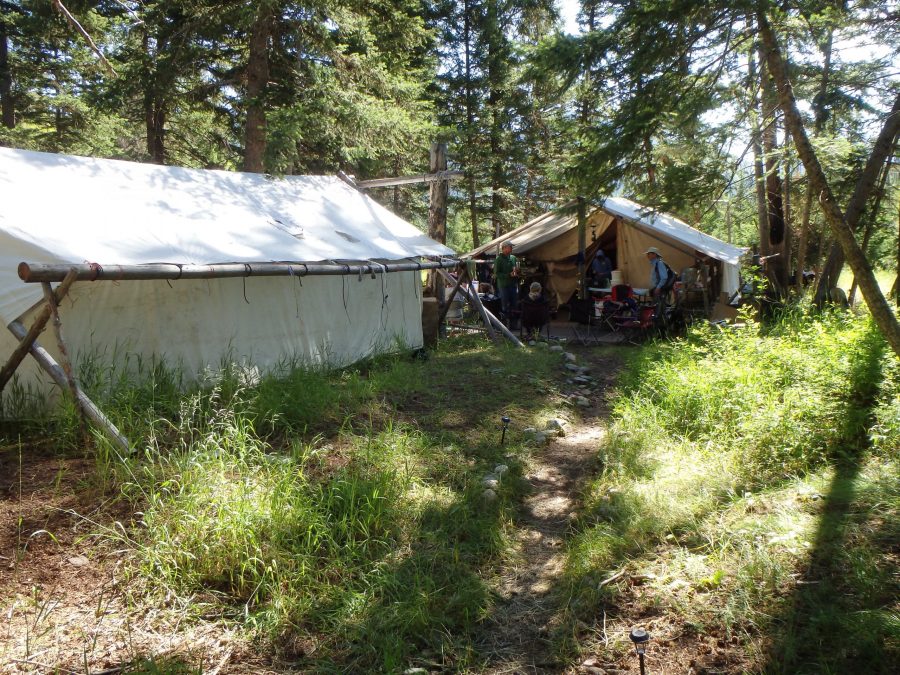 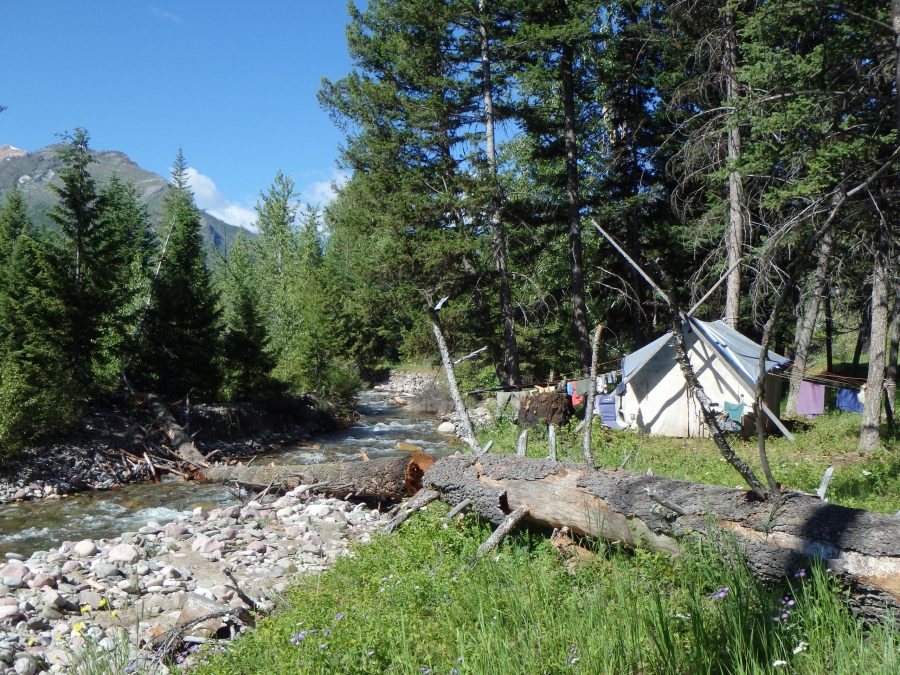 home for a week

We rode the horses to fishing destinations in the morning, and arranged for a pick-up in the evening. We regarded them as our equestrian taxi service! With the extended reach that the horses provided, we fished all day for six days, and never had to fish a section of stream twice. 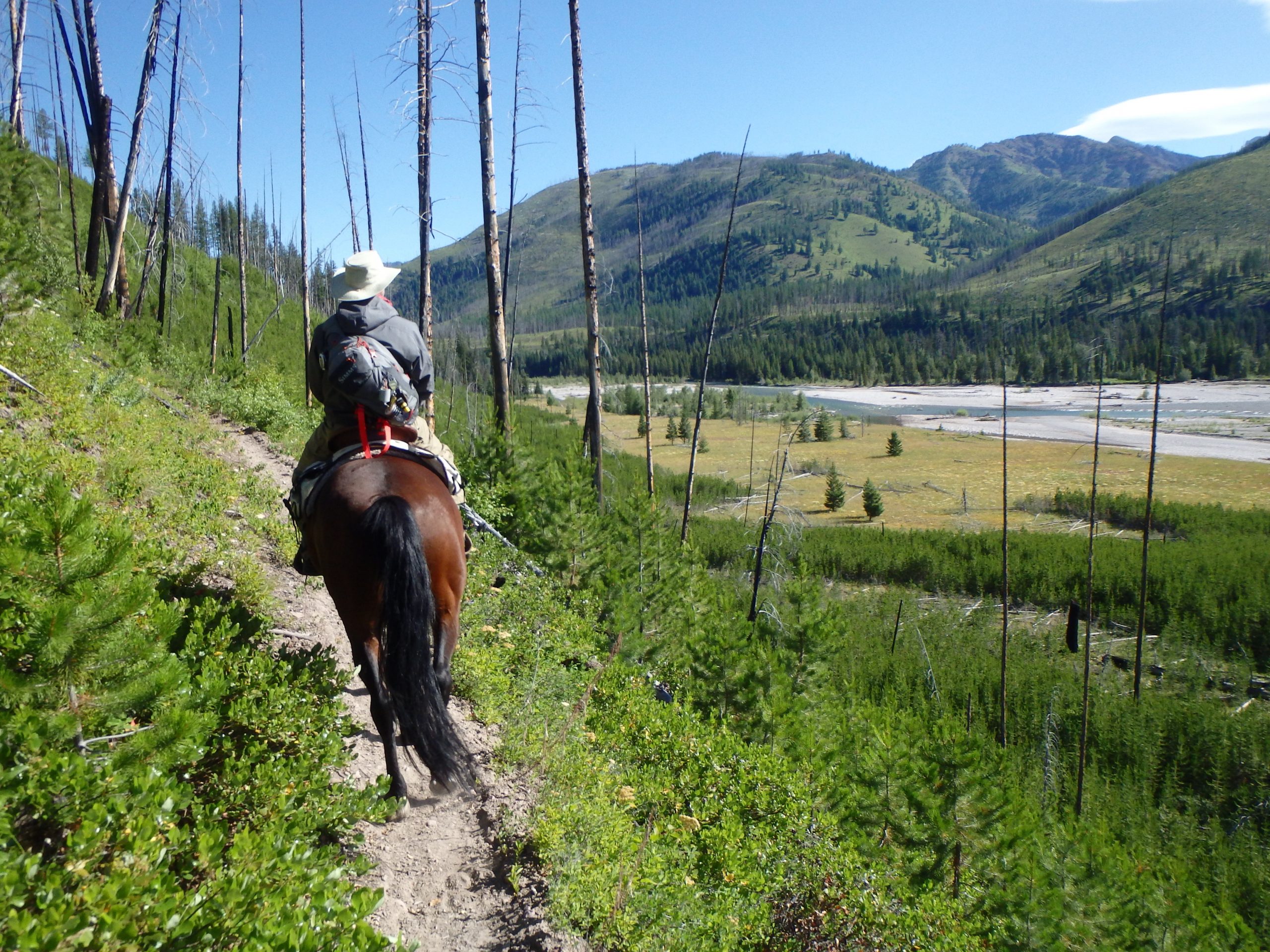 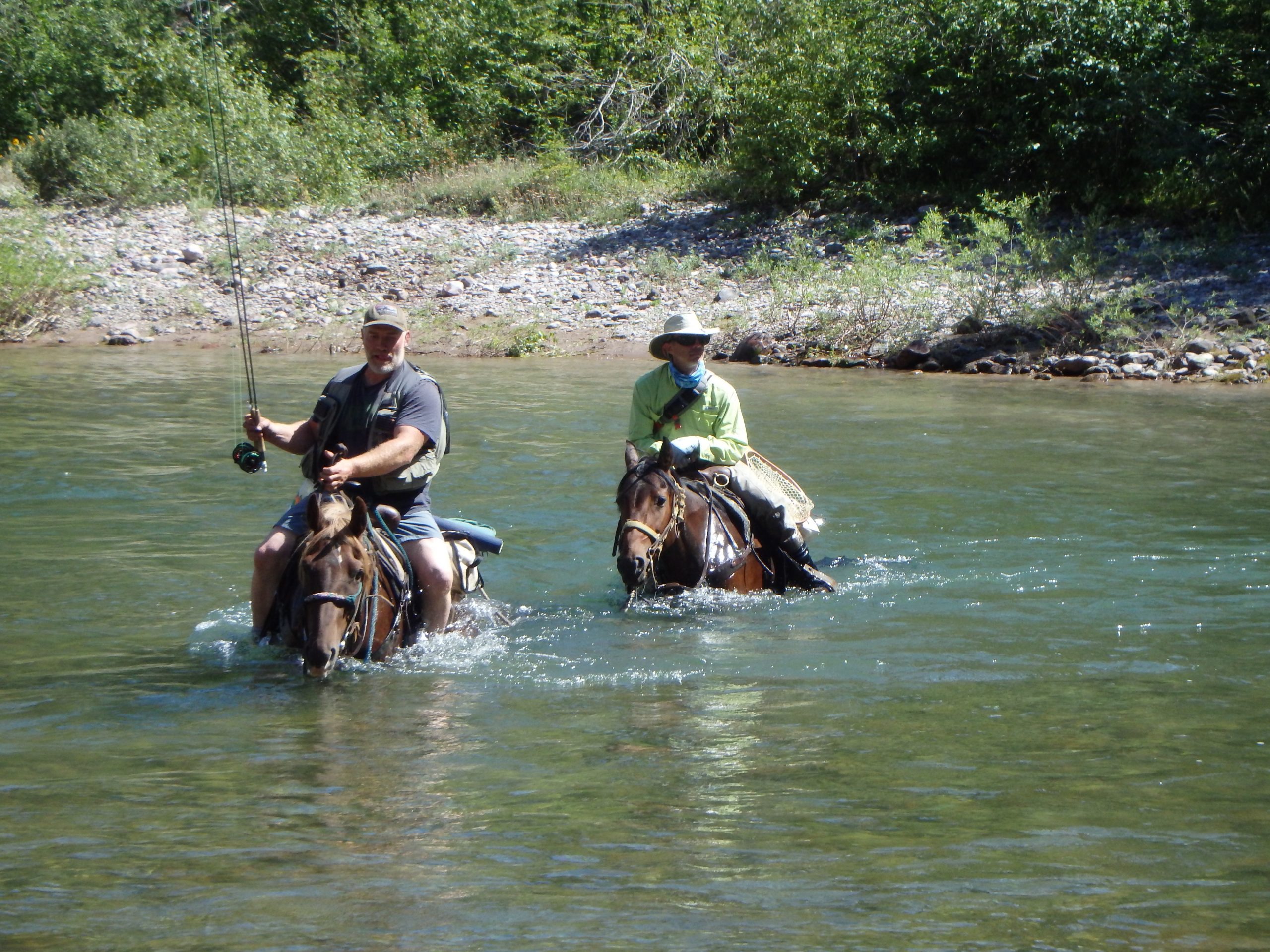 Too deep to wade across? Not a problem!

A typical day began with a hearty breakfast, with eggs, sausage, bacon, pancakes and/or granola, and of course, piping hot coffee. We packed lunches to carry along for daytime activities. After a long day, we returned to camp to find appetizers and wine waiting for us. Mark and Claire prepared healthy, homestyle meals, with fresh salads, vegetables, and fruit. Tasty entrees included pot roast, barbecued chicken, baked salmon, spaghetti, and “buffalo under a blanket”. For that last one, think shepherds pie; it is Montana after all! And always a dessert- fresh baked berry pies, fruit cobblers, etc. No one lost any weight!

The Flathead Watershed is home to the largest population of westslope cutthroat trout in the country. It also holds some bull trout, which can be targeted. We primarily fished for the ‘cutties. Although they have a reputation for taking any big, bushy attractor fly, we found that not to be very productive. Yes, a few fish were caught with attractors like stimulators, humpies or coachmen, but we caught on average 30-40 fish daily using other strategies.

The South Fork has a fairly good gradient, and its tributaries have even steeper gradients. The water is crystal clear, with good rock structure. Fishing the faster water with a Wooly Bugger/Copper John tandem put lots of fish into the net. 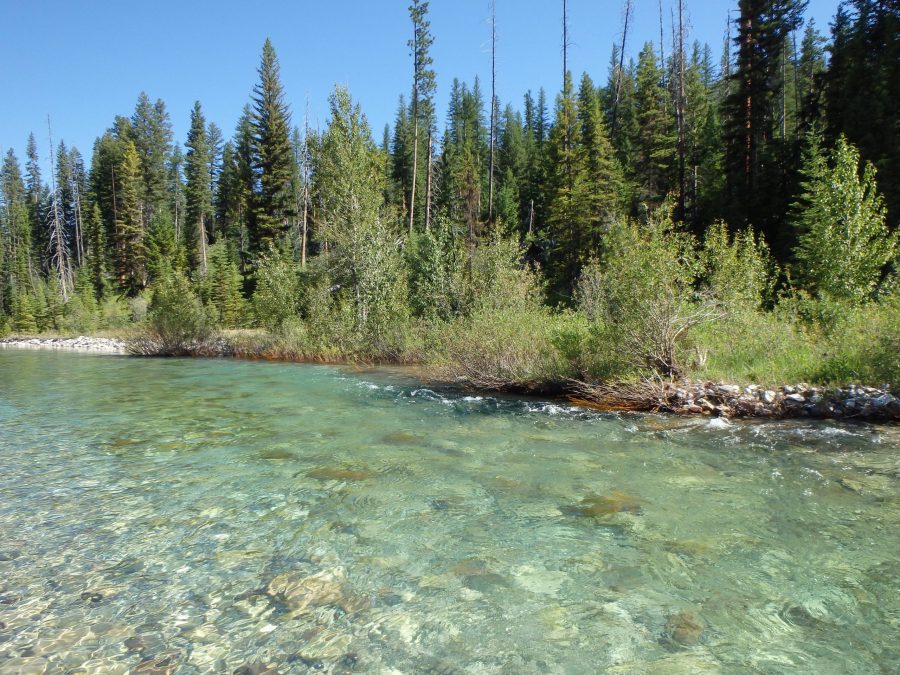 But cutthroat trout prefer softer water, which we found mostly on large bends and side channels. 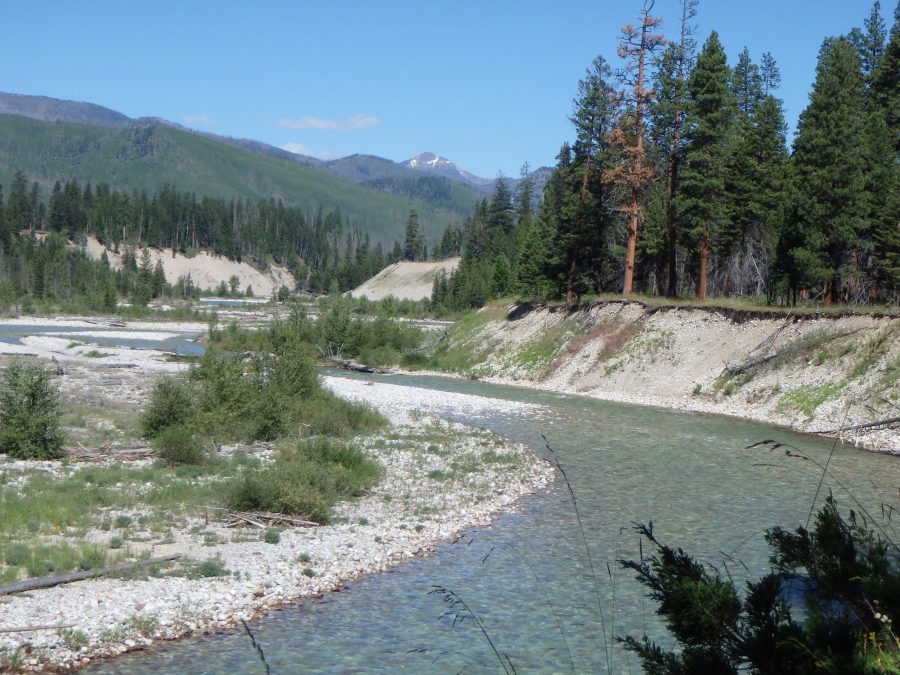 Hatches were scant, and we rarely saw fish rising. Despite this, they were looking up, and eagerly took Klinkhammers, tied with a gray abdomen and peacock thorax.

The only terrestrials we saw in significant numbers were red ants. To our delight, the trout smashed our cinammon ant patterns, whether floating or drowned.

The fish were plump and healthy, averaging 14-15 inches. A few approached 20 inches. We did not catch any bull trout, but we rarely fished streamers. 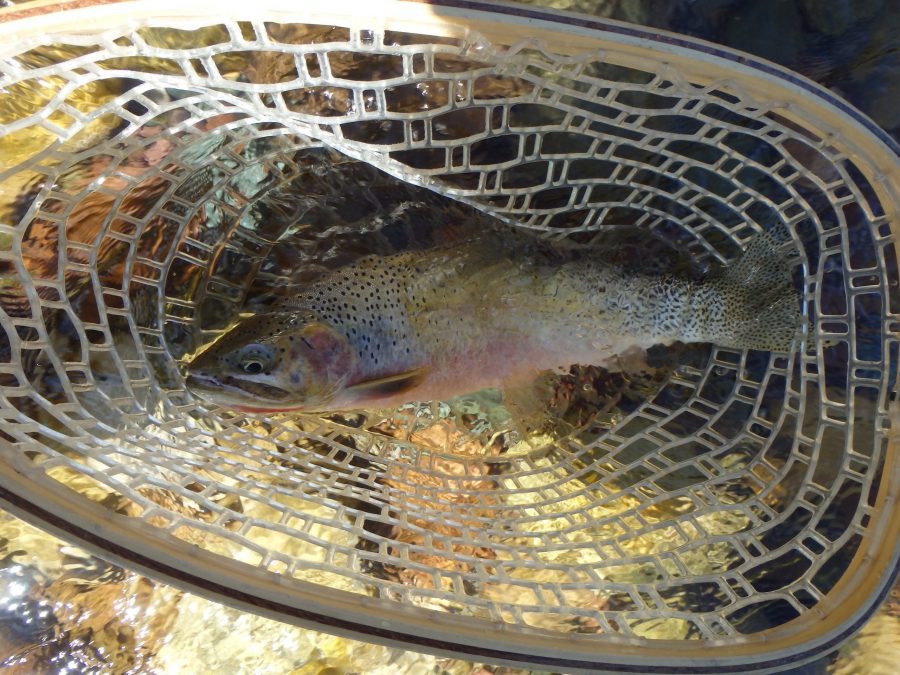 It was hard not to get distracted by the scenery. The adjacent meadows were filled with wildflowers in full bloom. 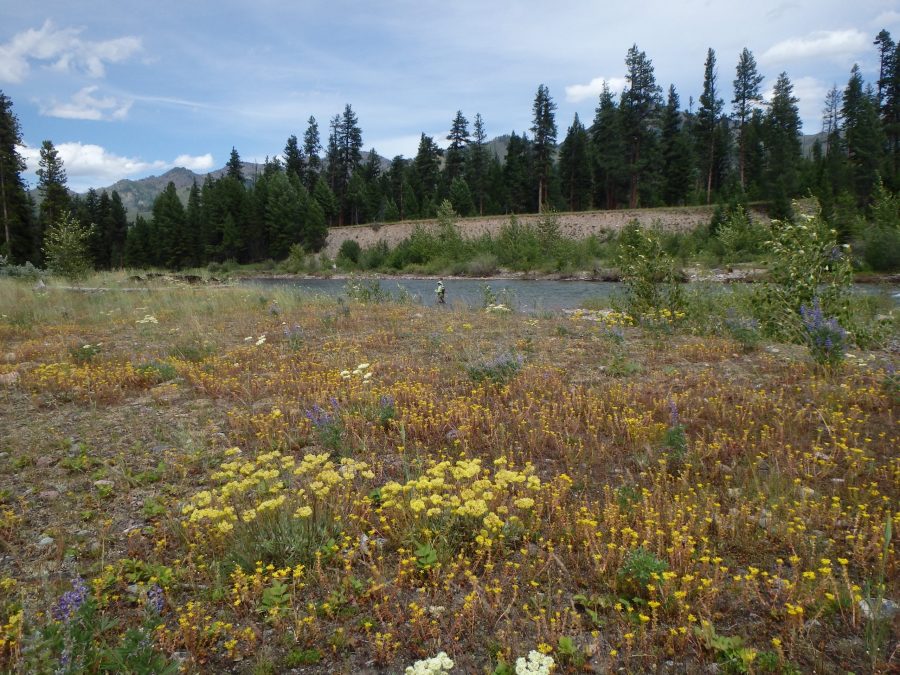 wild flowers along the South Fork Flathead river; even Reid looked up!

The Bob was everything we hoped it would be. Mark and the crew facilitated our fishing, and the fish made us feel like accomplished anglers! After 6 days of such rewarding fishing, the trip out proved easier than the trip in, and we left with many wonderful memories. 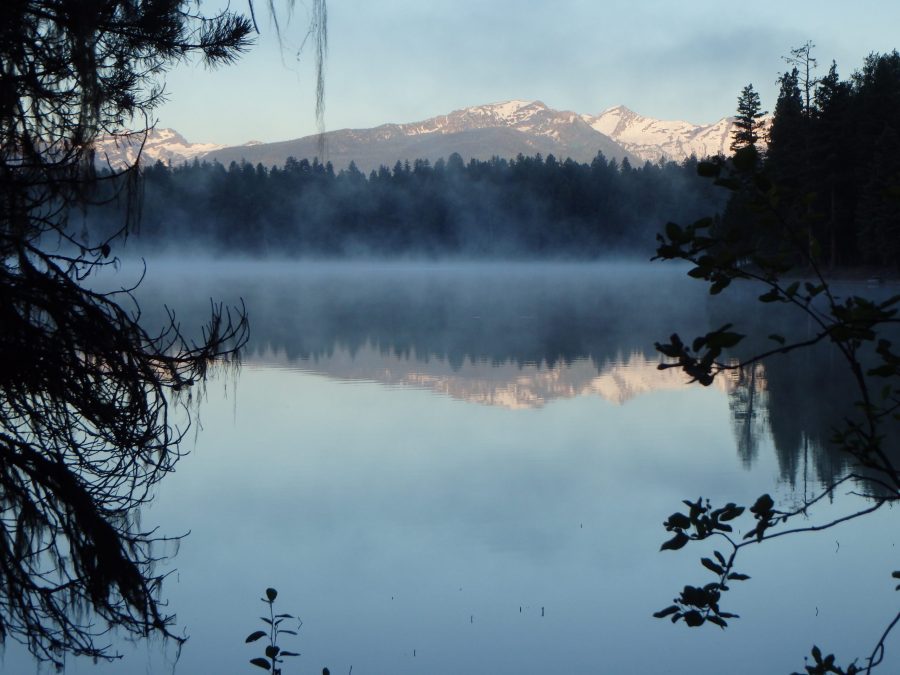 This summer, fishing buddy Reid and I planned a camping trip to include south central and southeast Idaho. But temperatures in the mid-nineties and forest fires in the central portion of the state led to a change of plans. We confined our trip to fly fishing southeast Idaho. The major fishery there is the Henry’s Fork […]