Whenever I’m scouting a new trout stream, one of the types of water I look for is the riffle. Why? Well, to paraphrase the famous bank robber Willie Sutton, I want to fish riffles “because that’s where the fish are”! In this article, “Fly Fishing the Riffle”, I will describe the features of a riffle, its attraction to trout, when and how to fish it, and the flies that I find to be most successful.

Riffles are among those sections of water where the stream is more shallow. The streambed is comprised of rocks large enough to disturb the flow of water. This leads to an easily recognized, choppy surface, as seen  in the picture below. 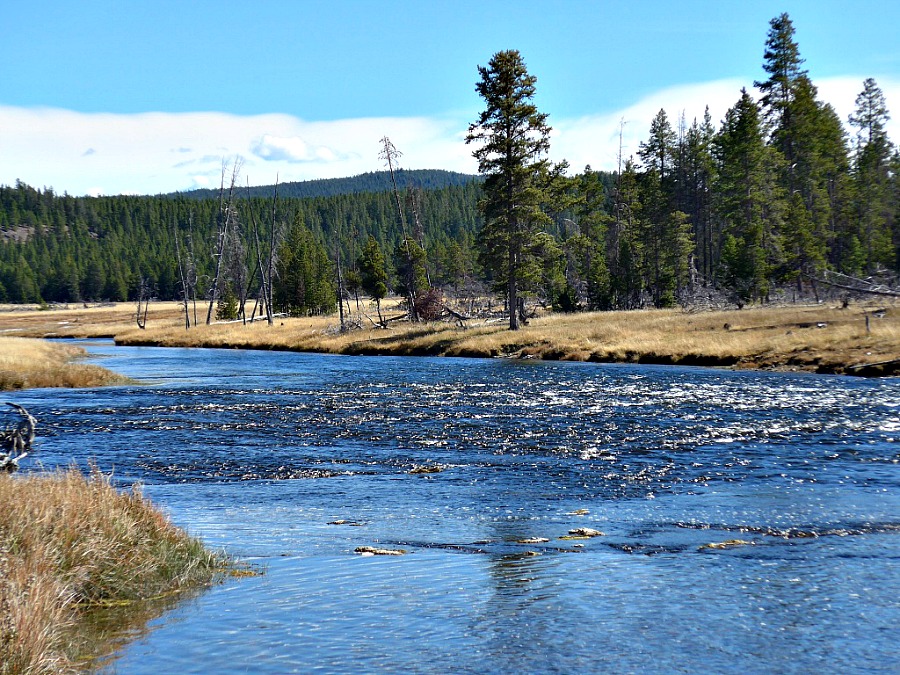 a riffle in the Firehole River, Yellowstone National Park

Riffles provides three things that trout need. The first is oxygen. The waves or chop entrap air in the water’s surface. This trapped air mixes in the water column, providing an oxygen-rich environment. This is particularly important in late summer and fall, when water levels are lower, stream flows reduced, and oxygen levels low in many sections of the stream. Therefore, fish will often congregate in riffles at this time of the year.

The second thing is the broken surface, which provides cover from overhead predators such as osprey and herons, which have difficulty seeing through the chop. Smaller fish feel secure in a riffle under almost all circumstances. But larger fish, those measuring in the mid-teens or greater, will usually be there only at times of low light, first thing in the morning and at dusk, unless there are some deep holes or pockets to provide added cover.

The third element that riffles provide for trout is an abundance of food. The shallow water allows sunlight to penetrate to the rocky bottom. This promotes the growth of micro and macro algae, and plants.  The abundant vegetative foodstuffs and freshly oxygenated water lead most aquatic insects to lay their eggs in riffles. After hatching, some nymphs and larvae will disperse to other sections of the stream by riding in the drift, but a heavy population will always remain in the riffle. In addition to these favored trout foods, daphnia, freshwater shrimp and minnows will also be present. Thus riffles offer a rich, feeding lie throughout the year.

In addition to the characteristics of the riffle described above, riffles usually carve out a deep run immediately downstream of them. It is here that the big fish spend most of their time. They feel more secure in the deeper water. Food will flow from the riffle into the run, carried by narrow currents, often marked by a line of bubbles.

Below is a picture of a riffle, which flows into a nice run along the grassy bank. 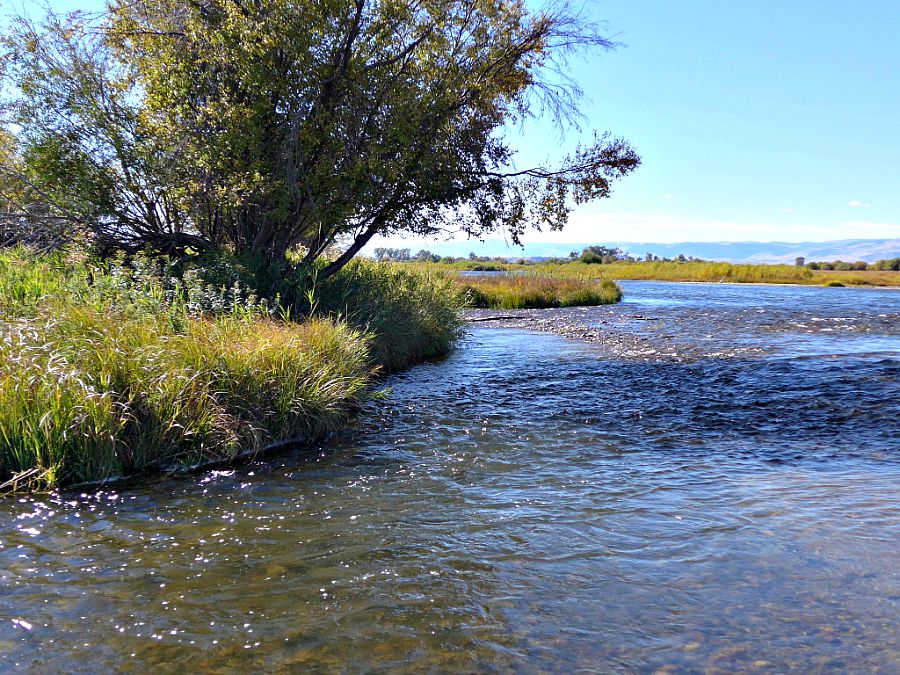 a riffle and run

When fishing a riffle, I try to present my flies as naturally as possible. I think this can be most easily accomplished when casting from a position to the side of the riffle. I like to cast my fly just upstream of the riffle, which allows the fly to gently enter the riffle. By raising the rod to lift excess line off the water when the fly is upstream of me, and then lowering it as the fly passes downstream of me,  a long drift can be presented to lurking trout. In addition, these manuevers will maintain a tight connection to the fly throughout the drift. This is necessary to enable the detection of even subtle takes of the fly.

Fishing from either upstream or downstream of a riffle is certainly possible. However, it is more difficult to effectively cover the water, present the fly naturally, and keep a tight connection to the fly. From upstream, the challenge is to keep the fly moving rapidly downstream by using a slack-line cast or feeding line with flips or mends. In addition, the angler may be visible to the fish, despite the choppy surface. From downstream, the challenge is to keep a tight line, due to the rapid flow of water towards the angler.

Let’s look at how I would fish the stretch of water in the previous photo. The line drawing below is a depiction of the photo. It shows the riffle at the top,  flowing downstream to a deeper run, and continuing along the grassy undercut bank at the bottom, marked with a line of bubbles along the grass-edge. The letters A through F indicate possible positions from which to fish this water. 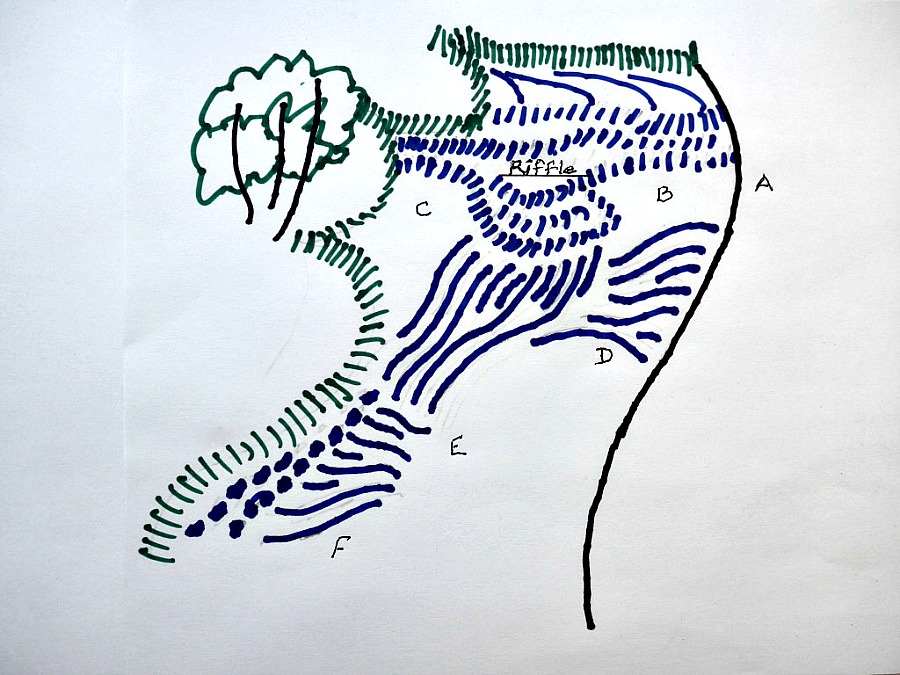 a riffle and run

Let’s say that we have arrived and there is no hatch in progress. But as discussed above, we know that the riffle is full of nymphs, larvae and minnows. Therefore, even if we can’t see them, trout are most likely feeding beneath the water’s surface. In this situation, I normally fish with two nymph patterns at a time,  or a streamer with a trailing nymph. I prefer to use a sinking tip line. Reliable nymph patterns include the copper John, pheasant tail, hare’s ear, prince, soft hackle, or a small wooly bugger.

Below is a picture of these nymph patterns. The prince nymph is at 11 o’clock, and moving clockwise, a pheasant tail nymph, a copper John, a hare’s ear, and a soft hackle; the fly in the center is a small wooly bugger. 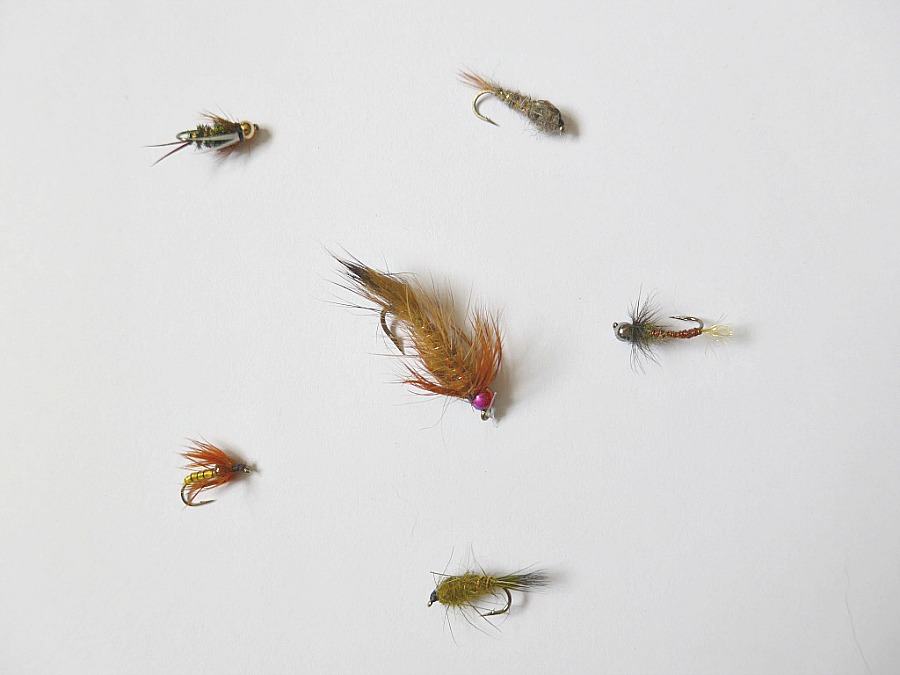 With no visible hatch, I would start fishing at position A and gradually wade to position B, casting just above the riffle. This should allow me to thoroughly fish the riffle as well as the upper part of the run just downstream of the riffle, where the larger fish are more likely feeding. Position C is another possibility, but the streamside tree would make casting across stream a bit more difficult.

Now let’s say that we have arrived, and there is a hatch in progress, and that we can see trout rising in the run below the riffle. I would first do my best to “match the hatch” with a dun selection. I tend to use parachute patterns, as I think that flush-floating patterns are more effective than more traditional dry flies. I would also drop an emerger pattern off the dry fly.

Below is a picture of two of my favorite emerger patterns. The fly on the left is designed to hang vertically in the surface film, while the glass-bead pattern on the right is designed to be fished just below the surface. I attach the first pattern to the eye of the dun-fly’s hook with about two feet of tippet, and the second pattern to the bend of the dun-fly’s hook with about 6-8 inches of tippet. 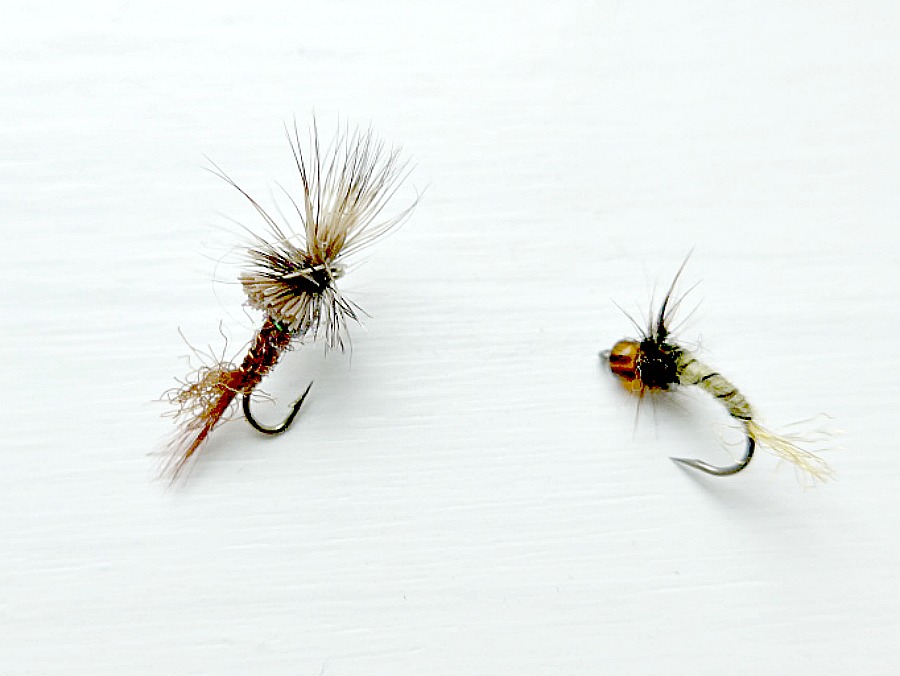 Fishing a hatch, I would start at position F, and slowly wade up to positions E and D. After netting all the visibly feeding fish (always an optimist!), I would then fish the riffle, using the same cast of flies. Approaching from downstream and casting upstream, I would fish from both positions C and B, which should allow me to cover the entire riffle.

It’s hard to go wrong fishing a riffle in all but the coldest winter months. In winter, trout move to deeper pools where the water remains warmer (see “Winter Fly Fishing- Strategies for Trout”, posted January 2014). Great forage is present in riffles, and trout will be feeding in the subsurface water nearly all day long. When a hatch begins, duns will emerge in the riffle and be carried into the quieter water just below, drawing trout to the surface. Thus finding the riffles in a stream will help you find feeding trout during most months of the year, and during most of the hours of any given day.