Fly fishing magazines frequently publish articles with titles like “Six Steps to Better Fly Fishing”, or “Ten Tips to Catch More Trout”. But in this article, “Fly Fishing Tips: How to Find More Trout”, I’m going to up the ante, and discuss THE ONE TIP which is most likely to put more trout into your net. I will assume that anyone reading this article is a moderately skilled fly fisher, able to fish with stealth, willing to fish surface or subsurface, and able to cast a long leader with a small fly when necessary, i.e., already able to employ all the usual fly fishing tips.

I think the most important and often overlooked fly fishing tip, the one that will put more fish into your net, is to “fish where and when others don’t“, or stated slightly differently, “be in the right place at the right time“! The only exception to this rule of thumb is if one fishes put-and-take stocked waters, in which case it is best to chase the truck and fish with the crowds. But for wild fish, delayed harvest waters, and catch-and-release waters, this is the most important step to take. I am such a practitioner of this that my son, Matt, gave me a T-shirt a number of years ago which says on the back, “Doesn’t fish well with others, stay 200 feet back!” Actually, I try to stay much farther away from others than that, but it certainly makes the point.

Let’s look at some common scenarios, beginning with a stream where there is a streamside trail. I never begin to fish at an access point. Instead, I hike at least fifteen minutes up the trail. It always amazes me how few fly fishers take this simple step, well, many steps actually, to reach water that is fished much less frequently. Distance from access points is the key, and in the instance of multiple access points, I always select a stretch of stream with the greatest distance between the access points, and walk to the mid-section of that stretch.

The same principle applies to streams with roadside access and multiple pullovers. I look for pullovers with room for only one vehicle, and those that look less worn or used. Even more helpful is to look for sections where the stream veers farthest from the road, especially sections that become hidden due to distance, forest or a canyon. Exploring these sections may take some time, but it is usually worthwhile.

In very heavily fished areas, I suggest getting out the Gazetteer, and searching national forest and BLM land for streams without direct access. Pack some food and water in your vest or backpack, and take an off-trail hike over hill-and-dale. The streams discovered will likely be smaller than those readily accessible for public use, but they will hold more fish, less wary fish, and will usually hold some bigger fish than you might expect. In addition, the scenery and ambience will be superior.

Now let’s look more closely at where to cast our fly. Having distanced ourselves from the most heavily fished water, we are still not going to be looking at unfished water, simply less-fished water. I therefore look for the most difficult-to-fish water, whether it be due to tough wading or streamside structure, making stream access more difficult. Such stretches will be the least fished. Another hint is to look for good water adjacent to or near a really good looking run. Most anglers will bypass small pieces of good water in their haste to get to the more obvious, really good-looking runs. So fish the nearby water; it will usually be more rewarding.

Lastly, I look for bits of good water that offer the most challenging casts. I honestly get an adrenaline rush when I see a low-hanging tree, decorated with tippet and flies. To me, always the optimist, it means that a big, savvy trout is lurking beneath, and if I am willing to chance sacrificing a fly in order to tempt him, I can net a trophy trout.

So much for where to fish, let’s next consider when to fish. In popular areas for fly fishing, where many or most people use guides, it is basically an eight to five sport. Therefore, the best fishing is usually found outside that timeframe. 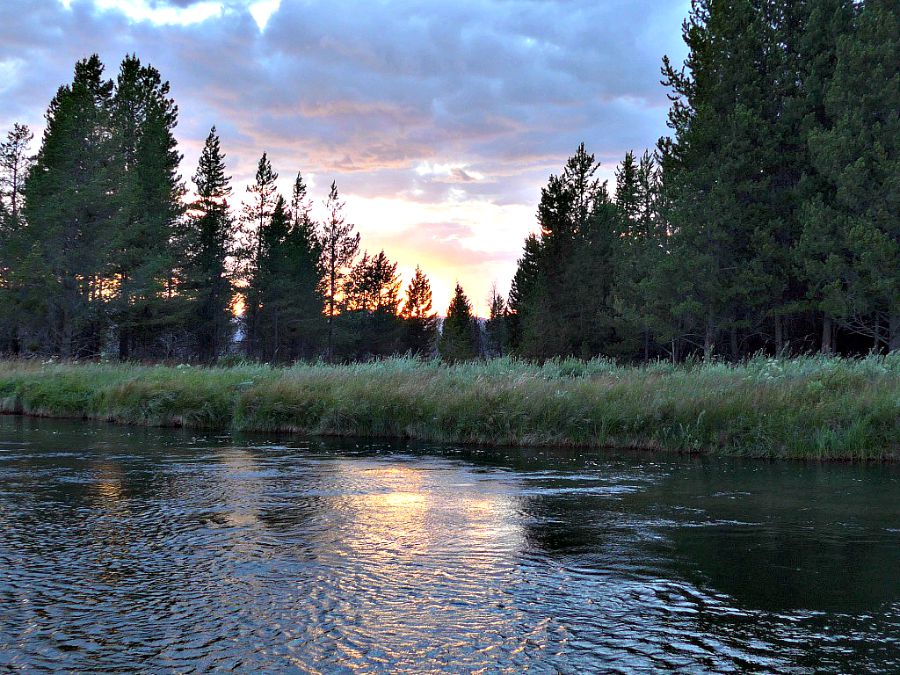 sunset, a perfect time to fly fish in the summer

Otherwise, if crowds are not a problem, water temperature is usually the best guide to when the fish will be most actively feeding. Below is a temperature chart of the Jefferson River, a freestone stream in Montana. Such charts are available for many streams on the USGS water site. 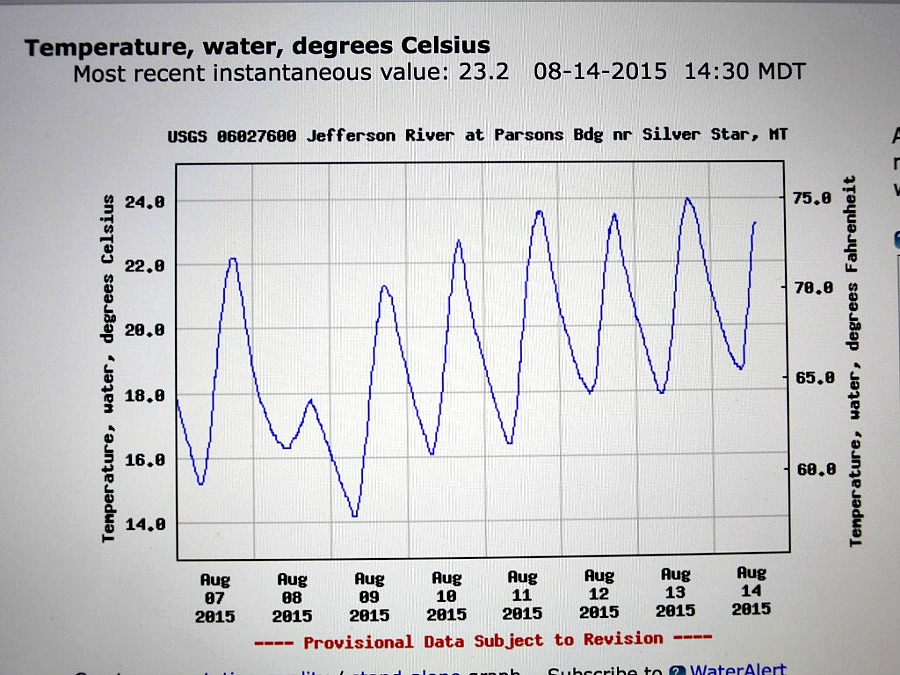 The chart reveals that on sunny days, the water temperature in this stream rises and falls about ten degrees. The lowest temperature is reached in the wee morning hours, shortly before sunrise. The highest temperature occurs about twelve hours later, in the early evening. It then starts to fall again. Trout are most comfortable and active when the water temperature is in the 50-65 degree Fahrenheit range. Therefore, in summer, when water temperatures often rise above the comfort level in the afternoon, fishing is generally best in the early morning and late evening. In winter, when cold water temperatures render trout lethargic, the reverse is true, and fishing is generally best in the afternoon. This is the basis for the old saying to “fish when it is most comfortable”. That is, the cool parts of the day in summer and the warm part of the day in winter.

The chart also reveals a temperature trend. In the August week seen above, the average water temperature is gradually rising day to day. During the latter part of the week, it remains above trout’s comfort level during the entire twenty-four hour cycle. Fishing on those days would not only be slow, but also dangerous to the fish. They will suffer a higher mortality rate from the stress of the fight, despite being released. However, when the next cooling period arrives, the fish will be very active and feeding voraciously, as they recover from the warm period. That would be a great time to be on the water. The reverse is true in winter. After a long cold-spell, a warming trend will invigorate the fish.

And what about cloudy days? Based on the above information, one might assume that cloudy days would be good in the summer, as the clouds would limit warming of the water, and the opposite would be true in the winter, as the water would remain cold and the fish lethargic. But as is often the case with nature, human logic would lead us astray.  Aquatic insects that hatch in the summer emerge with the sun-driven changes in water temperature. Without those changes, the hatch is usually scant, and rising trout hard to find. Similarly, terrestrial insects are most active and available to trout on sunny days. In winter, cloudy days often give rise to olive hatches, and midge-weary trout will vigorously feed  upon them.

So next time you are planning to go fly fishing, take the time to carefully consider exactly where and when to be on the stream. Experienced anglers know that more fish can be caught in an hour or two than during the entire remaining hours of the day combined, provided that they are “in the right place at the right time”. 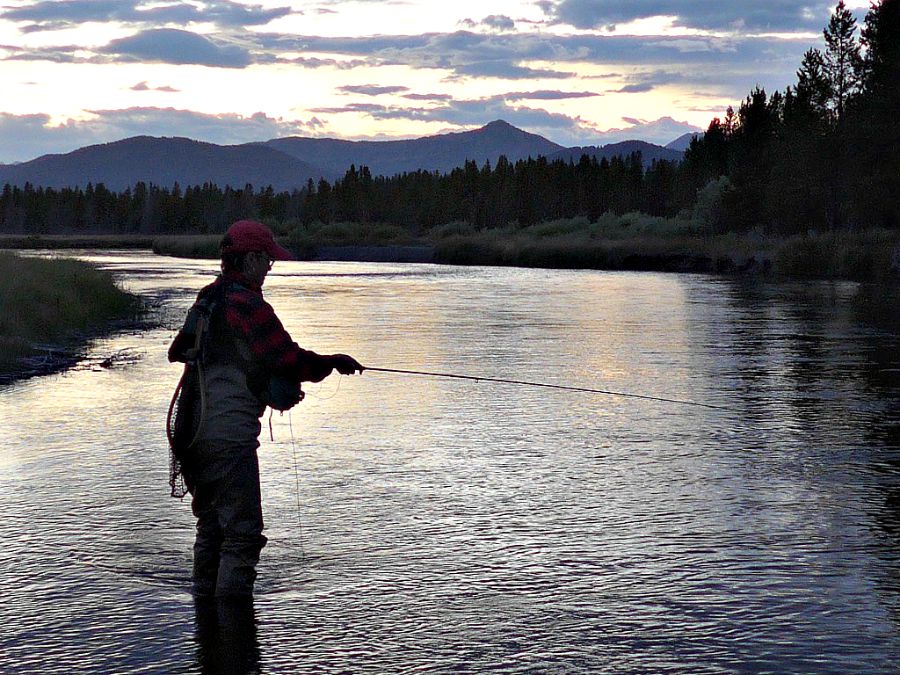