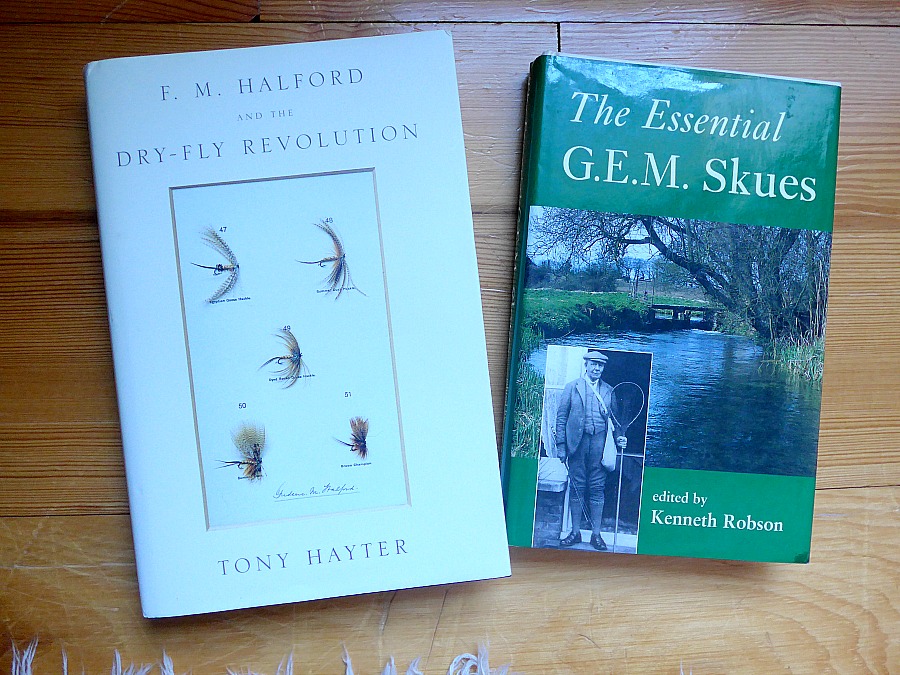 Halford and Skues- both, legendary fly fishers and authors in a time gone by. Like many fly fishers who angle for trout, I am enamored of the writings of fly fishermen from the latter part of the Victorian era. It was during that period that much of what we know and practice today was first discovered and honed. These two fly fisher-authors, F.M. Halford, the “Father of dry fly fishing”,  and G.E.M. Skues, the “Father of nymphing”,  were the dominant voices of their time.

Although Halford and Skues were in the same fly fishing club, they became antagonists in the discussion of the proper way to fish a chalk stream. I wanted to read further about them, and this winter read a biography of each. Below are the brief reviews.

Tony Hayter is the only author given access to papers held by the Halford family. With these and his extensive research, he has been able to give us a most thorough biography. He also provides many glimpses into English society and the gentlemanly world of fly fishing during the late 1800’s and early 1900’s.

He begins with Halford’s childhood years, and follows his life chronologically. Much historical detail is presented, providing a backdrop for Halford’s emergence as the “Dry Fly Man”.

For me, Hayter hits his stride in the last five chapters. They begin in the year 1887, one year after Halford’s first book, “Floating Flies and How to Dress Them: a Modern Treatise on the Most Modern Methods of Dressing Artificial Flies for Trout and Grayling“. Although Halford was credited with starting “the dry-fly revolution”, he relied heavily on his fishing companions,  Marryat, and Hall. They provided many of the observations and fly patterns presented by Halford.

Over the remainder of his life, Halford published six more books, and over 200 journal articles about dry fly fishing. Hayter provides a great deal of historical and technical information from Halford’s many writings, in a very readable manner.

This is an excellent book for anyone interested in the history of fly fishing.

In contrast to Hayter’s approach, Robson lets Skues tell his own story. Robson provides the threads that skillfully tie together excerpts from Skues’s many writings. Fortunately, Skues was an excellent writer as well.

While Halford collected and codified other’s thoughts and observations, Skues was an original thinker. His writings, collected here, provide a plethora of fly fishing information. He studied aquatic insects, their imitations, trout behavior, and fishing techniques of all sorts. A critical observation was that trout feed mostly subsurface. Thus he developed fly patterns and techniques to catch them when not feeding on the surface.

Unfortunately, most Victorian gentlemen desired to codify their fly fishing, just as they did their social lives. Halford and Skues argued their respective positions on fly fishing, but the members of The Fly Fishing Club of England sided with Halford. As a result, nymph fishing was declared unsportsmen-like, and banned from the chalk streams of England. Therefore, for nearly a century, one had to cast a dry fly, and only to a rising trout, when fishing in southern England. No wonder that benches were placed along their streams!

In the end, I sympathized with Skues. Most of his contemporaries failed to recognize or accept  his many original insights. This caused so  much angst for Skues, that he left The Fly Fishing Club of England, and sought other waters to fish on his own.

This too is an excellent book for those interested in the history of fly fishing, and continues to be a wonderful resource of still relevant fly fishing information.