I have previously written about fly fishing for trout in the fall, 10/14, winter, 1/14 and 1/15, and spring, 4/14. With this month’s article, “Summer Fly Fishing- Strategies for Trout”, I will complete the cycle of seasons.

Each of the seasons alter conditions in trout streams, especially freestone streams, which in turn affect trout behavior. These changes determine where trout will hold, when they will feed, how they will feed, and what they will feed upon. Understanding these changes allows fly fishers to develop their strategies, and arrive streamside at the right time. They will come prepared with the right equipment and flies, and thereby maximizing their opportunity to land some nice trout.

Labeling the seasons by calendar months is of marginal value to the fly fisher. Seasonal fishing conditions are largely dependent upon the latitude and altitude of a watershed. Therefore, for the purpose of this discussion, I will book-end  summer as that period of time between the end of the spring hatches and the arrival of heavy frosts, sufficient to put an end to the summer hatches, and finish-off the last of the hardier terrestrials.

While spring is a time of change, often marked with tumultuous weather, varying water conditions, brief hatches, and eager, hungry trout, summer is a time of steady weather, with long sunny days, clear water, more predictable hatches, but stubborn, finicky trout! The hot, summer sun leads to lower water levels and higher water temperatures. Daily fluctuations in the water temperature often exceed more than ten degrees Fahrenheit. In many freestone streams, the increase in mid-day temperature becomes uncomfortable for trout. In addition, less oxygen is available in the warmer water. Therefore, trout will seek holding lies during the warmest part of the summer day, just the reverse of their behavior in winter. Holding lies typically provide cooler water, a rich supply of oxygen, and overhead protection from predators. Such lies include deep pools and runs, undercut banks, water shaded by overhanging trees, and oxygen-rich riffles. When in such holding lies, trout are generally not feeding, although they can be tempted with a meaty offering.

In summer, then, feeding typically occurs during low-light periods, that is, in the early morning, before the water warms, and in the evening, when the water begins to cool. Co-incidentally, the summer aquatic bug hatches peak at these times as well. During particularly harsh summer-spells, trout may stay in their holding lies all day long, and feed only at night. The most extreme example of this that I have encountered occurred during a hot, drought-ridden summer in Montana in 1995. I was fishing Rock Creek with my son Matt. Daytime water temperatures were dangerously high, in the mid seventies, and there were no hatches or feeding fish. So we staked out a stretch of river around ten PM, and watched with uncertain anticipation from the edge of the stream. Around midnight, under a full moon, a dense caddis hatch began, and soon we could hear trout slurping everywhere. We carefully waded into the water, and using the sounds of the feeding fish, tried to cast our flies a bit upstream of them. It was almost impossible to see our flies, and therefore, we set our hooks if we heard a slurp in the vicinity of our fly. Amazingly, we hooked a fish almost every time. 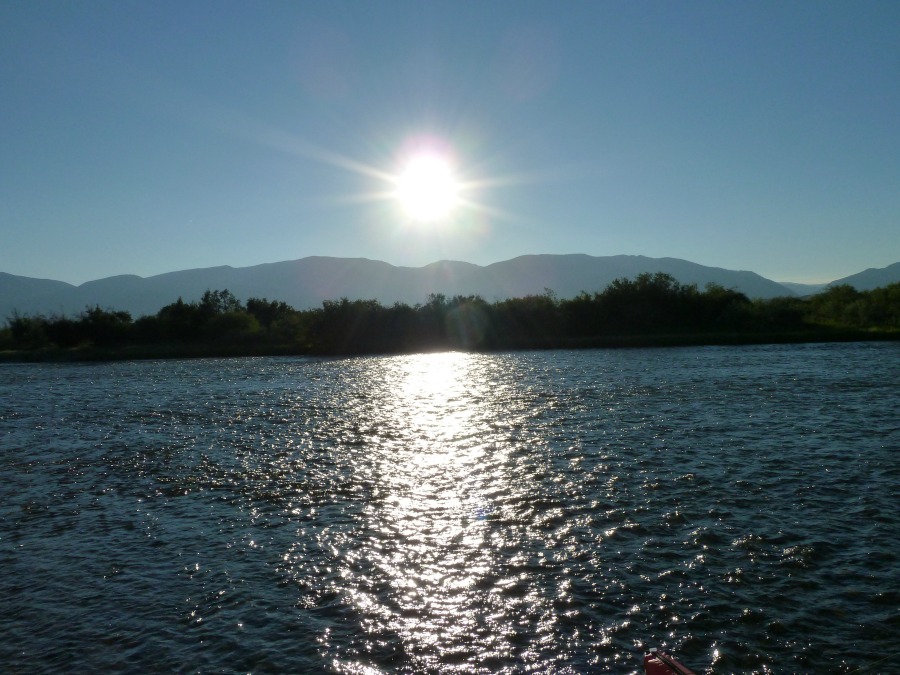 The picture above illustrates perfect conditions for night-time fishing, with a full moon illuminating the water’s surface.

Although bug populations vary from one watershed to another, the first summer hatch in many streams is the sulphur or PMD hatch. Although this hatch actually begins in late spring, it continues for six to eight weeks, and overlaps with the other classic summer hatches. Initially, sulphurs hatch in the mid-morning, and again in the evening, when they also swarm, mate and lay their eggs. As summer advances, the morning hatch diminishes, and the evening hatch occurs later, often not starting until dusk, and extending well into dark. The bugs themselves become smaller, ranging from a size 14 during the early weeks, down to a size 18 during the later weeks. This is because there are several species of mayflies that we regard as sulphurs, and the larger species hatch earlier, while the smaller species predominate during the later weeks of the hatch.

For the dry fly fisher, the sulphur hatch offers prime-time fishing. The trout will typically take any flush floating pattern of the proper size, and light cream color, if presented well (see “Presentation I: Fishing the Hatch“, posted 5/2015). If they are hesitant, an emerger pattern, such as a Quigley cripple, or a non-weighted nymph trailed behind a dry fly, will usually put one into fish. 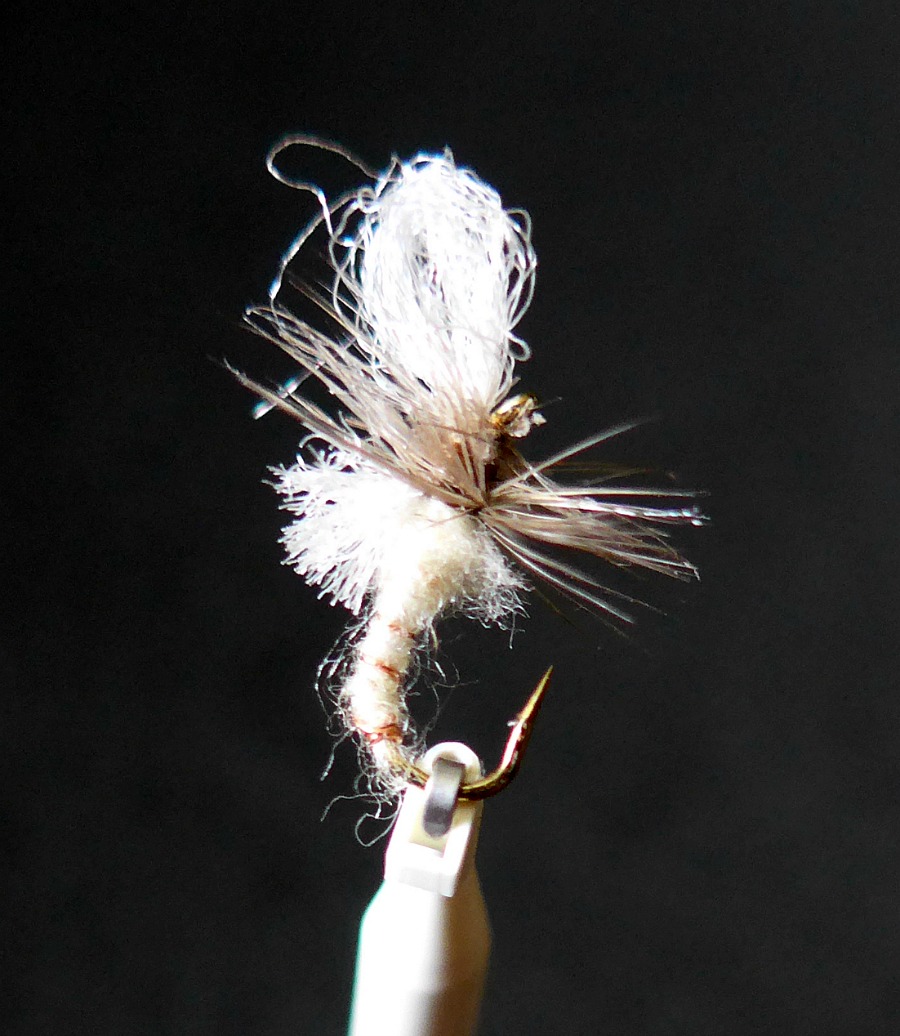 The next significant summer hatch is the trico. This hatch also begins in mid morning, and persists for six to eight weeks. However, as summer conditions continue to warm the water, the hatch begins earlier and earlier, finally occurring at daybreak. The hatch itself draws only modest attention on the part of the trout. Tricos hatch with only one thing on their minds, sex. They quickly swarm, mate, deposit their eggs, and flop onto the water’s surface, exhausted, as spent spinners. This is when the real fishing action begins, and lasts for perhaps an hour or so. In contrast to the sulphur hatch, there is no hatch later in the day. When fishing this hatch/spinner fall, it is essential to fish a spinner pattern, as seen below. I usually fish a pair of them; it is simply amazing how much easier it is to see a pair of small, size 20 or 22 flies, than it is to see one fly. 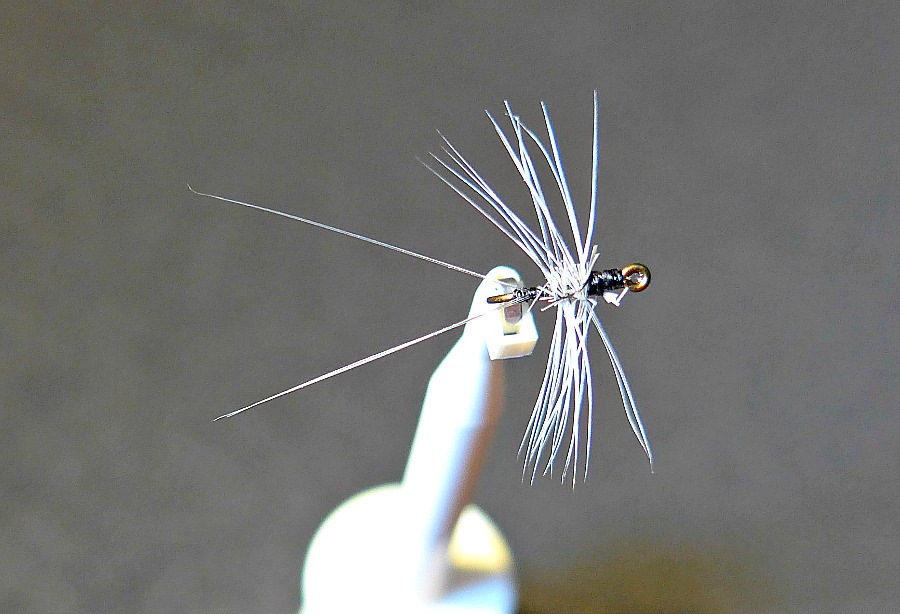 The last classic summer hatch is the caddis hatch. According to Gary LaFontaine, author of “Caddisflies“, there are over a thousand caddis species. It is therefore not surprising that caddis hatches can occur during most seasons, but the most dense hatches, which seem to electrify trout, occur in the mid to late summer, and continue until heavy frosts arrive. Although they hatch through-out the day, there is a mid-morning peak, and a very heavy hatch at dusk, accompanied by intense egg-laying activity by those bugs that hatched earlier. The evening hatch and egg-laying continues well into dark, sometimes literally smothering the water’s  surface, as well as the fly fisher! Trout feed heavily at this time, but can prove to be difficult to catch if fishing only with a dry fly imitation. Most of the feeding actually occurs just below the surface film, and a pupa pattern fished there, especially if lifted to the surface to imitate an actively emerging bug, will draw vicious strikes. An old fashioned wet fly will imitate the pupal stage quite nicely; LaFontaine’s pupa pattern is another excellent fly to use at this time. 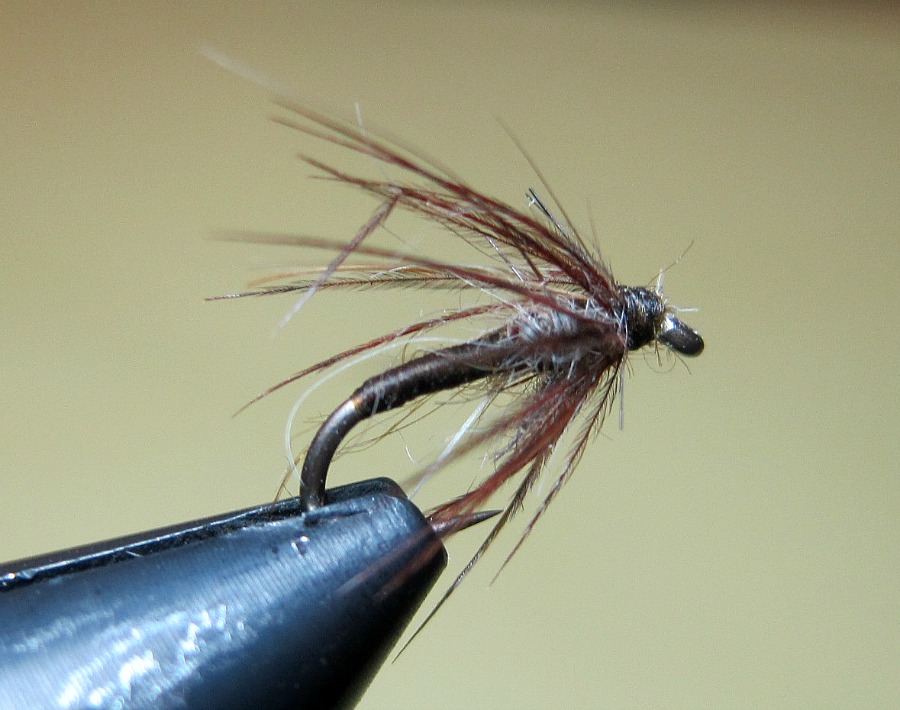 Of course the “hatch” unique to summer is the “terrestrial hatch”, that is, grasshoppers, beetles, crickets, ants etc. They fill an important niche in the trout’s food chain in several ways. During a typical, late summer day, they make their appearance during the warmest part of the day, that is, after the morning bug hatches are well over. Although the trout will have moved to their holding lies in the bank undercuts, or under streamside trees and brush, this is precisely where terrestrials are most likely to enter the water. Terrestrials are “meaty enough” to get the attention even of holding trout, offering the afternoon fly fisher an opportunity to catch some fish during this otherwise unproductive period. To imitate a terrestrial falling into the water, slap the fly onto the water’s surface, then twitch the line to impart a swimming or struggling motion to the fly. My favorite terrestrial is the cinnamon ant, because it seems to be the trouts’ favorite as well.

In addition to filling the afternoon niche, terrestrials also fill the late-summer niche. The aquatic bug hatches begin to wither when cooler nights and early frosts arrive, but terrestrials are more resistant to these changes. They continue to be a good source of food for trout, and extend summer dry fly fishing for the fly fisher, until they too succumb to the heavier frosts of fall, and the next major seasonal change in  trout behavior occurs.

An appreciation of the seasonal changes in streams, hatches, and trout behavior is essential, if fly fishers wish to  to be proficient in their pursuit of trout. Hopefully my series of articles will prove to be of help.