We’ve reached the stream, and to our disappointment, there are no bugs in the air. Except for spring and early summer, when healthy trout streams offer several hatches nearly every day, this is what we usually face, a nonhatch situation. But before automatically tying on our go-to pair of nymph patterns or a streamer, we should take some time to study the stream and riparian area.

Mayfly hatches frequently happen during the late evening or at night. Although there is no hatch when we arrive the next day, there may still  be some spent spinners collected in eddies or along the stream’s edge. 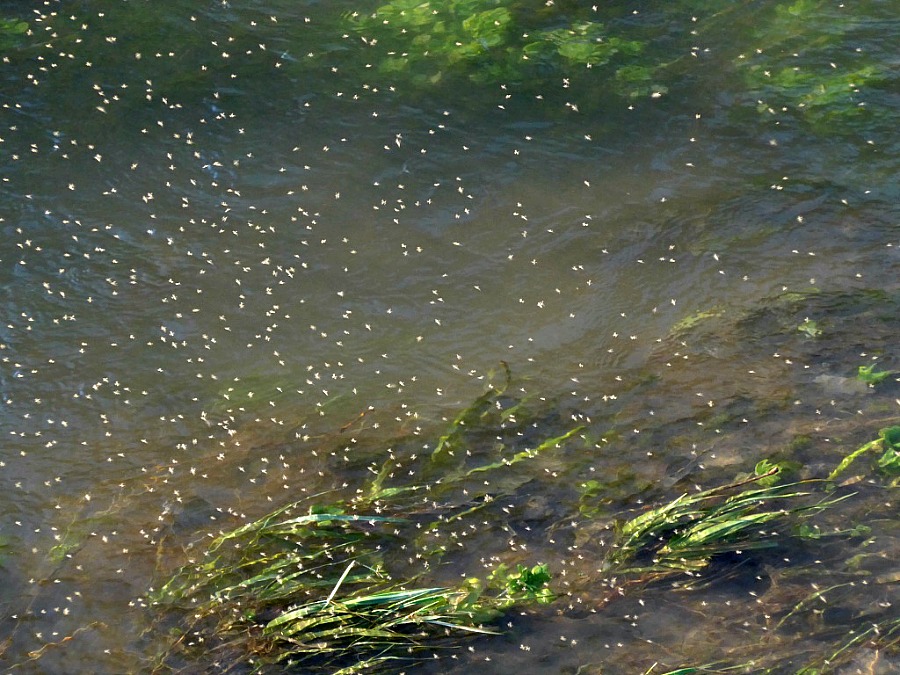 A study of the streambed may reveal evidence of cased caddisflies. 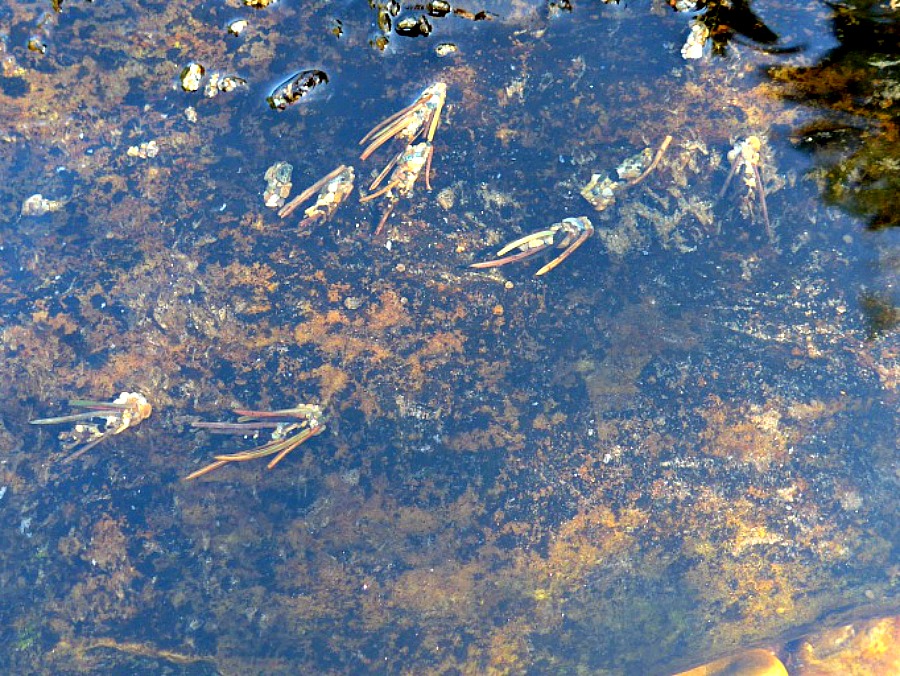 Cased Caddisflies on the streambed

If we lift and turn over a few streambed rocks, we can see the size and color of prevalent nymphs. And rocks along the edge of the stream may reveal evidence of recent stonefly emergence. 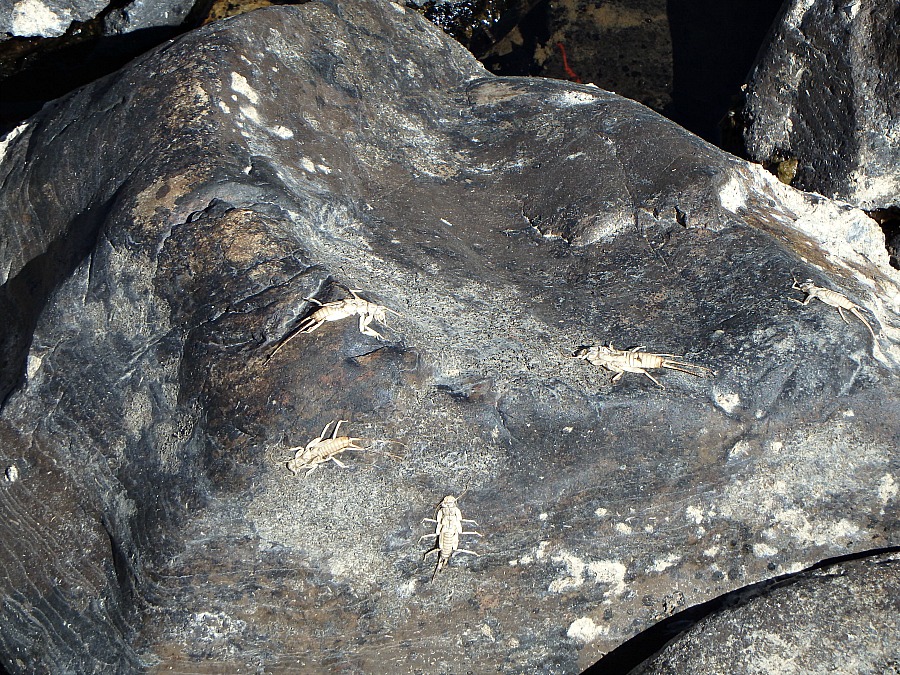 Stonefly exoskeletons on a stream-edge rock

A look and a shake of the streamside brush may reveal caddis or stoneflies resting and mating. 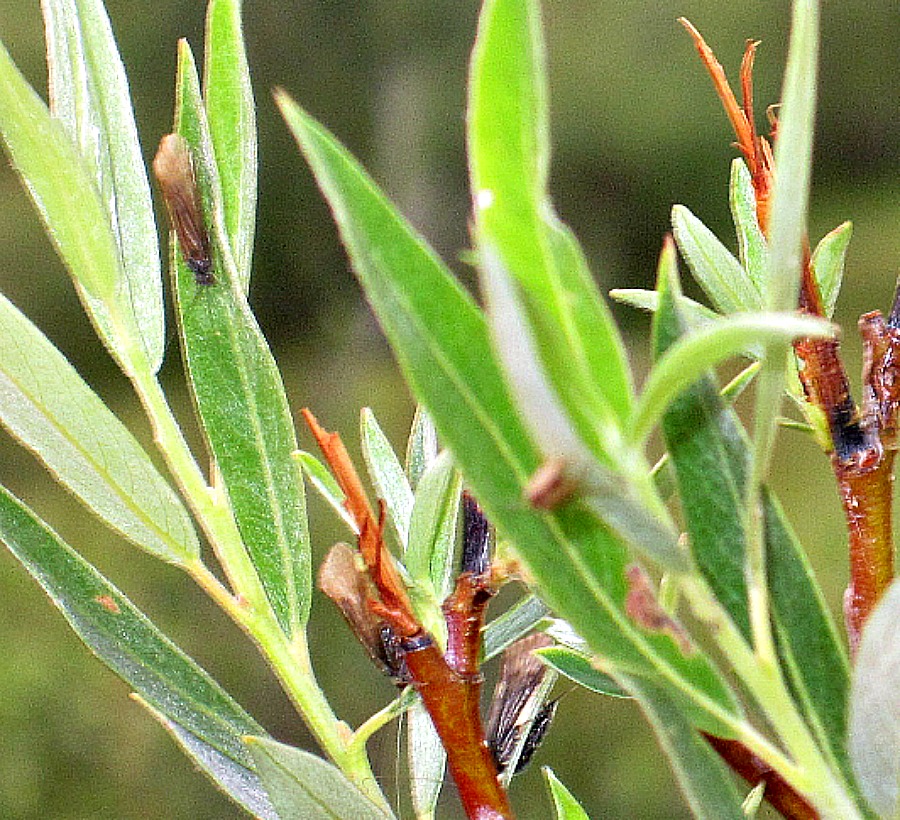 Caddisflies in the streamside brush

And in warm months, as we approach the stream, we have the opportunity to note prevalent terrestrials in the grass, and note their size and abundance.

Armed with these observations, we can first decide whether we want to fish the surface, or the subsurface. After that, we can make educated decisions regarding fly selection based on the insect activity that we have observed.

Let’s consider fishing the surface first. On an early-morning summer day, hatches have usually not yet begun. Terrestrials are still warming themselves and not yet active. But if we observed spent spinners in the eddies, a rusty spinner is a good choice as a searching fly. 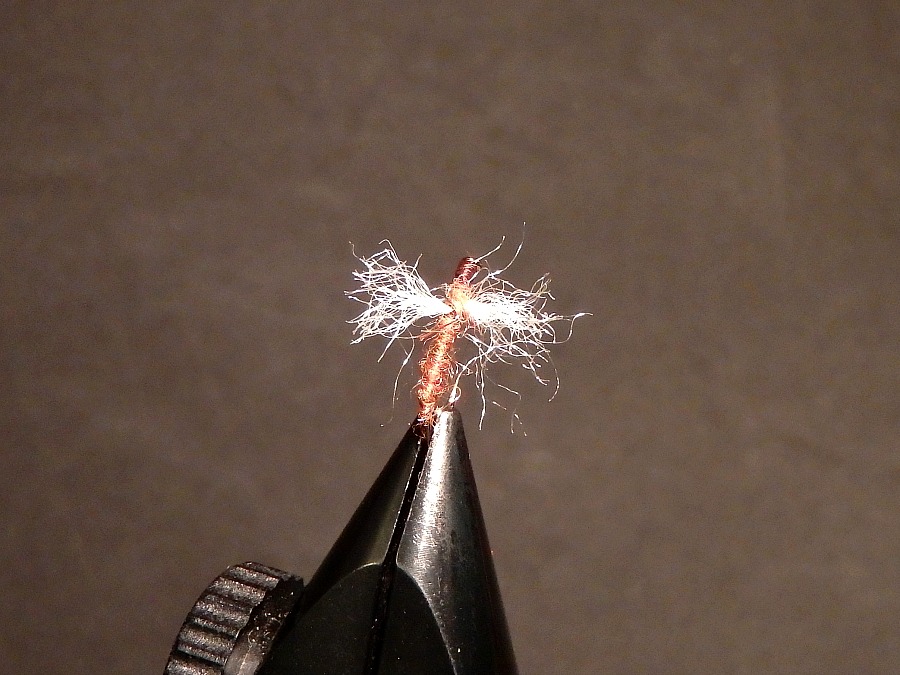 I almost always fish tandems of flies, and would add an attractor, like a parachute Adams, to fish along with the spinner pattern.

Later in the day, especially if the ‘hoppers are clacking, I would fish a ‘hopper pattern, perhaps with an ant as a tandem. If I found caddisflies in the streamside brush, rather than a ‘hopper, a caddis pattern would be a good choice , as they hatch sporadically throughout most of the day.

In the winter, absent a hatch, fishing the surface with dry flies is generally not very productive. But most trout streams hold midges, so if determined to fish the surface, I would select a midge pattern, probably coupled with an attractor pattern like a parachute Adams.

Regardless of the season, when faced with a nonhatch situation, I always remind myself that roughly 80% of a trout’s diet consists of subsurface fare. Thus, in the absence of a hatch, I spend most of my time fishing the subsurface.

The parade of Mayfly hatches begins in the spring. The nymphs have reached their maximum size, and are more active as they ready themselves for the next stage of their lifecycle. Thus, in the absence of a hatch, I usually begin to fish with nymphs. Generic patterns like the Copper John, BH Pheasant Tail, Gold-Ribbed Hairs Ear, or the SB Beadhead Nymph all generally work well. I use my streambed observations to guide my choice of size and color.

When fishing small to medium sized streams, my preference is to tightline nymph. 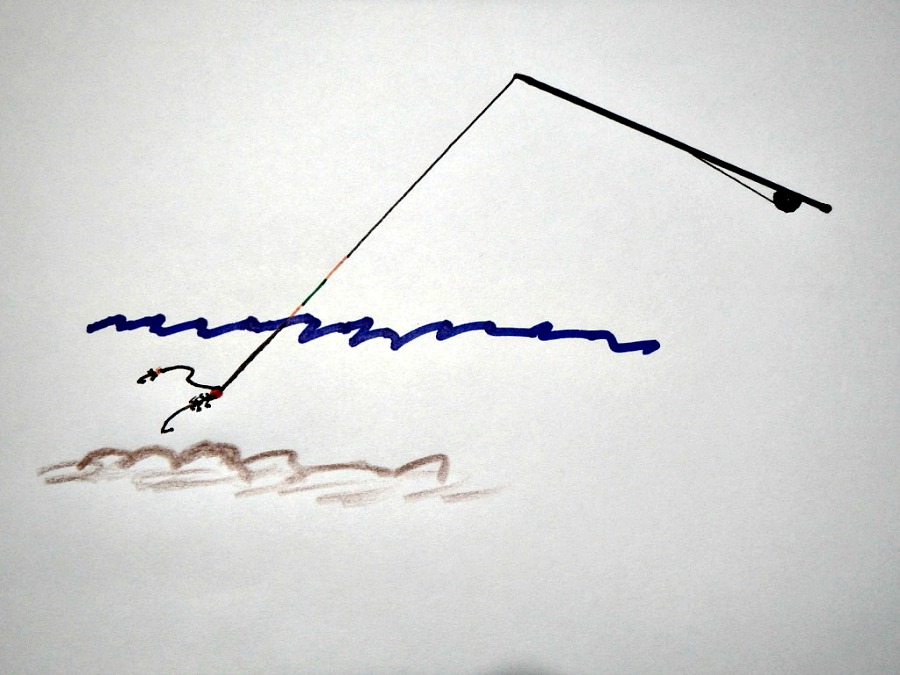 Tightline Nymphing, with leader and line off the water, sighter partially submerged

This is the most versatile nymphing method. With the line and leader held off the water, there is a tight connection to the nymphs. By raising or lowering the rod tip, the angler can adjust the depth of the nymphs during a drift, keeping them close to the stream bottom, where the fish are feeding. The nymphs can also be steered or swung about stream structures. In addition, the tight connection allows bites to be readily felt, or with the use of a sighter, seen.

A 10-11 foot rod allows a reach of 20-25 feet, nicely covering smaller streams. If fishing larger streams, requiring a greater reach or longer drifts, a dry-dropper rig is usually a better choice. If the water is more than 3-4 feet in depth, I often switch to a sink-tip line. This gets the flies down in the water column, and offers the same versatility as a tightline rig.

As spring merges into summer, Caddisflies make their appearance on many streams. If I find evidence of Caddisfly activity, I often try tightlining with old fashioned wet flies. Swinging them downstream, with frequent stops to bring them to the surface, nicely imitates rising caddis pupae.

In the fall and winter, the heavy spring and summer hatches have become a distant memory. The diminutive midge becomes the staple on most streams, punctuated with occasional olive hatches. My nymphing tactics remain unchanged, but fly patterns are smaller, size 18 and 20. It’s hard to beat a zebra midge as one of the flies in a tandem. If I noted evidence of stoneflies in the stream, a stonefly nymph fished with a zebra midge is a great tandem at this time of the year.

Of course, with fall comes the urge to tie on a streamer. Although streamers can be fished during any season, they really come into their own in the fall, when other food choices for trout become small and scarce. If fishing is slow with a streamer alone, I usually trail a small nymph.

So, no hatch? Think season and what bugs might be present at that time of the year. Then, using streamside observations, make educated fly selections. The stream, its breadth and depth, should then guide our choice of tactics.