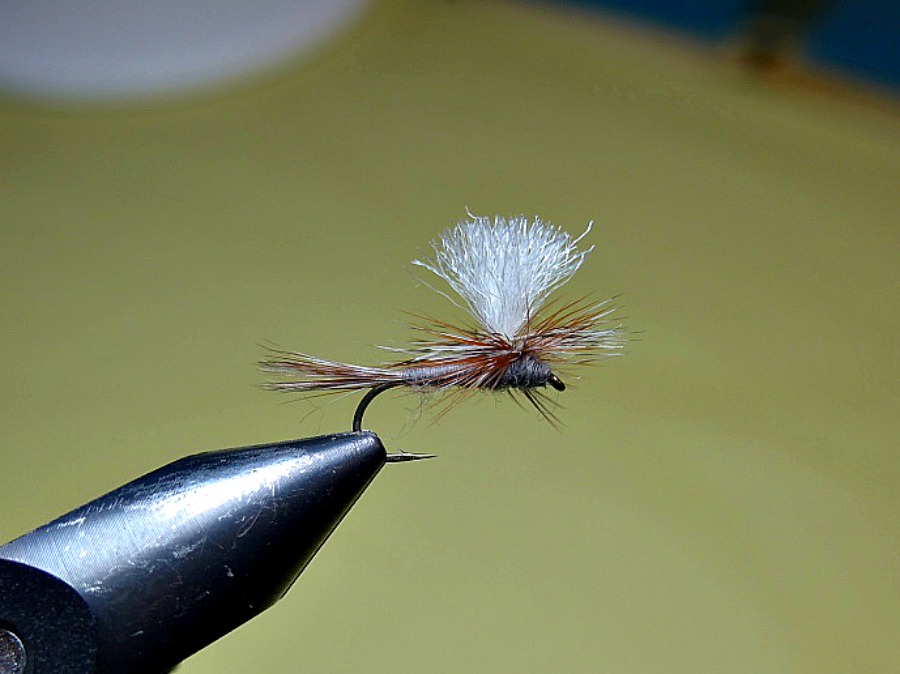 The Parachute Adams; an Attractor Fly for Everyone

I am a tyer of flies. I’ve been tying flies almost as long as I have been fly fishing, roughly fifty years. Tyers fall into two general groups, impressionists or exact imitationists. I belong to the former, and tie my flies to roughly resemble a stage of several flies. I also tie them with materials that will  impart movement, in a life-like manner when fished. As an impressionist, one of my favorite flies to both tie and fish is the Parachute Adams. Indeed, I think that most fly fishers would include the Parachute Adams in their short-list of favorite dry flies.

Given its popularity and effectiveness, I have often pondered the “who,what, where, when and why” of the Parachute Adams. Like many flies that have stood the test of time, it has evolved through a number of iterations. So let’s begin with the original Adams fly.

Its history is nicely recounted in “The History of Fly Fishing in Fifty Flies”, by Ian Whitelaw (http://amzn.to/2awQZe8). The story goes that in the summer of 1922, Charles Adams and his son were fishing the Boardman River in northern Michigan. They were frustrated at being unable to sufficiently match a hatch to put fish into their nets.

Leonard Halladay, a friend, professional guide and fly tier, lived nearby in Mayfield. Charles paid him a visit, and asked for help with fly selection. He was given the original fly. It’s unclear what bug, if any, it was to specifically imitate. Nonetheless, it proved to be quite effective when Charles and his son returned to the Boardman. Halladay continued to tie and sell the new fly, and named it after his friend, the “Adams fly”.

Originally, the Adams fly had a tail of golden pheasant tippet fibers. Its wings were made of grizzly hackle, which were pointed forward. But over time, it was transformed into a Catskill style fly, with upright wings and a hackle-fiber tail. It is still tied and fished in that fashion today, nearly one-hundred years after its origin.

The parachute style of fly tying developed independently in both America and Scotland. In Scotland, the concept of wrapping the hackle horizontally is attributed to Helen Todd. She was an employee of Alexander Martin, a fly fishing company in Glasgow. After reading an article in an American fly fishing magazine that described  tying hackle “divided and spent”, she conceptulized wrapping the hackle horizontally to achieve the same effect.

To facilitate tying the parachute fly, Martin designed a hook with a metal post. He used a sproat hook, and placed the post about 1/3 back from the eye. The hackle was wound about the metal post. He applied for a patent in 1931, and it was approved two years later. The hook was advertised and sold as the “ride-rite” hook. House of Hardy, the famous English fly fishing company, began to sell both the hooks and parachute fly patterns in 1934.

At nearly the same time, William Brush, an American, developed a similar hook, the “gyro”. He used a traditional dry fly hook, and the metal post was placed a bit farther forward than the “ride-rite”. He applied for a patent in the same year as Martin, 1931. Unfortunately, it took three years to be approved, a year longer than the “ride-rite”. Consequently, he never received the same degree of recognition for his development as did Alexander Martin.

The parachute patterns were noteworthy for landing upright on nearly every cast, and being very visible to the fly fisher. But both parachute hooks were on the  heavy side, and consequently, the fly did not float well. Therefore, their popularity was short-lived.

Nearly forty years later, in 1971, Swisher & Richards published their noteworthy book, “Selective Trout“.  They advocated the effectiveness of flush-floating flies. The parachute fly was among the several patterns felt to be most effective. Rather than using a special hook, they created a post made of deer or calf hair, which kept the fly light. Today, CDC feathers and artificial materials such as Antron are frequently used as well.

The modern Parachute Adams and the parachute style of tying have continued to be very popular. They land upright, float well, and are very visible to the fly fisher. Most importantly, trout judge them to appear very tasty!

As is the case for all attractor flies, it remains unclear exactly what the Parachute Adams imitates or suggests to trout. While its traditional gray color most closely resembles the blue winged olive, its effectiveness is not limited to that hatch.

I think its shape or form, rather than its color, is the most likely reason that trout favor it so highly. Lying flush on the water’s surface, it creates a silhouette that could resemble a spent spinner or a crippled dun. Both of these stages are helpless, and are easy pickings for hungry trout.

Every fly tier has their own recipe for tying a fly, and below is my recipe for the Parachute Adams-

The Parachute Adams is a very versatile attractor fly. It can be fished as an imitation of olives, callibaetis, midges or tricos, changing only the size. With a change of body color, it can imitate other bugs as well. But its greatest utility is that of an attractor fly, fished when no hatch is present, or with no intention to imitate a specific hatch. However it is fished, it invariably draws the interest of trout. If you haven’t fished one recently, you may want to give it a try!

2 thoughts on “The Parachute Adams; an Attractor Fly for Everyone”