Since the advent of fly fishing, fly fishers have had their demons. The summer trico hatch is mine. Through the ages it has frustrated fly fishers sufficiently to earn the moniker “white-winged curse”! A few weeks ago, I ventured to a stretch of the Madison River, to once again take on the curse.

I arrived shortly before 9 am, and noted a few bugs in the air already. About 10-15 minutes later, someone threw the switch; the air filled with hatched, mating tricos. 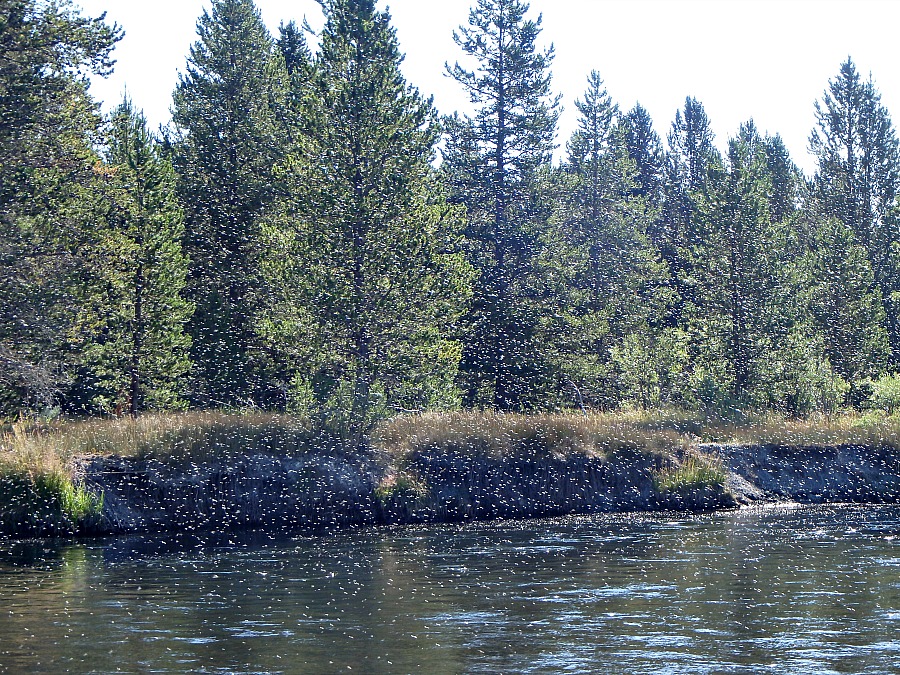 During the “blizzard” hatch, only an isolated trout or two appeared. None fed repetitively. Despite their pea-sized brains, they knew what was coming, and were content to wait. So was I.

In another 20-30 minutes, the spinner-fall began. The water’s surface was quickly covered with exhausted, spent spinners. 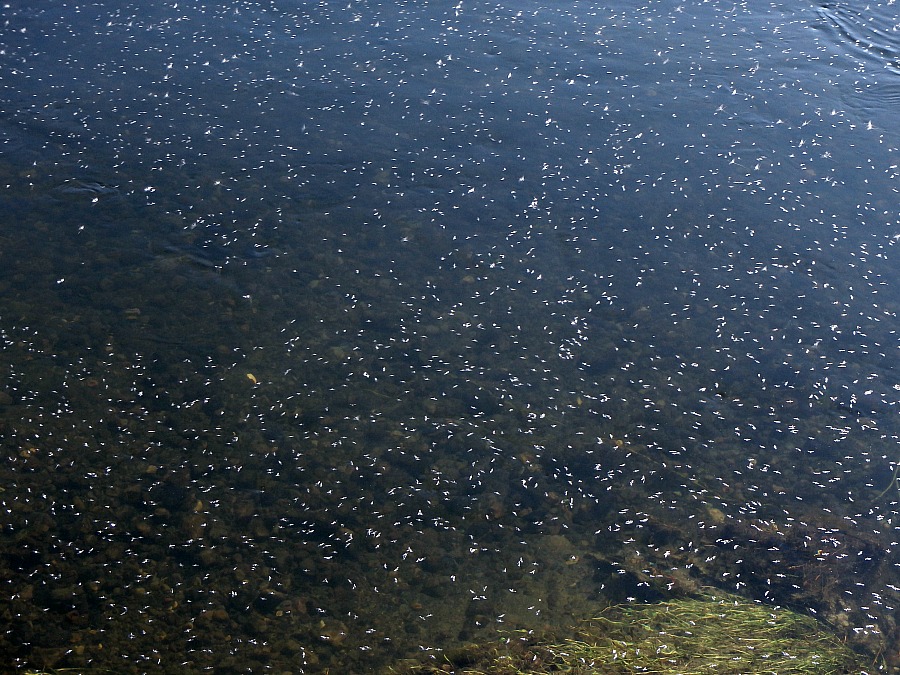 I easily counted 15-20 riseforms in the run I was about to fish. But no snouts broke the surface. Despite the massive amount of food on the surface, the trout were feeding just below the surface.

My first offering was a tandem rig of a parachute Adams and a Quigley Cripple. For the parachute, I used a fly 1-2 sizes larger than the actual bugs. One reason is that my 73 year-old eyes can’t follow size 22-24 flies anymore. But more applicable for younger anglers, I find that the trico hatch is the one exception to the rule of “go smaller”. Sometimes I think going larger is effective because there is a simultaneous callibaetis hatch, and the fish prefer the larger mouthful. Another possibility is the clumping of the tricos that occurs. Two or three bugs often clump together, making for a bigger mouthful.

I drifted my flies over several feeding fish. Although I caught one, the many refusals told me that they were likely feeding deeper in the water column. I didn’t have a good emerger pattern with me, so I replaced the cripple with a zebra midge pattern.  This yielded another two fish, but the refusals mostly continued.

Then the stop-switch was thrown, and the trout stopped feeding. The suddenness of both the start and stop of this hatch, and the associated feeding, always amazes me.

Upon returning home, I quickly hit the tying bench and tied a bunch of emerger/drowned trico patterns. I tied two CDC patterns. The one below was tied without any weight, to fish in the film. 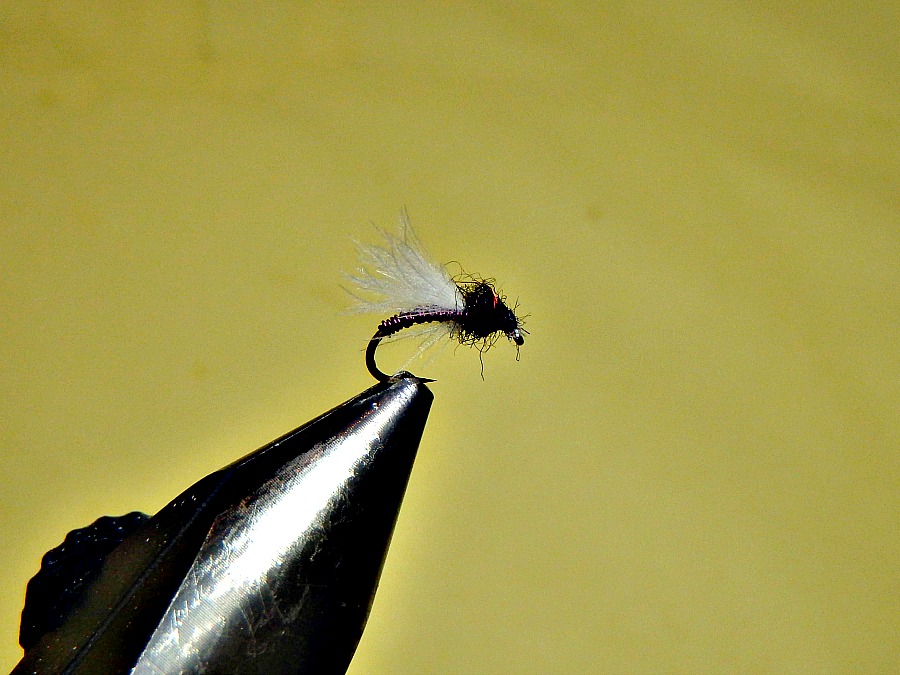 The second one, seen below, was tied with a tungsten beadhead, to fish several inches below the film. 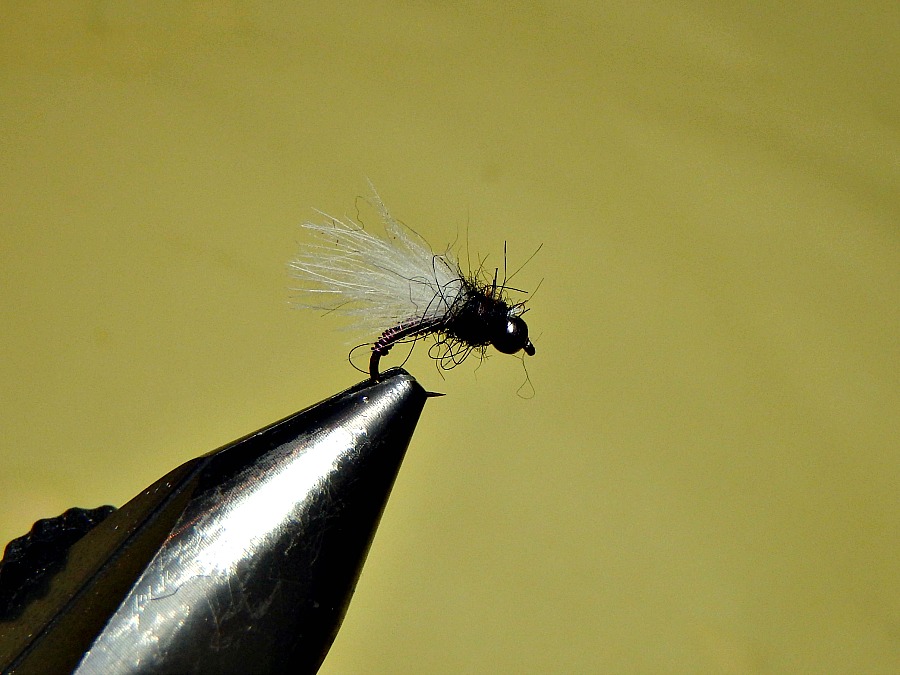 I returned a few weeks later, armed with my new flies. As expected, the hatch and spinner fall came right on time. I started with a #14 parachute Adams again, and trailed the new beadhead emerger. After many refusals, I finally caught one modest-sized fish. A Quigley cripple did little better. Finally, although only tidlers were breaking the surface, I tied on a spent spinner; same result.

Faced with so many refusals, I went through my mental checklist. My leader was fifteen feet long, with 2-3 feet of 5x tippet. I was fishing downstream, assuring that the flies drifted naturally and arrived before the leader. What flies had I tried? Lastly, what did the riseforms indicate, surface or subsurface feeding?

So, what to do? Unmatch the hatch with a terrestrial, like an ant, or one more attempt at fooling these “educated” trout with a trico pattern? I chose the latter. Taking the spinner pattern, I smashed it a bit, and thoroughly soaked it. The plan was to fish it just below the surface, imitating a drowned spinner. To my surprise, it worked! I was rewarded with a strike every second or third drift.

So today, it was a drowned spinner that put fish into my net. I could not appreciate any difference in the hatch or riseforms from my previous visits, when a similar tactic failed. I guess that’s why we call it “fishing”; we’re always fishing for answers.

Meanwhile, the white-winged curse continues to invade my dreams!