I have been reluctant to write a blog about trout stocking, because it is a very emotional issue for me. I truly love fly fishing for trout, and therefore would like to see our watersheds managed in ways to maximize the number of trout in them, ALL YEAR LONG. I’m an advocate of Lee Wulff’s famous statement that “gamefish are too valuable to only be caught once”, and therefore release all the trout that I catch. The antithesis of this is what Howell Raines, in “Fly Fishing Through the Midlife Crisis“, calls “the Redneck Way of Fishing, which holds that the only good trip (fishing) is one ending in many dead fish”.

Unfortunately, here in Virginia, the Department of Game and Inland Fisheries (VDGIF) manages most of our trout streams as “Put and Take” fisheries, that is, they are stocked with catchable sized trout one day, and taken out the next by the numerous Redneck Fishermen that  inhabit our state. They don’t seem to realize that such management practices provide but a few days of trout fishing annually.

Let’s start at the beginning, and explore why trout stocking was started, and what we have learned over the last one-hundred and sixty years about the effects that stocking has upon our trout streams.

I don’t think it’s any secret that there were two major forces that led to stocking. The first was over-harvesting. During the late 1800’s, there was a sharp increase in fishermen, especially in the Northeast, where fly fishing literally exploded. I’m sure that you have seen photos from that era, with each fisherman holding a stringer of twenty or thirty trout. There was no limit on harvest, and these Catskill fishermen proudly demonstrated that the Redneck Way of Fishing was not confined to states south of the Mason-Dixon Line.

The other factor was of course degradation of the watersheds. There were a number of contributors to this. The mountains were denuded by logging, which led to erosion of the mountainsides and siltation of the watersheds, smothering trout reds, as well as the invertebrate foodstuffs that trout feed upon. Industrialization led to the growth of manufacturers, mines and tanneries, all of which dumped their acidic, toxic effluents into nearby streams. Small wonder that the native brook trout populations plummeted.

Deprived of a favored pastime, privileged New England/New York fly fishermen pressed for a solution, which resulted in the creation of the US Fish Commission in 1872. The commission was charged with researching the decline of food fishes in the seacoasts and lakes of the US, and to remedy the situation. Rather than addressing the causes, they quickly came to the conclusion that the remedy would be creation of hatcheries with stocking of fish-depleted waters. West coast fish, Pacific salmon and rainbow trout, were introduced to the east coast, east coast fish, shad, Atlantic salmon and brook trout, were introduced to the west coast, and non-native fish, carp and brown trout, were introduced to both coasts.

Stocking practices continued unabated for a hundred years, until 1974, when Montana became the first state to ban stocking in streams that supported wild trout populations. The research that led to that decision was reviewed last year in their state publication, “Montana Outdoors“, and featured in an article in the winter 2015 edition of “The Flyfishing & Tying Journal“. Briefly, Dick Vincent, who worked for the Montana Fish and Game Department, helped develop electroshocking techniques which provided an accurate means to determine and follow fish populations. He began to study the Madison River in 1967, and found disparate populations of trout which he could not explain by water flow and habitat health. He then proposed a study to evaluate the effects of stocking. A stretch of the Madison currently being stocked would not be stocked for three years, a tributary that had never been stocked would be stocked for three years, and a section of the Madison that was not being stocked would be left unchanged, serving as a control. Fishing practices and regulations were left unchanged.

As a result of this study, the Montana Fish and Game Department stopped stocking all streams that supported wild trout. They continued to monitor the impact of this change in stream management, and found that the study results accurately predicted the negative impact of stocking on other monitored streams. For example, in the Gallatin River above Big Sky, the trout population increased from 450 fish per mile to 2,500 fish per mile after the discontinuation of stocking.

Stocking has other effects on watersheds as well. In addition to the negative impact of stocking due to competition for food and predation of wild fish, the stocked fish may carry disease. Whirling disease, which decimated cutthroat and rainbow trout populations in the west by nearly 90% in the 1980’s & 90’s, was introduced into watersheds by the stocking of infected fish from hatcheries in Colorado. Streams still have not recovered from this, as the ratio of trout  species continues to slowly evolve.

Here in Virginia, we continue to rely heavily on stocking in an effort to provide a pleasurable experience for sports fishermen. Over 200 streams are stocked with catchable size trout, 3, 5, or 8 times yearly, with most being stocked either 5 or 8 times. All but fourteen of these are managed as “Put and Take” streams. Given that most of these fish are caught or dead within three days of stocking, this yields “pleasurable fishing” 15-24 days of the year. Once fished out, the streams are barren of trout, providing “unpleasant fishing” for 341-350 days of the year. I can’t help but ask if this is really the best way to maximize the trout fishing experience in Virginia’s trout streams.

Thirteen streams are managed as “Delayed Harvest” streams. The same stocking schedule is followed, but fish under certain sizes must be released unharmed until June 15, when all fish may be kept until stocking resumes in October. The operative logic here is that many, perhaps most, of the fish would perish over the warm, summer months, and might as well be harvested. However, several of these streams would “hold -over” at least some of the fish in all but our worst drought years, allowing them to grow larger, become more wily, and add to the fishing experience. More importantly, the death of fish and other organisms is part of the normal life cycle in healthy streams. At least 20% of the fish in an unmanaged stream die naturally every year, and their decomposing bodies provide nutrients to the stream and its macro and micro invertebrates. These in turn become foodstuff for trout and other fish. By removing all the stocked fish in these streams each year, we are essentially sterilizing them annually. Small wonder that they become barren, and “dependent” upon stocking.

VDGIF lists fifteen streams as “Catch and Release” (CR). However, thirteen of them are so designated because they flow through wildlife management areas, national parks, or  other jurisdictions that have control of their management. Just two streams, a half mile effluent from the Coursey Springs hatchery in Bath county and a similar stretch below the Buller Hatchery in Smyth county, are solely under their control and managed as CR. This stands in sharp contrast to the trends in neighboring states, where fishery divisions are gradually changing the management of their trout streams, increasing the miles of CR water, in an effort to provide better trout fishing all year long.

VDGIF is requesting public input regarding stocking and management of our trout streams. Current management is based on previous public input, which is said to favor the “Put and Take” stocking plan. If this does not reflect your view, I would encourage you to go to DGIF.Virginia.gov, and provide your perspective. It will take only a few minutes of your time, and your input is necessary if we hope to see any changes made in the management of our trout streams. Personally, I  would like to see fewer of the signs seen below- 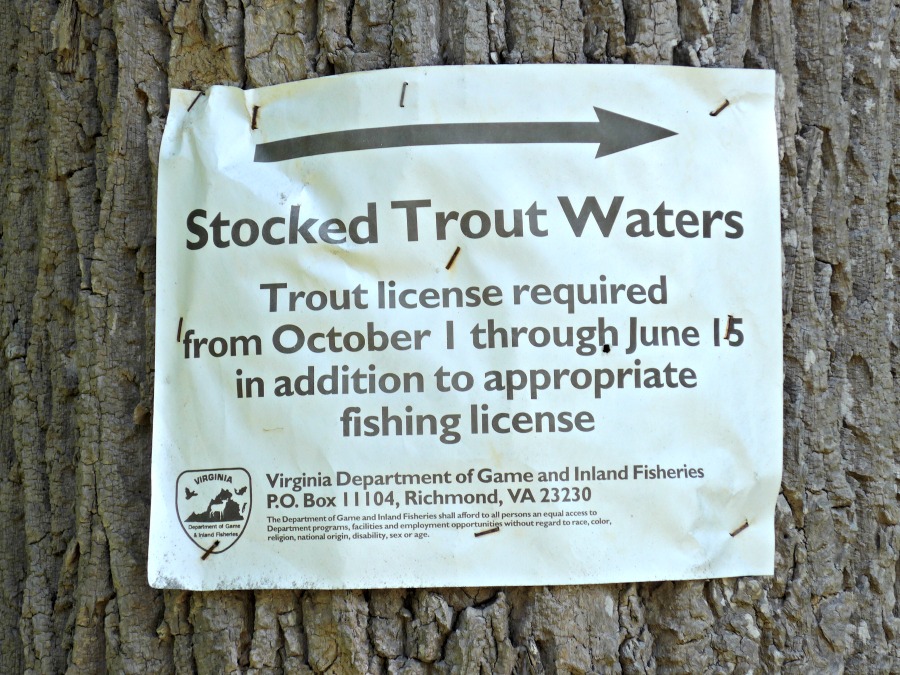 Learn about the different types of fly lines and h

Its that streamer time of year again! Al's latest