It’s winter, the first day of January, the first month of the year, and in Virginia, the coldest month of the year. For the trout fisherman, this presents a host of challenges. It can be cold and windy, and the riparian foliage is bare, offering little cover for stealth. In addition, the diminutive midge is the only reliable winter hatch. Fly fishing midges in winter requires both skill and patience. Indeed, winter fly fishers need to arrive streamside with their “A” game!

Midges are the most widespread of the aquatic insects. They are more tolerant of degraded water conditions than most aquatic insects. In addition, they thrive in waters with a muddy bottom and ample detritus, i.e. decaying organic material, upon which they feed. Because their requirements are so minimal, they are found in all water types, including stillwaters, tailwaters, spring creeks, and freestones. In freestones, they live in the eddies and other quiet areas.

Midges are “true bugs”, meaning they have three stages, larva, pupa and adult. They spend most of their lives as larva, burrowing about in the muddy bottom of their watery homes, eating detritus. There are many species and the length of their lifecycles vary. Thus, in addition to being present in most water types, some midges will pupate and hatch nearly every day of the year. In winter, when very few other bugs are available, they become the principle food source for trout, and the most reliable hatch for fly fishers to target.

The cartoon below illustrates the midge lifecycle, beginning with an adult midge dropping her eggs into the water. They settle to the bottom of the water column, where they hatch into larvae in a few weeks. Most species metamorphose into pupae in a few months, then rise to the water’s surface to fly away as winged adults. 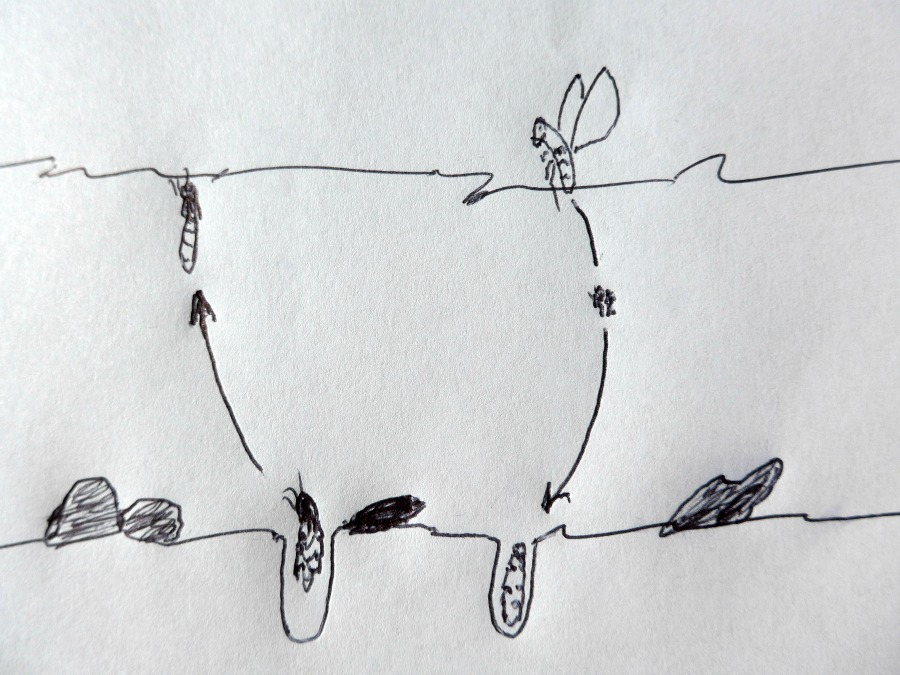 Below is a picture of a winged adult. 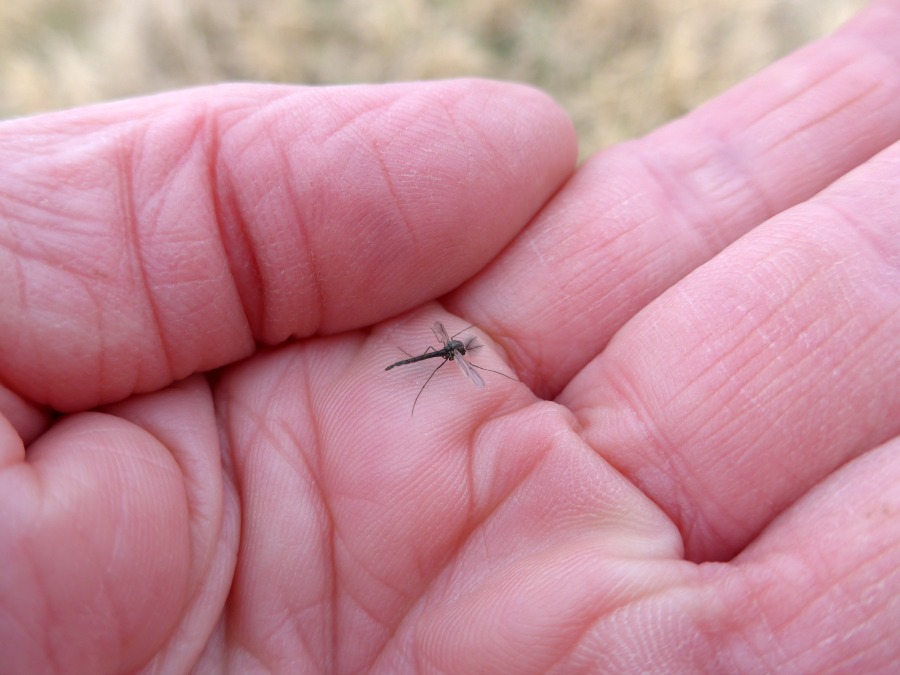 In the winter, midges generally hatch in good numbers twice daily. The first hatch occurs in the mid-morning, after the water has warmed a bit. The timing of this hatch will vary, dependent upon the degree of sunlight striking the water surface. The second hatch occurs in the evening, after the water has reached its peak temperature for the day. The evening hatch is generally a much larger hatch than the morning affair. Mating and egg laying occur at this time as well, affording a variety of feeding opportunities to the trout. 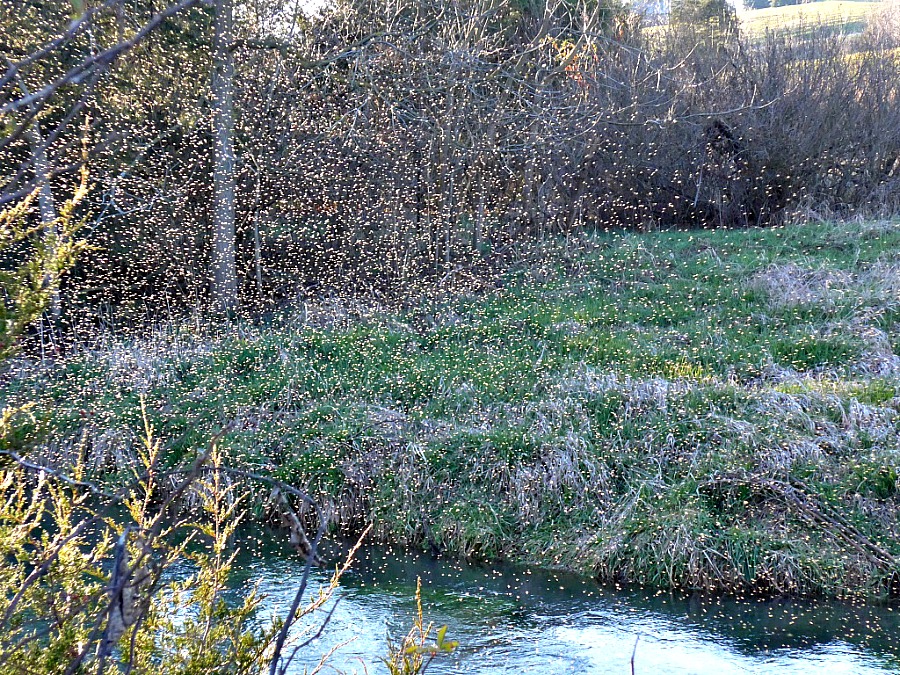 So let’s hit the water. Below is a winter streamscape of a Virginia freestone stream. The water is quiet on the surface, with a subtle but steady current. The stream bottom has some small gravel, but is mostly muddy. This is an ideal stretch of water for midges. 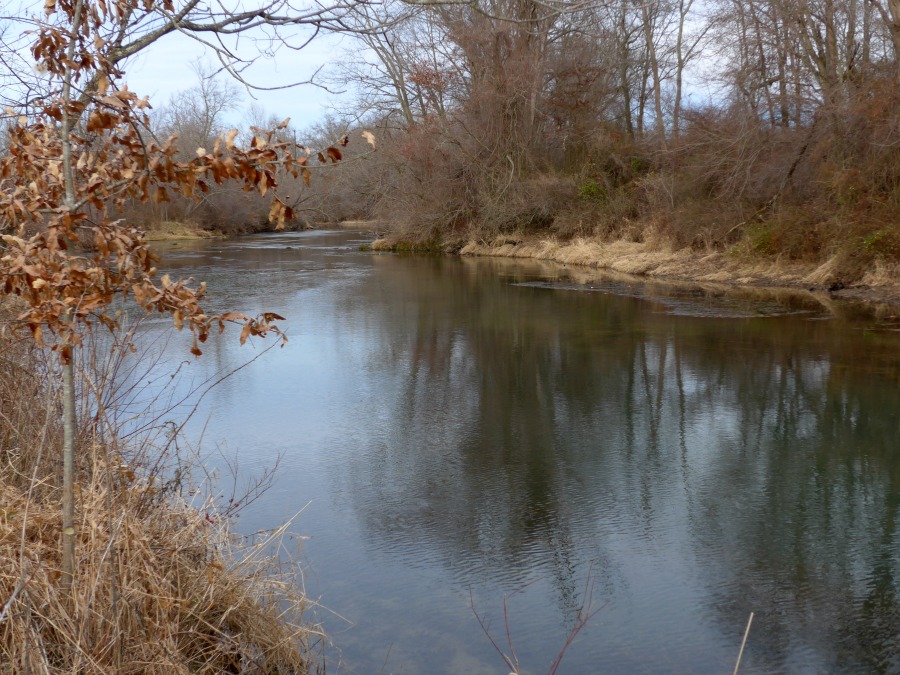 It’s overcast and there is no wind, but there is no discernible hatch nor evidence of surface feeding. That means it has to be fished “low and slow”. I think this is the most challenging way to midge fish, as it is difficult to get a long, deep drift. When done well, it’s easy to lose flies on logs, rocks and other structure on the stream bottom. I always bring plenty of extra flies if I anticipate fishing midge larvae!

If the stream is low, a foot or two deep, I use a floating line, but if deeper, I use a sinking tip line. Rather than attach lead to my leader, I use a tandem rig, with a small beadhead streamer and a midge larva pattern trailing it. I attach the trailer with 8-12 inches of 6X tippet, tied to the eye of the streamer.

I keep my midge patterns simple, with either a colored-wire abdomen and a beadhead, or a thread abdomen with wire ribbing and a beadhead. Generally I carry only two colors, gray and black, tied on #18-22 size hooks. Alternatively, a small San Juan worm can be used. Below is a picture of one of my midge larva patterns. 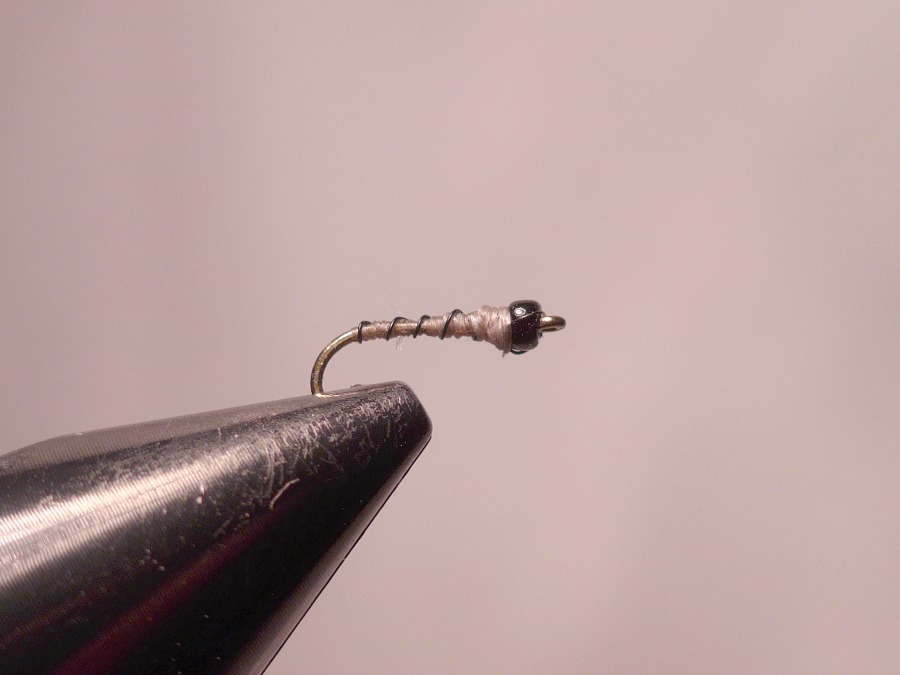 I cast a bit upstream, and throw a series of upstream mends to allow time for the flies to sink in the water column. Then I throw a downstream mend to begin my drift. The downstream mend will pull the leader and flies downstream with the current, keeping a tight connection to the flies. This is necessary in order to feel the take of a fish. The hook is best set with a downstream motion of the rod, while holding the line tight in the line hand. If one attempts to set the hook with an upstream motion of the rod, there will be a short period of slack, which often allows the fish to spit the hook.

The next photo, taken about an hour later, reveals that it’s time to change tactics- a riseform, at last! 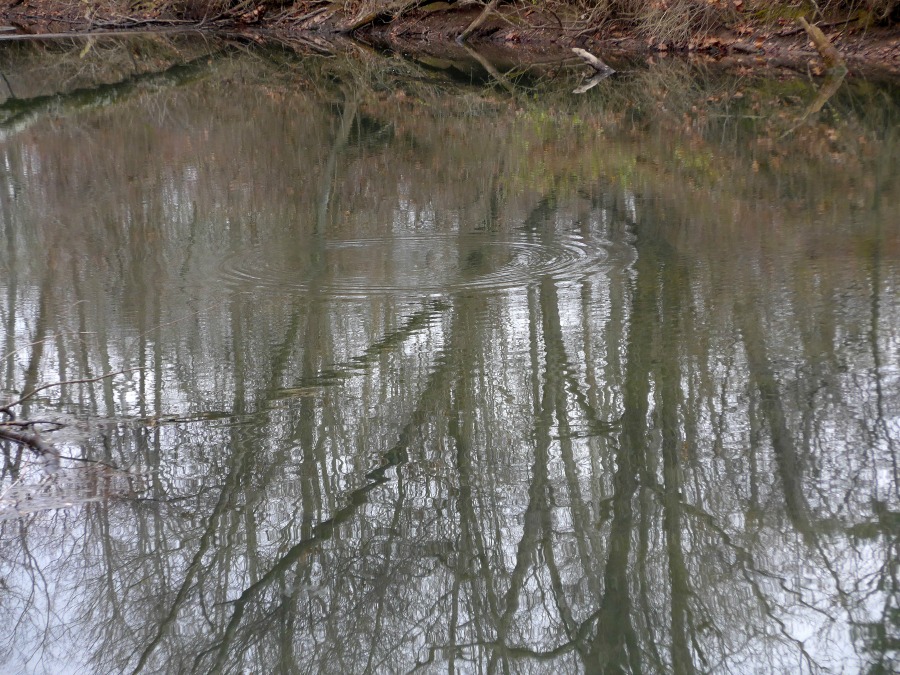 It’s often difficult to appreciate that a midge hatch is in progress, due both to their small size and their flight pattern. Most other aquatic bugs fly and swarm several feet above the water’s surface where they are readily seen. But midges frequently flit about only a few inches above the water’s surface. They may only be visible by  putting your face nearly into the water.

If I detect a fish’s head breaking the surface and causing a riseform, I will start with an adult midge pattern. I generally use a simple Adam’s pattern, with a brown or gold Z-lon trailing shuck. I will stay with this if the fish are taking it, but if not, I will quickly attach a trailing pupa pattern. I use 6-12 inches of tippet, tied to the bend of the adult fly pattern. This will keep the adult pattern in an upright position. 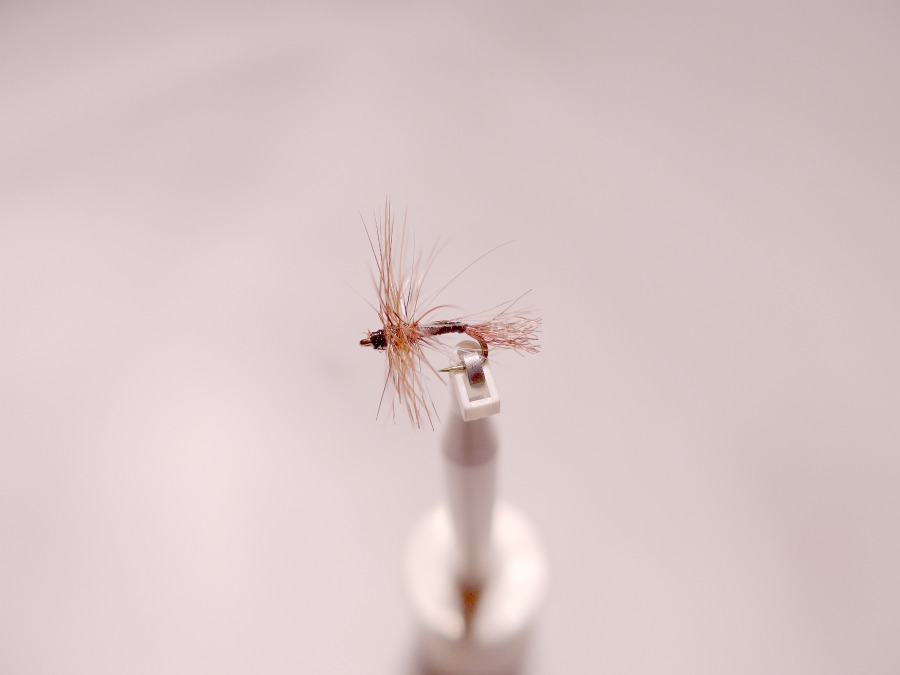 Due to their small size, midge pupae have difficulty breaking through the surface film. For every adult that emerges, there are many more pupae trapped below the surface film. They hang vertically, and look just like their cousin, the mosquito, whose larvae you may have observed in a bucket of water around your home in the summer. The trapped pupae are easy pickings for trout, who will always target them during a hatch. I usually start with a Quigley cripple pattern, which hangs vertically, closely imitating the trapped pupae. 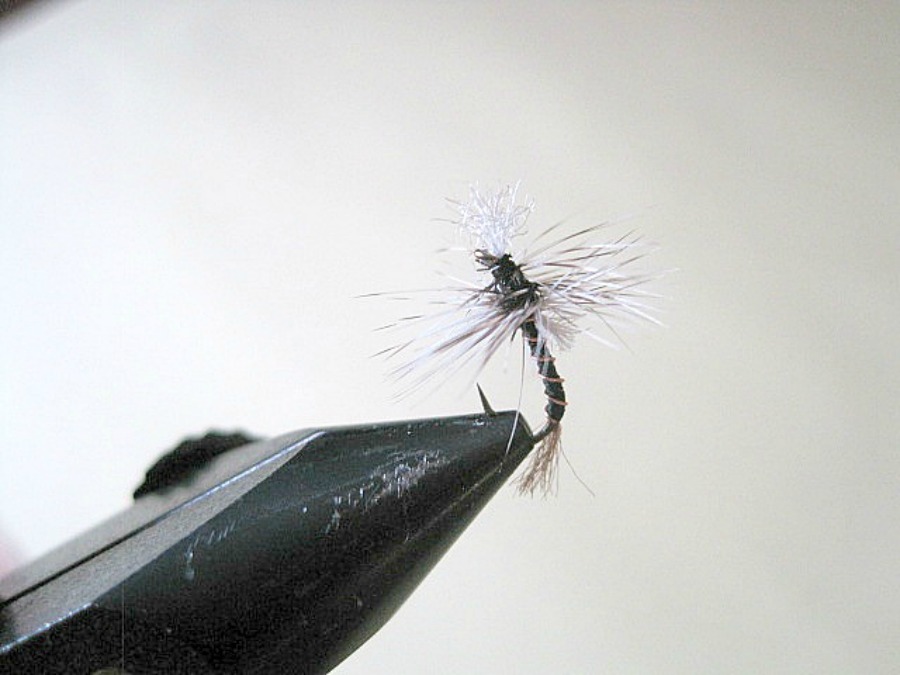 The evening hatch can be very heavy, and usually there is mating and egg laying occurring at this time as well. Clumps of bugs may accumulate on the water’s surface at such times. The venerable Griffith’s Gnat is a good pattern in this situation, as is the mating midge pattern, shown below. 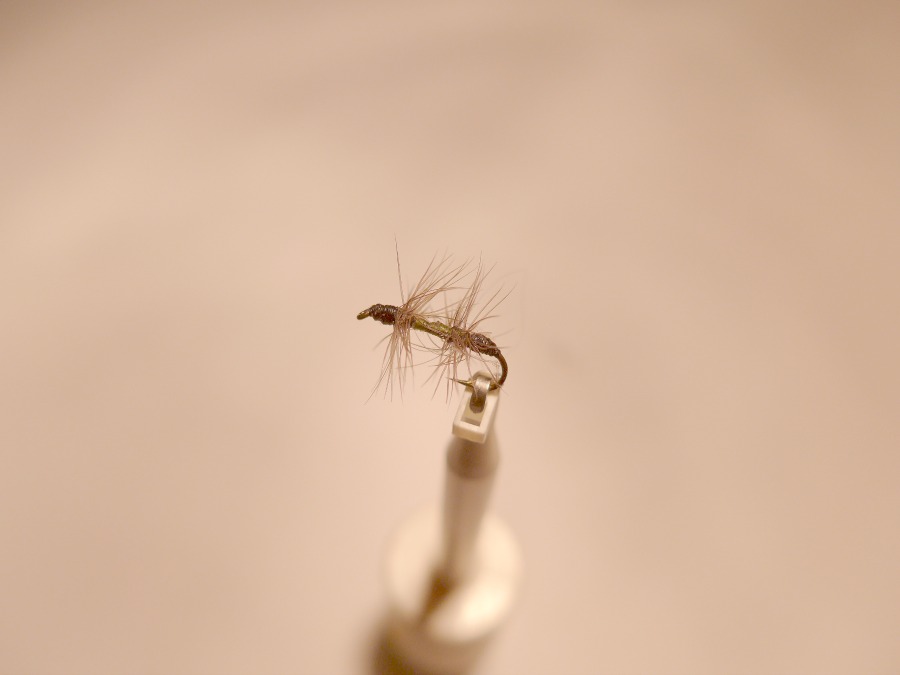 Spinner patterns can also be tried. When fishing such small patterns on the surface, I always use a tandem rig. It’s amazing how much easier it is to see a pair of these small flies on the water’s surface than a single fly. In addition, it affords the opportunity to fish two different patterns, presenting a broader menu choice to the frequently selective trout.

If one takes the time to locate good midge water, and learns how to fish the midge effectively, winter fly fishing for trout can be a lot of fun!