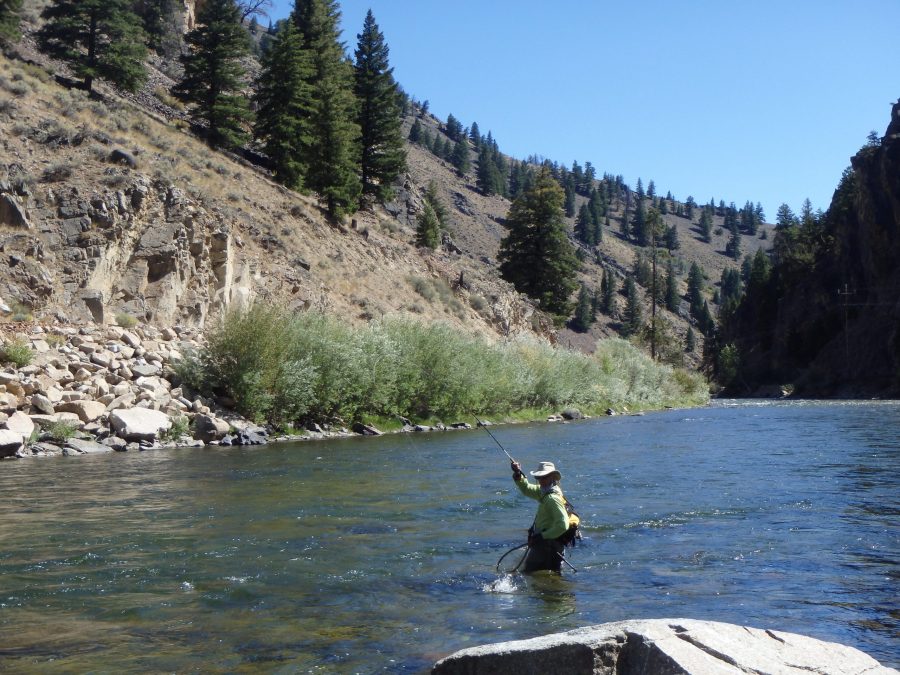 It is increasingly difficult to find solitude on many of our trout streams. When I began fly fishing 60 years ago, fly fishing was a little heard of sport, confined mostly to the northeastern and western portions of the country. Since then, fly fishing has become a wildly popular sport, pursued throughout the country. Have we inadvertently become part of the problem of falling fish counts in some of our most popular rivers?

According to an article in the “Montana Standard” (05/2021), in the years 2001-2019, angler days on the Bighole River increased from <30,000 to 90,000 per year. I cannot verify how this data is obtained, but it is likely based on bookings with guides & outfitters. This of course leaves out anglers who fish on their own, making the 90,000 angler days on this river an underestimate of the fishing pressure it faces.

Trout populations in many popular Montana streams are diminished. Especially hard hit are brown trout. In the Big Hole, brown trout now number ~400 fish/mile, the lowest in 50 years. The Ruby River has less than 600/mile, and the Jefferson less than 50/mile.

In a recent blog (Is Wade-fishing Harming the Madison River Fishery), I raised the question of whether wading, with its trampling of stream-bottom food sources and redds, may be contributing to reduced fish counts. Apparently Montana’s FWP concurs, as a major portion of the Big Hole River is now closed to fishing from November 1 through the 3rd Saturday of May, spanning the spawning periods of both brown and rainbow trout. If this proves to be an effective step, I’m sure that closures on other affected streams will follow.

But wading is only one manner in which anglers may be impacting fisheries. In wild fisheries that allow “Catch-and-Keep” (C&K) fishing, the “keep” or limit is carefully regulated. The number and size or age of  harvested fish is balanced with the number of fish a stream can support with natural reproduction.

In contrast, “Catch-and-Release” (C&R) fishing is not regulated. It is assumed that C&R fishing has little or no impact on the fish population. When first advocated by Lee Wulff in 1936, it probably didn’t. But now, with the increased fishing pressure observed, I personally wonder if that is no longer the case.

Based on studies utilizing best-practices by expert anglers, often in fishing tournaments, it is generally assumed that C&R fishing has a low incidental kill rate of 5-10%. But in general practice, I suspect that the actual kill rate is higher. Things like angler expertise, hook choice (single non-barbed vs. barbed or treble), net (rubber vs. plastic/cloth mesh), length of the play, water temperature, how released (in the water vs. out of the water), handled or not handled, and of course the commonly practiced “grip-and-grin” photos, all affect the mortality rate. In addition, there are no studies of C&R mortality if a fish is caught more than once in a season.

Most of us are reassured when our released fish swims away, that it has been caught and successfully returned to the stream for another day. In the studies referred to earlier, the fish were kept in tanks for a week after being caught. This revealed that most fish die 1-2 days after being caught and released. Thus our streamside experience is misleading regarding our practices and their impact on fish mortality.

If we couple the potential mortality with the unrestrained C&R practice of no-limit fishing, the probable number of fish incidentally killed is substantial. Using the lowest demonstrated mortality of 5%, if an angler catches 20 fish in a day, 1 of them will die. On the Big Hole, with 90,000 angler days, that’s an annual incidental kill-rate of 90,000 fish. In my mind, this raises the question of whether we C&R fly-fishers need to change our practice, i.e. be restrained as our C&K fishermen are.

In some European countries, flies with hooks are no longer permitted. The thought is that “the deception” of a trout with a fly is the epitome of fly fishing. This of course eliminates the  fight of the fish, which many of us, myself included, truly enjoy. There is also skill involved in landing a large fish. But this does eliminate the incidental kill from C&R fishing.

Other methods to reduce the impact of fishing could include licensure restrictions, the establishment of “refuge water” permanently closed to fishing to allow sanctuaries for spawning and growth, or shortened fishing seasons as is being tried on the Big Hole.

I’m not happy to consider advocating any of these changes, but I think it is likely that increased fishing pressure is having a negative impact on our fisheries. If wild trout fisheries are not to become a thing of the past, we have to keep open minds regarding the challenges they face, including not only climate change and habitat destruction, but our own fishing practices. If data establishes that I am part of the problem, I for one am willing to change my practices in order to preserve the fisheries and sport that I dearly love.

12 thoughts on “Are We Part of the Problem?”