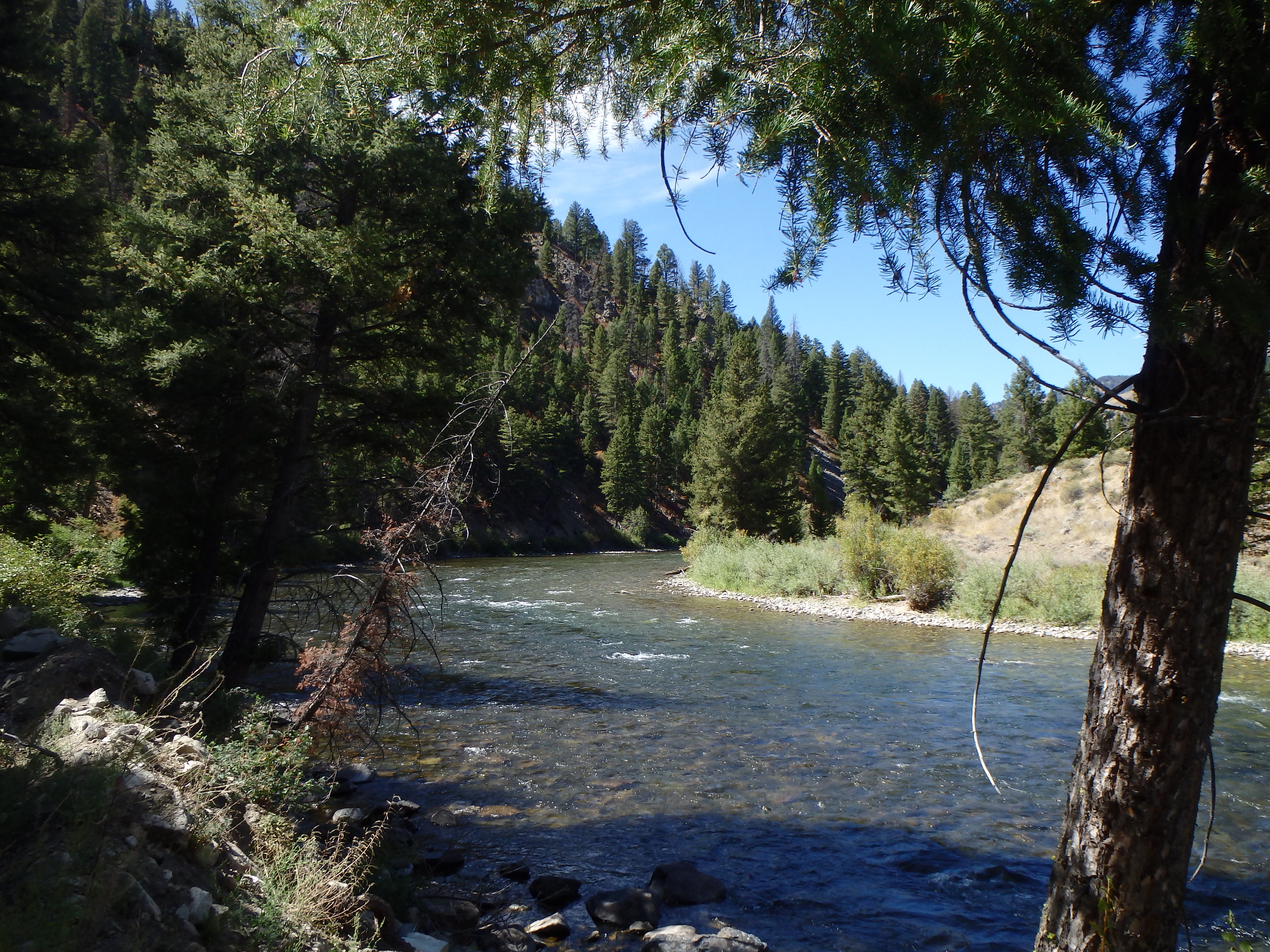 This August, fishing-buddy Reid and I chose to go fly fishing in Central Idaho. From our Montana base in Ennis, we drove west, through the Big Hole Valley, entering Idaho through the Chief Joseph Pass. It is a historical site, paying homage to the famous Nez Perce retreat to Canada. Once in Idaho, we drove south along the North Fork of the Salmon River. The river flows through a steep, narrow canyon. Pine and fir trees carpet the ridges. Unfortunately, due to the topography and posted private land, fishing access is poor.

Disappointed, we continued south to the first hub in the Salmon River Valley. Aptly named Salmon, it is a town of ~ 2,ooo people. A quick tour revealed that it is in moderate economic distress. Nonetheless, it still offers the basic necessities for outdoor recreation. We stopped at the Salmon River Flybox for some local advice. The word was to fish the Salmon River between Challis and Sunbeam. In addition, of the many tributaries, we were advised to fish the Lemhi River and Yankee Fork.

The Lemhi River joins the Salmon River just outside the town of Salmon. It is 60 miles in length, and is paralleled by a paved road throughout its length. The National Forest maintains frequent access  sites, most with camping facilities. Fortunately, the river frequently turns away from the road, providing a feeling of tranquility.

As you can see in the photo above, the Lemhi is a moderate-sized stream. But despite its size, it harbors many trout in the mid-teens. Nymphing the deep bends was very effective for both rainbows and cutthroats. Surprisingly, the cutthroat shunned our attractor and terrestrial dry flies.

After a day on the Lemhi, we headed for Yankee Fork. A gravel road follows it to its headwaters. The lower section, called the “dredge”, was heavily mined in the past, and piles of slag remain. Fortunately, a large restoration project is in progress.

The section immediately above the dredge has a fall/plunge-pool character. It is full of 10-12 inch trout, with some in the mid-teens. In this section, the species mix included both cutthroat and rainbows. As anticipated, the cutthroat mostly took attractor dry flies, while the rainbows preferred nymphs. Thus, a dry-dropper rig was very effective.

Farther upstream, the river changes character. The gradient is less, and the stream takes on the character of a meadow stream. It twists and turns, carving deep, undercut bends, which provide enticing holding water.

But to our surprise, despite the beautiful water, we found very few fish. However, what it lacked in numbers, it made up for in size. Most were in the mid-teens, and some boasted 20 inches. In addition to cutthroat and rainbows, we caught several bull trout as well.

Given the character of the stream, we were perplexed by the paucity of fish. In addition, the flyshop had directed us to this stream. But our conundrum was soon resolved when we bumped into a group of consultants to the Fish and Wildlife Department. They were mapping the river for continued study, and informed us that the fish population was unexpectedly low. Hence, the reason for their studies.

Gotta wonder why a local flyshop wouldn’t know or honestly reflect this!

Having fished two of its larger tributaries, we decided it was time to fish the mainstem Salmon. It was dubbed the “Salmon River” because it used to be choked with salmon. Of course that is no longer the case. Their nearly 1,ooo mile mile journey to spawn is interrupted by numerous dams on the Columbia and Snake Rivers.

The FWP consultants informed us that only 16 salmon made it to the Yankee Fork this year, a fraction of historical runs. Their absence has numerous effects upon the watershed, due mostly to the loss of nutrients from decaying carcasses. The number of aquatic insects and other foodstuffs is reduced, perhaps explaining the paucity of resident fish. Even riparian foliage is reduced. In an effort to mitigate these effects, FWP takes expired salmon from a nearby hatchery, and places them in the pools. There they gradually decay, and release their nutrients.

But it was September, and we were there to fish for trout, not salmon. The Salmon River is a big river. Due to the paucity of population centers and thirsty ranches, the river actually gets bigger as it flows downstream! This is a rarity in the arid, water-starved west.

The river is too deep and too fast to wade across. Fortunately, between Clayton and Sunbeam, there is a rough, gravel road on the opposite side from the highway. It provides access to wadable inside- bends and gravel bars. The water is crystal clear and cold, healthy enough for stoneflies.

We caught healthy, fat rainbows, mostly in the mid and upper teens. Whitefish were also present, some nearly 20 inches in length. Nymphs were again the ticket.

After a few days on the Salmon, we had to break camp and head home.

Reflecting on our trip, there is so much fly fishing in central Idaho, that we agreed a return trip is warranted. We didn’t have time to fish two major tributaries, the East Fork and Pahsimeroi Rivers, or to explore any of the many alpine lakes. So, if you like pristine water, with few anglers, and quiet camping, Central Idaho is a great destination!