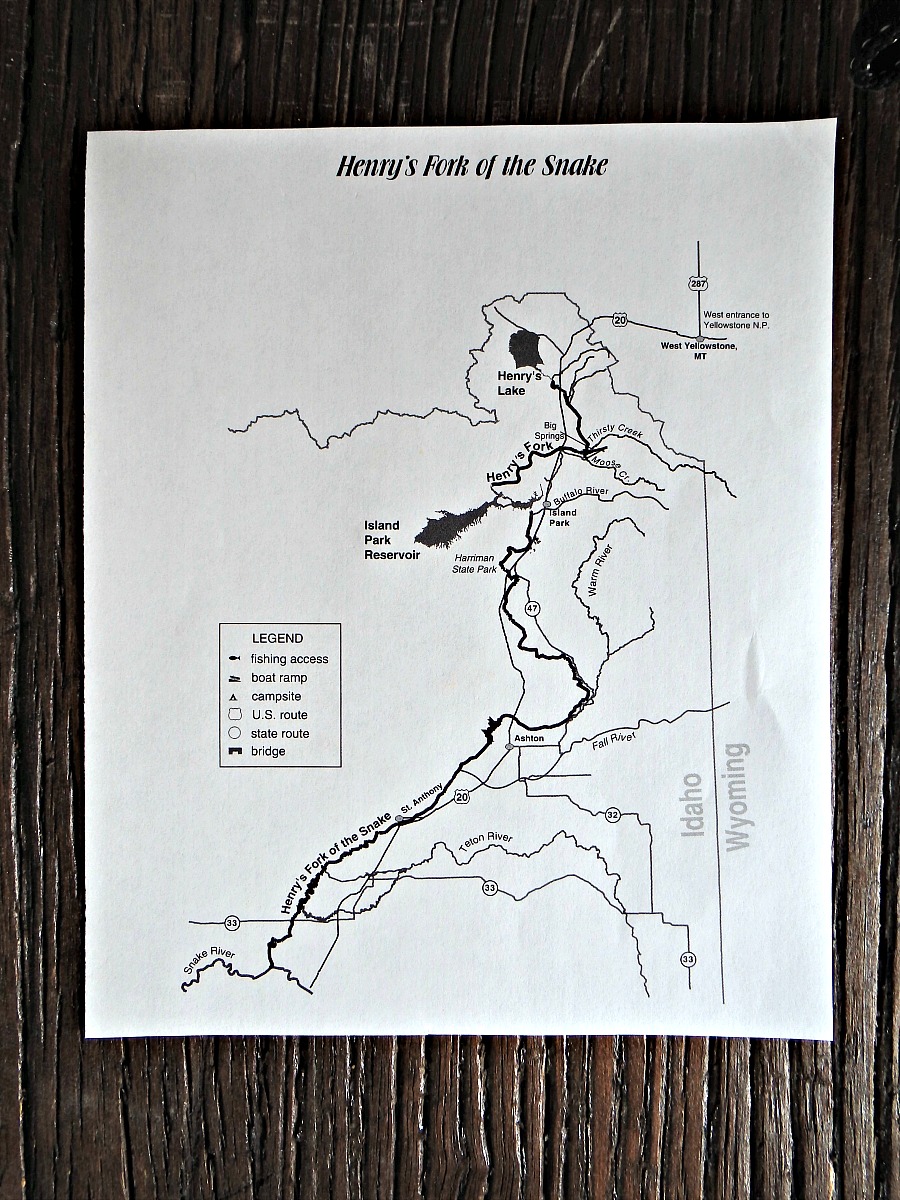 This summer, fishing buddy Reid and I planned a camping trip to include south central and southeast Idaho. But temperatures in the mid-nineties and forest fires in the central portion of the state led to a change of plans. We confined our trip to fly fishing southeast Idaho. The major fishery there is the Henry’s Fork and it’s tributaries.

We began our fishing in the upper Henry’s Fork, just below Big Springs. It’s a medium-sized spring creek there that meanders through grassy meadows. The water is crystal clear, and the stream bottom a fine gravel, ideal for wading.

Early morning featured PMD and caddis hatches, and we were able to fish to rising trout. Most of the fish were on the small side, twelve inches or less, but there was an occasional fish in the mid-teens. Unfortunately, by mid-morning we were interrupted by a new hatch, kayakers and tubers. A nearly continuos flow ensued, and we soon aborted our fishing. As our trip continued, it seemed that kayaking rather than fly fishing is now Idaho’s main sport!

Having beaten a retreat from the water-craft traffic, we went a bit farther downstream to the Upper Coffee Pot section. The stream there passes through a fairly tight canyon. Despite a faster flow, it was still readily waded.

We caught a bit of a late-morning caddis hatch. The fish, mostly rainbows, took both surface and subsurface flies. They were somewhat bigger, and more fish in the teens were put into the net. There was no boat traffic, either drift boats or kayaks.

After making camp at the Buffalo River campground, we headed for the famed “Ranch” section to catch the evening hatch. It was strange that no other anglers were there. But by evening’s end, I think we understood. Despite the nearby flyshops’ fishing reports of “hot fishing”, there was no significant evening hatch. Consequently, only a few small fish were rising.

This was a sharp contrast to my experience in the nineties. I fished the Ranch fairly frequently then. It reliably featured robust hatches and lots of rising fish. The greatest problem was finding a stretch of water that other anglers weren’t fishing.

We began the next day returning to the Upper Coffee Pot section, and again enjoyed good fishing. In the afternoon, we targeted another famous section, “the Box”. Flow in the Box is controlled by the Island Park dam. In summer, the flow is adjusted to support agricultural needs, and is generally high. In addition, the streambed is covered with large, sharp, volcanic rock. It is best fished by drift boat, however, we were wading. Our efforts put nothing in the net.

We were again struck by the absence of anglers. Only two drift boats went by over a period of several hours. But a small parade of other water-craft floated downriver. We were amazed at how much noise floaters make, banging their paddles and shouting to one another. They absolutely destroy any feeling of tranquility!

The next morning we fled to the Warm River, a major tributary of the Henry’s Fork. It’s billed as a stream loaded with small to medium fish, ideal for beginners. We were feeling crushed, and this seemed the ideal antidote.

Warm River is a medium to large stream. Its water is actually quite cold; not sure how it acquired its name. It has a gravel bed, and is a pleasure to wade. The fishing proved to be so-so. But at least we didn’t encounter any kayakers or tubers on the section upstream of the campground.

The Warm River campground was busy, but nice. There was a section for “tenters” such as us, and a section for “campers”. Facilities included well-kept latrines, potable water, picnic tables and fire rings with grills. The grounds were mowed, and bugs were not an issue.

We spent the afternoon searching for another venue, and settled on the Kirkham Bridge access on the Fall River. The Fall River is another large tributary of the Henry’s Fork. It has a steep gradient, and runs through a rocky canyon most of its length.

Early the following morning, we geared up at the access site. We crossed the bridge and followed a short but steep trail down to the water’s edge. The wading was difficult due to the gradient and the rocky streambed. The Fall River is billed as a wonderful trout stream, full of medium to large trout. We didn’t catch any large fish, but the fish we caught were surprisingly strong. This is often the case in faster moving streams.

Licking our wounds, we headed to a nearby town, Ashton, for lunch. After eating, we found a fly shop in town. I chuckled as I read the fishing report, “slow fishing on the Henry’s Fork”. Chatting with the owner, he ventured further that the Fall River hadn’t had big fish in the public sections for a number of years. He said it made him sad to provide such reports, but he wanted to be honest. If only others did the same!

It also makes me sad to write this blog about fly fishing southeast Idaho. I experienced wonderful fishing here twenty-some years ago, but in recent years it has declined. It clearly is not the fishery it once was. I would look elsewhere if heading out West in the near future to fly fish. Otherwise, bring a kayak or tube; you’ll fit right in!!