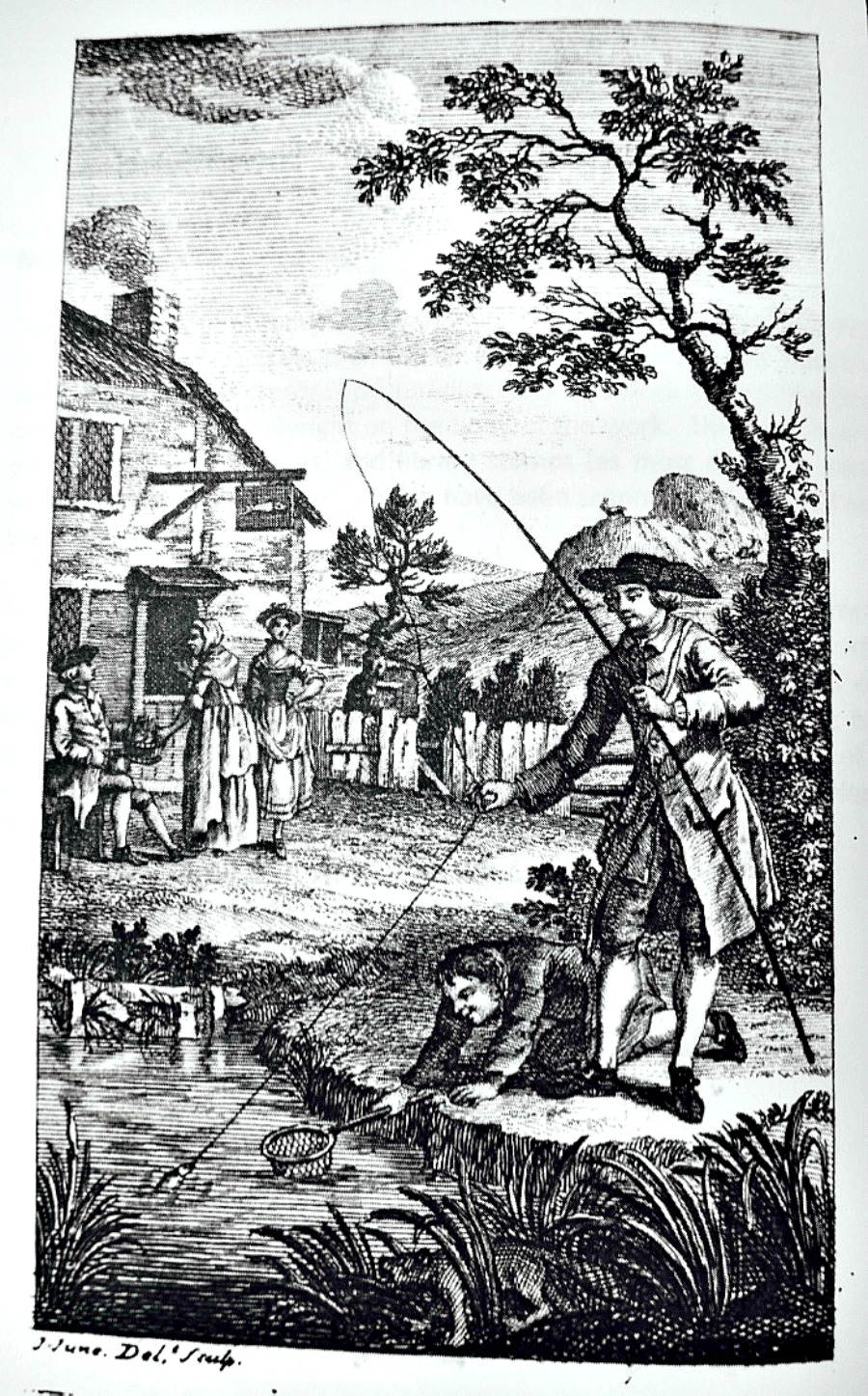 Like so many things in life, the ideal fly rod length has evolved not in a straight line, but rather, in a full circle. Today, the standard, or most commonly manufactured trout rod, is nine feet in length. Most manufacturers offer shorter rods for fishing small streams, and a few are beginning to offer longer rods as well. How did we reach this juncture, and is there an ideal fly rod length for trout fishing? In “Fly Fishing Tactics- Fly Rod Length”, I will review the evolution of the fly rod, and some of the technological advances that have led to the rods that we fish with today.

The first detailed account of the construction of a trout rod is found in “The Treatyse of Fysshynge Wyth an Angle”, published in 1496. It was only a chapter in “The Book of St. Albans”, but has become an iconic piece of the fly fishing literature.

“And how ye shall make your rodde crafty here I shall teche you. Ye shall kytte betwene Myghelmas & Candylmas a fayr staffe of a fadom and an half longe.”    circa 1496

The excerpt above from the “Treatise” refers to the base portion of the rod. A fathom is approximately six feet in length. Thus the base was to be nine feet long. The directions continue, and describe the construction of mid and tip sections, each half the length of the base. The mid-section telescoped out from the hollowed base, much like today’s Tenkara rods, while the tip was spliced to the mid-section. Each was secured with twine wraps. Thus the fully assembled rod was nearly eighteen feet in length.

These long, wooden rods did not cast easily. In fact, the caster aligned himself with the wind at his back, which assisted the forward cast. A braided, horse-tail line was attached to the tip of the rod. It was typically one to one-and-a-half times the length of the rod. Thus the fly rod length determined how long a cast could be made, and the stream-size that could be effectively fished.

The next serious discussion of fly rods is found in the “The Universal Angler”, published nearly two-hundred years later, in 1676. This edition of Izaak Walton’s “Compleat Angler” included a section on fly fishing, written by Charles Cotton. The following is his reference to fly rod length.

“For the length of your rod you are always to be governed by the breadth of the river you shall choose to angle at; and for a trout river, one of five or six yards long is commonly enough, and longer it ought not to be, if you intend to fish at ease, and if otherwise, where lies the sport?”

You can appreciate that very little change had occurred in the nearly two centuries following the publication of “The Treatise”. The rods were still very long, made of solid wood, and fished with a short piece of line attached to the tip. Due to their heavy weight, “an ounce per foot”, they were cast with two hands.

The next two centuries witnessed significant advances, and the emergence of the prototype of the modern fly rod. Bamboo replaced wood as the  primary rod-building material. The bamboo was split into four or six strips, then glued together. Ferrules replaced splicing, making rods easier to assemble and disassemble. “Winders” and guides were developed, allowing the use of longer lines, and longer casts. The new rods were shorter, and cast with a single hand. Fish, previously hand-hauled to the net, as seen above, could now be played from the “winder” or reel, and landed using the rod.

In 1913, Frederick Halford summarized the state of fly rod length- “Since those days (1888) the double-handed rod has disappeared, and the single-handed one, with a length of 9 ft. as a minimum and 10 ft. 6 in. as a maximum, is  nowadays recommended by all modern authorities.”

I found the development of the standard 3-section rod rather interesting. In Victorian England, most fly fishers lived in cities, and traveled by train to the countryside for their fishing pleasure. Again from Halford- “The two-jointed rod is in practice quite handy –. It is , however, overlong for the rack of a railway carriage unless the passenger has one side of the compartment to himself, so that, as a general rule, rods in three pieces are preferred nowadays.”

Since Halford’s time, manufacturers’ have continued to address the needs of traveling anglers. Most rods now have four sections, which allows them to easily fit into the overhead bins of airplanes. A few have even more sections, and fit into a briefcase.

During most of the twentieth century, the standard  trout rod was nine feet in length, with three or four sections. This was challenged by some anglers, perhaps most forcefully by Lee Wulff. He was the originator of the fly fisher’s vest, the Wulff series of dry flies, the triangle tapered fly line, and the maxim, “A sport-fish is too valuable to be caught only once”. Hence, his opinion carried significant weight. He favored short rods, often only six to seven feet in length. In 1986, he wrote the following regarding short rods-

“With the short, light rod you gain in the lightness of the outfit you must hold up in your arm all during the casting hours. You gain in the use of speed to develop line energy. Larger strokes and speed can be less tiring than short strokes with more power. Playing fish close in is easier and they can be brought to within easy reach of the fisherman.”

In more recent years, fly fishers have pushed the fly fishing envelope, pursuing Pacific salmon, steelhead, and a variety of saltwater species. The pursuit of these fish requires long casts, often in very windy conditions. As a result, we have seen the return of long, two-handed spey rods, and the emergence of intermediate-length switch rods, cast with either one or two hands.

With new resins, graphite, and additional light-weight materials like boron, single-handed rods now weigh only two-three ounces. This has enabled the production of longer rods, light enough to be comfortably cast with one hand. Thus, manufacturers now offer rods ten to eleven feet in length in lower line-weights, appropriate for trout fishing.

So, what if any are the advantages of a rod longer than nine feet? The first thing I noticed is the added distance they comfortably cast. In my hands, they cast distances to be expected of a rod 1-2 weights heavier. That is, a ten foot, 5-weight rod can easily generate the force and casting distance of a nine foot 6-weight rod. This allows me to fish large streams with lighter, stealthier lines.

In addition to the ease of longer overhead casts, more line can be lifted from the water to initiate a cast or make a mend. When fishing highly technical spring creeks, the greater reach facilitates fishing with more line lifted off the water’s surface, avoiding tricky cross-currents. I also find it easier to roll cast with the longer rods. Lastly,the additional length keeps the line higher in the air while casting, eluding those pesky, fly-eating bushes lurking behind the caster!

I have noted only two disadvantages of longer rods. One was referred to by Lee Wulff. A heavy fish cannot be brought as close to the fly fisher to land it without producing a candy-cane bend on the tip of the rod. Such a bend may break the tip. This can be prevented by holding the rod above the handle, effectively shortening it while landing a fish. Otherwise, a long-handled net can be used.

The other difficulty is encountered when walking through heavy, streamside brush. It’s simply more difficult to weave it through the brush than a shorter rod.

So what is the ideal length of thy trout rod? I think it is mostly dependent upon the size of the water being fished, and the tactics employed. But for all except the smallest, most heavily thicketed streams, I now use a ten or eleven foot rod, designed for single-hand casting.

If you haven’t already tried a longer rod, I would encourage you to do so.