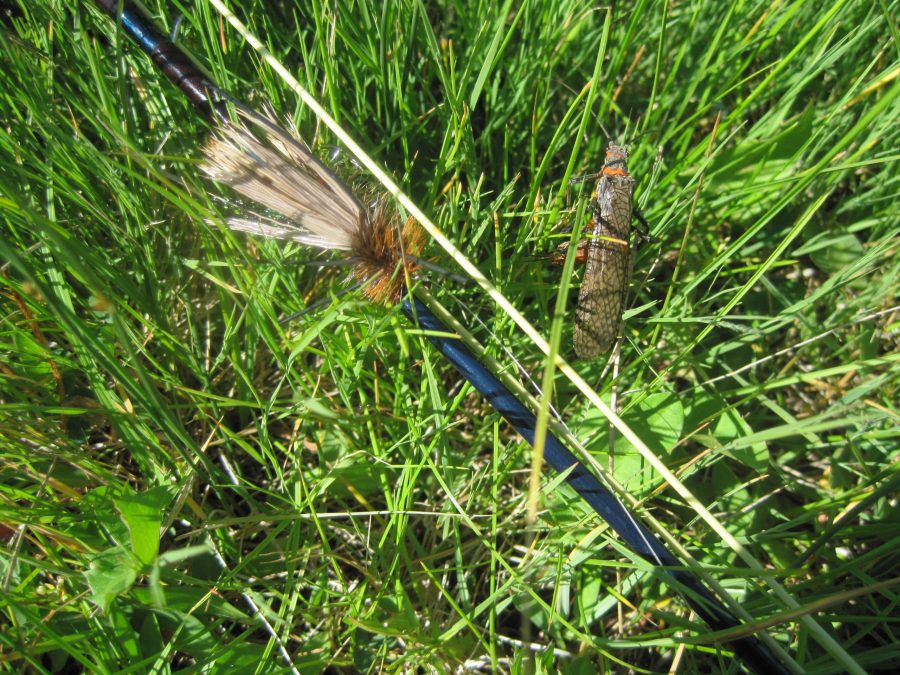 The salmon fly hatch is surely one of the West’s most famous and sought after hatches. Anglers from around the globe flock to the few streams hosting them to try fly fishing the salmon fly hatch. Ravenous, half-starved fish and big bugs; nirvana to the angler. But it’s a tricky hatch, to both time and fish.

The hatch begins shortly after run-off, and the water has warmed to the mid 50’s. This presents the first problem for an angler planning a week of fishing the hatch. Run-off is difficult to predict. It is dependent upon the depth of mountain snowpack, spring rains, and the arrival of temperatures warm enough to melt the snowpack. In Montana, this has in recent years occurred during the first few weeks of May, ending by the 3rd or 4th week. In Wyoming, where elevations are greater, run-off often lasts into mid-July. Thus, homework and a bit of luck are needed to catch this hatch.

As water moves downstream from its  cool headwaters, it gradually warms. Thus the  hatch generally begins in the lower sections of a stream first. Hatching takes place for a day or two, then moves upstream a few miles to the next section of warmed water. This “here today gone tomorrow” pattern continues until the headwaters of the stream are reached. The duration of the hatch is thus dependent upon how quickly the stream warms, and the length of the stream.

Salmon fly nymphs live 3-4 years before reaching maturity. Because of their multiyear life cycle, nymphs of varying size are present all year long. They require clean, cold, well oxygenated water to thrive. Hence, their presence in only a few of our trout streams. They are the “canaries” of our watersheds.

When they have reached maturity, salmon fly nymphs migrate from the deep center-water to the edge of the stream. There they crawl onto rocks or logs and emerge from their exoskeletons. They then climb into the streamside brush.

They mate in the brush, and the females return to oviposit on the surface of the water. Ovipositing females are so clumsy they resemble out of control motor boats, drawing the attention of nearby fish.

In addition to their large size, 2-3″, salmon fly adults are extremely nutritious. Trout gorge themselves, gaining perhaps 30% of their seasonal weight gain during this single hatch. After their gorge, it is a few days before they feed again. Thus, it’s best to fish a stream a bit ahead of the hatch and during the hatch, but not right after the hatch.

There are basically two major ways to fish the hatch, surface or subsurface. Let’s first look at the surface approach.

Salmon flies are weak, clumsy, and poor fliers. While resting or mating in the riparian foliage, some lose their grip and fall into the water, where they are trapped. Trout often wait under the foliage for these hapless bugs. To fish them, I position myself near the center of the stream, and cast toward the bank. If there are openings in the brush, I cast my fly into them, close to the bank, and allow the fly to then drift under the outstretched branches. If there are few or no openings, I use a sidearm cast, aiming about a foot outside the brush. Big buoyant flies thus delivered bounce a few inches above the water surface, and continue another foot or two, under the branches. This is a good technique when fishing the banks with terrestrials. Some flies will be lost in the branches, but most will reach the desired drift line.

Another surface technique is to imitate the ovipositing females. I like to use a fly with a bushy, heavily hackled thorax. This allows me to skitter the fly about the surface, imitating the behavior of the egg-laying females. Big fish often move more than a few feet to grab such a dinner.

Salmon fly nymphs cling to the streambed rocks, feeding on algae and other micronutrients. But sometimes they lose their grip, and get caught in the drift. Thus one approach to fishing nymph patterns is to dead drift them in the deep, cool riffles they occupy. Because of the water depth, weighted nymphs and/or sinking tip lines may be needed to reach them.

During a hatch, another productive technique is to fish from the bank, casting toward midstream. A slow twist retrieve nicely imitates the behavior of the migrating nymphs. If possible, bring the retrieve all the way to the stream’s edge, as trout often lie under the streamside brush waiting for them.

Fly fishing the salmon fly hatch is a challenge. But if you have the opportunity to fish it, catching some of the biggest trout of the year is your reward!