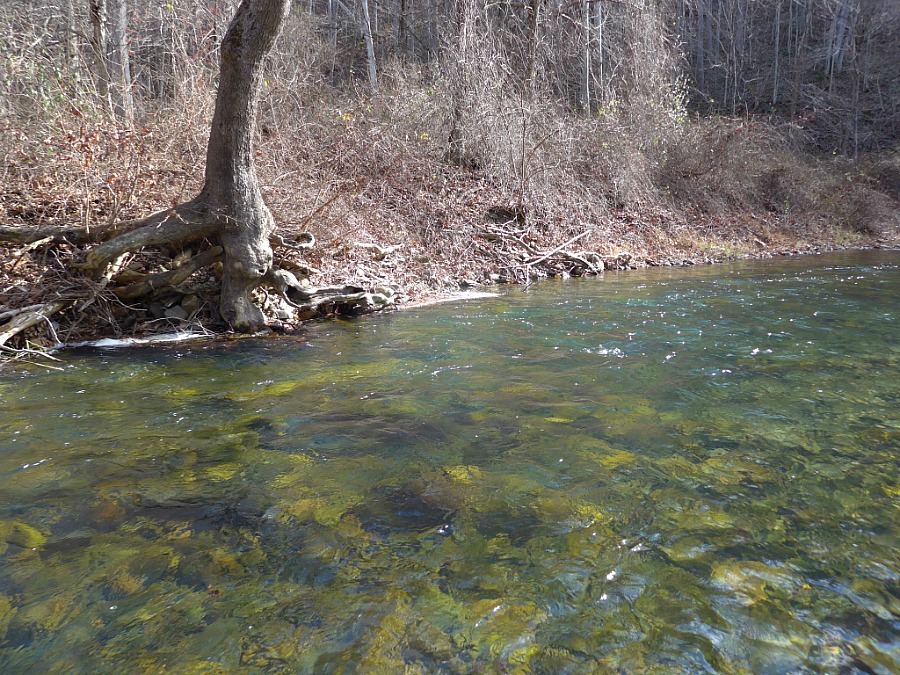 I prefer to use the inclusive term, “tightline nymphing”. It lumps Euro, Czech, Polish, Spanish, French, Hewitt, Brooks, and other variations of nymphing into one categorical technique. Each variation evolved to better fish stream conditions encountered in different locales. But each shares the goal to maintain a tight connection between angler and terminal fly.

In my view, the variations vary little from what we do when dry-fly fishing. When fishing the surface, we strive to remain “connected” to our fly. We use the shortest possible length of line and leader. Short leaders cast more easily, more accurately, and yield a more certain hook-set. Therefore, when fishing small streams, or turbid, roiled water, we keep our leaders short. But when fishing larger streams, or quiet, shallow, clear water, we lengthen our leaders to avoid spooking the fish. The same is true when tightline nymphing.

When tightline nymphing with floating lines, it’s all about the terminal tackle. This consists of a leader, a “sighter”, and a tippet. The sighter is a multi-colored length of mono positioned between the leader and the tippet. Most anglers fish with about 2-2 1/2 feet of sighter. It serves the same purpose as the strike indicator we use when suspension nymphing; it helps detect strikes. But sighters cast more easily than indicators, and are more stealthy.

The tippet length is adjusted such that it is a bit longer than the depth of the water. This helps maintain the desired tight connection between fly and angler while probing the bottom.

The leader length is the most variable. This is adjusted to allow the angler to fish without detection by the trout. Thus clear, quiet runs on medium-sized streams require longer leaders than small, rushing mountain streams.

When tightline nymphing with sinking-tip lines, a short leader/tippet is used, generally no more than 3-4 feet. No sighter is used.

When tightline nymphing, I fish tandem flies almost exclusively. My preference is to place the heavier fly on the point. I attach a lighter fly  “eye to eye” with a short piece of tippet, 6-10 inches. This keeps both flies near the stream bottom, and the lighter fly is able to move in a free, life-like, manner. Some anglers prefer the reverse, and place the lighter fly at the point.

An older approach is to place a heavy fly at point, then use tags to attach lighter flies. This requires the use of blood knots to attach pieces of tippet together, from sighter to point fly. Rather than trimming both tags of tippet, one is left several inches long and used to attach a fly. This is a popular method when fishing three or more nymphs.

The newest approach is to use a tippet ring. It is tied either to the end of the sighter, or to a short piece of tippet from sighter to ring. Two different lengths of tippet are tied to the ring, with a fly attached to each. To my surprise, they do not tangle very often. My preference is to attach the heavier fly to the longer piece of tippet. In my experience, doing the reverse, tying the lighter fly to the longer tippet piece, allows more slack, and more missed strikes.

For my point fly, I like to use a somewhat larger, weighted fly. My favorite is a wooly bugger, usually size #10-12. I tie them with either one bead in the head position, or two beads, one in both head and thorax positions. If a stream is healthy enough to host stoneflies,  I often use rubber legged patterns, with either beads or lead wraps for weight.

For the lighter fly, I use generic patterns like Copper Johns with brown or olive wire abdomens, hare’s ears, prince nymphs, or soft hackles. During spring and summer, nymphs have reached maturity and, I use sizes #14-16. In the fall, nymphs are beginning their lifecycle, and I use smaller sizes, #18-20.

In faster water, more weight is sometimes necessary to get the flies to the stream-bottom. Most anglers pinch a split-shot to the tippet for this purpose.

Casting and Presentation with Floating Lines

In small to medium-sized streams ideal for tightline nymphing, it is usually necessary to fish upstream to avoid detection. Casts are quartered upstream, fishing the closest water first. Subsequent casts gradually work their way farther across the water.

Once a cast is completed and the flies descended into the water column, the rod tip is held aloft. The leader is kept above the water surface, just like “high-sticking” with dry flies. Ideally, the sighter is positioned just above or slightly submerged in the water.

Because the leader is kept aloft from the surface, unnatural dragging of the flies is minimal. The drift is controlled by leading the flies with the rod. As water depth varies, the flies are allowed to sink deeper, or brought upward toward the surface as needed. The ability to adjust the depth of the flies during a drift is one of the greatest strengths of tightline nymphing.

The drift is complete when the flies have reached a point across from the angler. Continuing the drift farther downstream is generally fruitless, as the angler is visible to the fish, or the water has just been fished.

When tightline nymphing with a floating line, very little line is extended beyond the rod tip. This allows the entire leader and line to be lifted off the water. The longer the leader, the less line that is outside the rod tip. In fact, sometimes there is no line outside the rod tip. With little or no line extended from the rod, the rod tip must be soft and flexible in order to load and cast.

Holding the rod aloft all day is quite fatiguing. But a properly balanced outfit reduces the strain. Ideally, the rod/reel is balanced near the front of the grip. With longer rods, this requires a heavier reel than is generally manufactured today. But some of the older, heavier reels do the trick!

Lastly, even with only a little line extended, the line is heavy enough to sag and introduce slack when held aloft. Thus line manufacturers now offer tactical nymphing lines that are nearly weightless. They come in only one weight, matched for rod weights 2-5.  see-https://amzn.to/2Lz1DnN     https://amzn.to/2LusfGB

When fishing large streams, or as water depth approaches 3-4 feet, I reach for my sinking-tip lines. Even long rods can only keep 15-20 feet of floating line/leader off the water surface. Thus, larger streams require a different approach. In addition, sinking-tip lines get the flies down to the stream bottom without resorting to a lot of weight in the flies. Therefore, the flies remain more lively and life-like.

To minimize slack, I use only about 2 1/2 feet of tippet to my first fly. I like to rig my flies with the heavier fly in the point position. The second fly is unweighted or minimally weighted. I tie them eye to eye, with 6-10 inches of tippet.

The streams best suited for using sinking-tip lines are generally large or deep enough to allow a downstream drift. Thus good drifts require both up- and downstream line management.

To begin a drift, I throw a quartering, upstream cast. A series of upstream mends holds the line in place while the flies sink in the water column. The time required depends upon the depth of the water, and the sink-rate of the line. I like to keep two lines with me, one that sinks 3-4 inches per second, and another that sinks 6 or more inches per second. Once I think the flies have reached the bottom, I follow the drift with the tip of my rod.

As the flies drift downstream of me, I continue to follow them with the rod-tip. When the drift is complete, I swing the flies to a position below, and let the flies rise to the surface. This is frequently a hotspot!

If two or three drifts have not produced a hit, I try raising the flies toward the surface several times during the downstream drift, i.e. Leisenring Lifts. If this also fails to produce hits, I throw more mends after the cast to allow the flies to sink deeper in the water column. I continue with this progression until I am hopelessly snagging the stream bottom.

The stream pictured above reveals all the features best fished with tightline nymphing. The water is quite clear, putting the angler at a disadvantage if fishing across or downstream. In addition, the clarity allows fish to readily see a line or strike indicator floating on the surface.

The varied colors of the water indicate numerous changes in water depth. Managing these changes during each drift keeps the flies where trout feed, near the bottom. Also seen is a stream bottom covered with many rocks. They provide cover and current-breaks. Tightline nymphing is the most efficient technique to fish them. Using the fly rod to steer the flies, each rock and hold is readily fished.

Lastly, the stream is modest in size. Hence, the entire stream is readily fished with the line and leader lifted off the water surface.

Pros and Cons of Tightline Nymphing

Tightline nymphing offers a number of distinct advantages over suspension nymphing. The ability to maneuver the flies during the drift is paramount in my mind. In addition, there is no need to adjust a strike indicator to fish different water depths.

Tightline nymphing is much more stealthy. There is no line, leader or indicator on the water surface for trout to see. And without a bulky indicator, casting is generally easier as well.

The major limitation with tightline nymphing using floating lines is the reach. This is not a technique for large rivers. But with the use of sinking/sinking-tip lines, the reach can be extended while retaining most of the advantages of tightline nymphing.

In summ, tightline nymphing is a time-tested technique that is well suited for many of our trout streams. It is a bit more difficult than suspension nymphing, but the rewards speak for themselves- a significant increase in the number of fish hooked. Any serious fly fisher should give tightline nymphing a try!

One thought on “Fly Fishing the Subsurface, Tightline Nymphing”