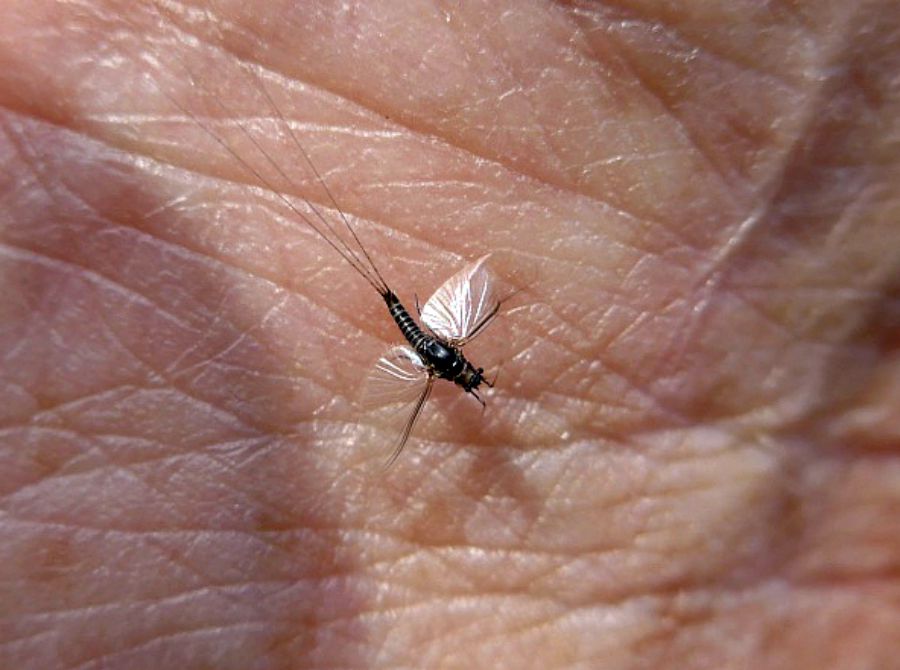 Fly fishers who live near a stream boasting tricos are indeed fortunate. The trico hatch is the longest lasting mayfly hatch, and one of the longest lasting hatches of any of the aquatic insects. They begin to hatch in early-summer, and continue to do so until the first fall frosts. It is also one of the  most reliable of the summer hatches, occurring nearly every day of the season. In “Fly Fishing Tricos – a Great Summer Hatch”, I will review the tricos’ lifecycle, its most vulnerable stages for feeding trout, imitative fly patterns and how to fish them.

Ticos, or Tricorythodes, are among the smallest of the mayflies. What they lack in size, they make up for in numbers. Trico hatches cloud the air, and their spinner falls can smother the water’s surface.

Unlike most mayflies, tricos emerge like lustful teenagers. During the hot summer months, male tricos hatch shortly before dawn. They molt into the spinner stage in an hour or two, then hover over the water, impatiently waiting for their mates. The females begin to hatch at sunrise. Rather than hiding in the bushes for a few days, sulking about what comes next, they join the swarming males and hop right to it! Therefore, clouds of mating tricos will be seen hovering over the water within an hour or two of sunrise . Mating is completed in short order, and spent spinners begin to fall onto the water’s surface within an hour.

As summer passes into fall and stream temperatures begin to cool, the trico hatch gradually occurs later in the morning.  That means that fly fishers can arrive streamside at mid-morning rather than at daybreak. Regardless of the season, the entire affair, from hatching to mating  and egg laying, lasts only 2-3 hours.

Tricos, like most of the smaller aquatic insects, inhabit spring creeks, tailwaters, and the slower sections of freestone streams. The nymphs are small, size 16-18. They are crawlers, inhabiting the silt, sand and fine gravel that is found on such streams’ bottoms. Because of this behavior, they are generally not available as food for trout until emergence. Consequently, I rarely fish with nymphs except during a hatch, at which time I may use an unweighted pattern as an emerger. I fish it with a dun or spinner pattern, attaching it to the hook bend with a bit of tippet, no more than 6-8 inches (see “Presentation- Fly Fishing Emergers“).

The emergence of the female duns usually triggers trout to start feeding on the surface, although not with great enthusiasm. This changes about an hour later, when the spinners begin to fall to the water’s surface. They are helpless and collect in slow eddies, where they are easy pickings for hungry trout.

Trout can usually be seen eagerly gorging themselves during the spinner fall. But despite their aggressive feeding, the spinner fall can be frustrating for the fly fisher. The trico spinner is very small, requiring size 20-26 hooks. While it’s always difficult to see flies this small, it can become almost impossible when fishing tricos due to the presence of so many naturals. I find it helpful to fish a pair of flies. It’s amazing how much easier it is to see two flies a foot apart than it is to see one fly. Another trick is to use an attractor or terrestrial fly as an indicator along with a trico spinner. Be ready to set the hook for any rise near the non-trico pattern.

Another problem is getting a trout to notice your fly, floating within the smorgasbord of food. This is one situation where a twitch of the fly rarely works, as the trout are feeding on lifeless flies, floating in the surface drift. Instead, I try to focus on one trout, determine its feeding rhythm, and present my fly when expecting the trout to rise. Sometimes it works, and sometimes I just have to take a deep breath and sigh! At such times I empathize with the British fly fishers, who refer to tricos as the “white curse”!

As shown above, spinners have long tails, three times the length of their bodies, and one pair of over-sized, glossy, clear wings that shimmer in the sunlight. When tying imitative flies, it has been my experience that the wing detail is more important than the tail detail. The picture above of a male trico spinner reveals that the wings have a broad base, and taper to rounded tips. In addition, they are translucent, with a few stiff veins. I think they are best imitated with a hackle-winged fly, the pattern on the left in the picture below. Wings tied with Z-lon, as seen with the other two patterns below, have a shape opposite the natural, with a narrow base and wide tip. In addition, most commercial flies tied with Z-lon have dense wings, and lack the transparency of the natural’s wings.

Earlier this summer, I was fishing a particularly frustrating spinner fall. None of my usual tactics were working. A fishing buddy, Kevin, was with me, and after a bit, he pulled out a fly that was new to me. He had found it at the Madison River Fishing Company in Ennis. It looked a bit like an old fashioned “peacock and partridge”. But instead of partridge, the hackle collar was bright white, and had much shorter fibers. He proceeded to catch a bunch of trout, so I tied up some that night. I have continued to fish it with good success.

I tie the new fly with peacock dubbing, and rib the abdomen with copper wire. The thorax is tied with peacock sparkle dubbing, which provides a bit of flash and a shaggy appearance. I use a small, black metal bead for the head, behind which I add two turns of short, white hackle. I’ve been tying it on a #20 hook.

I have mostly fished this fly as an emerger, tied off the bend of a small parachute Adams. It has been very productive during both the hatch  and the spinner fall. During the hatch, I have also fished it deeper in the water column, trailing it behind a small wooly bugger. It has proved to be very productive when fished in this fashion as well. I’m puzzled as to what it actually imitates, but suspect it may appear to be an emerging dun, a drowned dun or a cripple.

Sometimes, in the midst of a spinner fall, I have had the trout stop taking my trico patterns, while continuing to rise all about me. When this happens, I look very carefully for evidence of a second hatch in progress. Another mayfly, callibaetis, inhabit the same water-types as tricos, and hatch in the morning as well. Although far less numerous than the tricos, they do offer a bigger meal, size 14-16. If I spot any larger flies in the air, I’ll drop a callibaetis cripple off a small parachute Adams. This will usually put me back in the game.

The summer trico hatch is a great hatch for dry fly enthusiasts! However, it is not for the fly fisher who enjoys sleeping in and having a hearty breakfast with a large mug of coffee. It starts shortly after dawn and will be over by the time the coffee mug is emptied. Oh well, there’s always the early-fall hatch!

One thought on “Fly Fishing Tricos – a Great Summer Hatch”