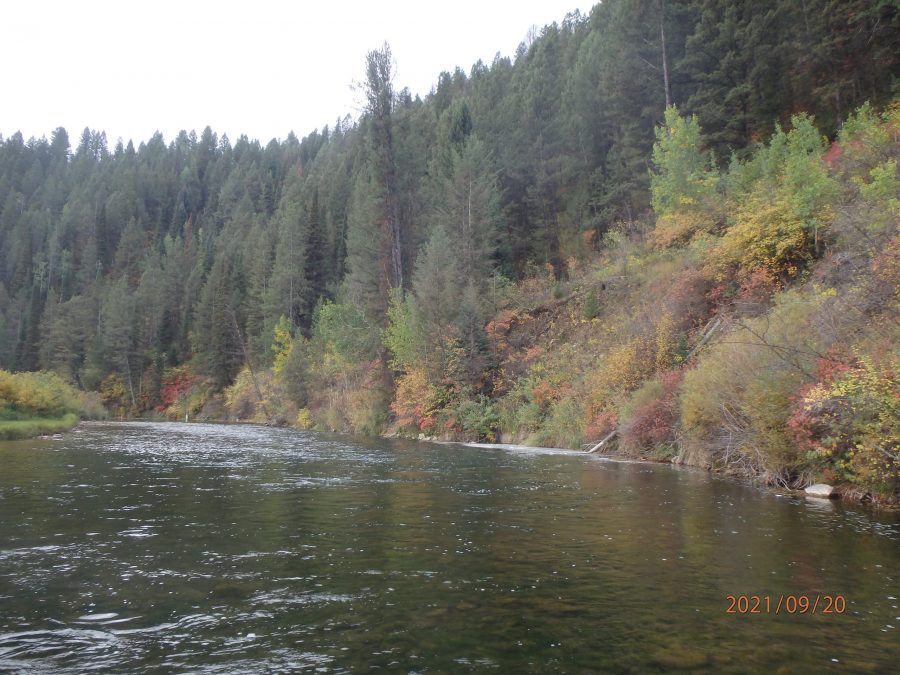 This summer, fishing buddy Reid and I decided to explore the waters of western Wyoming. We couldn’t go until late-September, and therefore knew that the fishing would be challenging. But before I get to the streams and the fishing, there are two things anyone interested in fishing Wyoming needs to understand: the unique regulations and the wind.

As settlers trudged their way to what became the Wyoming territory, they apparently forgot that we fought and won The Revolution to rid ourselves of British law. Thus, Wyoming landowners own the stream bottoms of any streams flowing through their lands. They don’t own the fish residing there, so fishing from a boat is allowed, but neither foot nor anchor can touch the stream bottom. So British!

Further complicating things is the fact that landowners do not need to post their property borders. It is the sportsmen’s responsibility to discern them! This is especially difficult in national forests, which are frequently dotted with legacy properties. Judging by saloon slogans like “I own a gun and a backhoe, so don’t trespass”, Wyomingites don’t  care much for trespassers, unintentional or not. So beware!

And then there is the wind. Montana is windy, but Wyoming is really windy! Good line-speed is essential for casting, but mending can be nearly impossible. When the line is lifted for a mend, crosswinds blow the line sideways. If the wind is blowing in the direction of the desired mend, it’s ok, but if blowing in the opposite direction, the mend is utterly defeated.

Despite these challenges, western Wyoming is blessed with many trout streams, most managed as wild fisheries, i.e., unstocked. With bent rods in our minds, we headed for our first destination, the Green River.

The green river is best known for its tailwater section in Utah. But it begins in the Wind River Mountains of Wyoming, flowing out of the Green River Lakes. Nearly sixty miles of stream run through public lands and are easily accessed. Our intent was to drive to the lakes, and pitch our tent in the national forest campground there. Although the “Flyfisher’s Guide to Wyoming” warned that the gravel road was poorly maintained, we were surprised at the severity of disrepair. Nearly constant washboard, interspersed with fields of potholes and protruding rocks, resulted in a bone-jarring ride. Rather than ruin my pickup, we turned into the first campground available.

Even near its headwaters, the Green River is a large stream.

The stream bottom consists mostly of gravel and small rocks, making wading fairly easy. And despite its size, there are enough shallow stretches that the river can usually be crossed when necessary. The water was cold and clear, and the frequent bends with deep runs just shouted “trout water”!

As it was late September, the water was crystal clear, a bit low, and there were no significant hatches. We mostly fished dry-droppers, or a tandem of nymphs or small streamers with a trailing nymph.

But alas, we were nearly skunked, a common occurrence according to camp talk. That night we nearly froze! We were camped at nearly 8,000 feet, and the temperature dropped into the 20’s. Our sleeping bags, rated to 32 degrees, were not sufficient. After a breakfast, eaten with shivering hands, we broke camp, and headed for destination #2.

The Greys River is one valley west of the Green River, running between the Wyoming Mountains to the east and the Salt Mountains to the west. It flows into the Snake River at the town of Alpine. A well maintained gravel road more or less parallels the river, providing good access to sixty miles of water, all within the Bridger National Forest. We found the campgrounds and pull-offs nearly filled with RV’s and tents, but oddly, we had the river virtually to ourselves. Unknown to us, it was opening week-end of elk season!

The river is about half the size of the Green River, and very wadable. There are meandering meadow sections and rushing canyon sections. The water was cold and clear. Despite its promising appearance, after two fishing sessions, we were still without a catch! So, we moved onto river #3.

The Salt River begins on the west side of the Salt Mountains, and runs through Star Valley for fifty miles, before emptying into the Palisades Reservoir. The lower 10 miles is stocked, but otherwise the stream is managed as a wild trout fishery. The valley is almost entirely private, but a number of public access sites are present due to the cooperation of landowners and the state. Fairly detailed maps are present at the sites, indicating the areas where landowner arrangements allow wading and bank travel. The stream is medium sized, and easily waded.

Despite inclement weather, ranging from sunshine to drizzle to sleet, always with strong winds, the fishing was good. No significant hatch occurred, so it was mostly nymphing. A nice mix of rainbows and browns in the mid-teens were brought to the net, interspersed with numerous, large whitefish.

Despite the good fishing, after fishing for two days, we felt that we had fished the available water, and that it was time to move on.

The last river we visited was the Gros Ventre, located about nine miles north of Jackson, in the Bridger-Teton National Forest. It begins in the Gros Ventre Mountains, and runs for about seventy-five miles before joining the Snake River. An asphalt turning to gravel road more or less parallels it, providing fairly easy access throughout, except where parcels of private property exist.

We drove about half way upstream, several miles above Lower Slide Lake, which was created by a landslide in 1925. The stream there was medium sized, and easily waded. The water was clear and cold, with many nice runs and deep bends. We spotted a few fish, but caught very few.

So, would I return to fish these streams, with so much fish’n and so little catch’n? Definitely! The watersheds looked healthy,  and should support a good population of trout. We encountered unstable weather, and typical, tough, fall conditions with low, clear water, and no significant hatches. I would expect much better fishing in the spring and early summer.