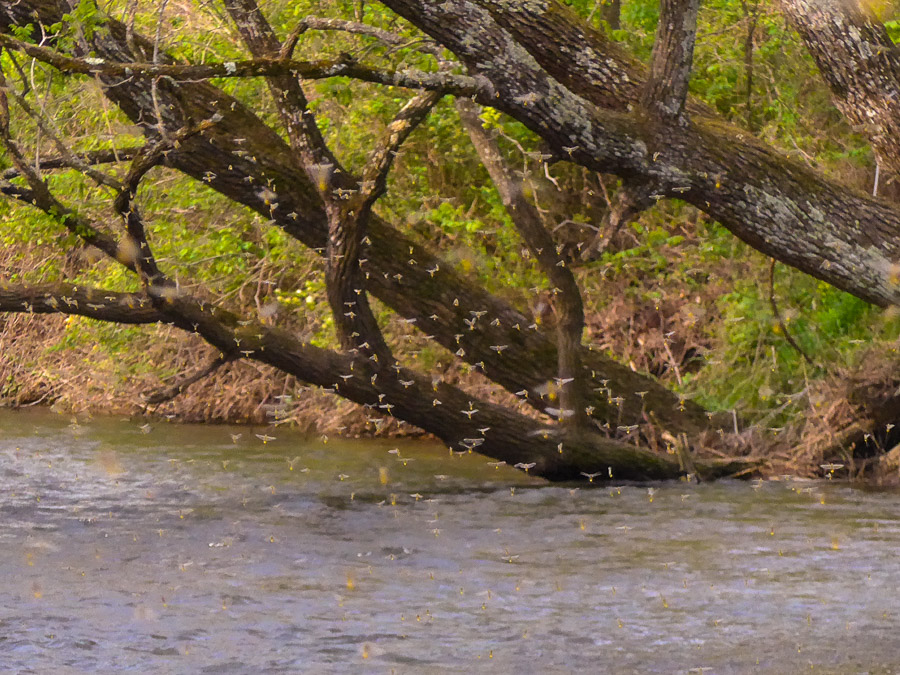 It is generally acknowledged that 80-90% of a trout’s diet consists of subsurface foodstuffs, mostly nymphs and larvae. Continuously present, we often conclude that trout steadily feed on them all day long. But nymphs’ colors camouflage them with the streambed and plants. In addition, they often feed or hide under streambed rocks. Larvae are even more elusive, burrowing into muddy streambeds (midges), or building cases about their bodies (caddis). Hence, while trout continuously search for them, they do not necessarily wind up in a trout’s gullet.

So how does that square with the observation that a trout’s diet is comprised mostly of nymphs and larvae? While difficult to find and root out much of the time, they become highly vulnerable during a hatch. Hence, trout leave their holding lies en masse during a hatch and gorge themselves. While anglers usually focus on the duns floating on the surface, trout, especially the big guys, focus on the nymphs and larvae (now pupae) below the surface.

I think it’s fair to say that when a hatch is on, most of us think DRY FLY. But Doug Swisher and Carl Richards (Emergers- https://amzn.to/34DVsoZ) made observations that should change our approach if we want to increase our catch-rate. They built special aquaria and populated them with nymphs and larvae. Thus they were able to watch and photograph them while hatching and swimming to the water’s surface. I think they made two game-changing observations.

The first was that many nymphs failed to reach the surface on their first try. When they stopped, they slowly sank to the bottom, rested a bit, and tried again. A nymph, moving slowly up and down in the middle of the water column, is extremely vulnerable to trout.

The second significant observation was that nymphs frequently failed to break through the surface film. Failure occurred approximately 50% of the time. Thus, during a hatch, the film holds at least as many nymphs 1-2″ below the surface as there are hatched duns on the surface.

Even after breaking through the surface, many mayfly duns fail to free themselves from their nymphal shucks. And their hydrophilic  wings can absorb water, rendering them useless. We refer to these hapless bugs as “cripples”, unable to take flight and complete their lifecycle. Trout easily grab them.

The other event that triggers massive feeding is mating & egg-laying, which typically occurs in the evening. This is often accompanied by a hatch as well. Thus, trout have rising nymphs and pupae, cripples, duns, egg- layers, and spent spinners to choose from. They rarely fail to take advantage of this smorgasbord. Without question, this is the best time to be on the water.

An exceptions to this evening event is the trico hatch and mating swarm. This occurs in the morning. It has all the features of the evening event, but is especially noteworthy for the spinner fall. The spinners frequently blanket the water, bringing many trout to the surface (Fly Fishing Tricos &#8211; a Great Summer Hatch).

Its hard to forgo the pleasure of fishing dry flies during a hatch. But the studies of Swisher & Richards suggest that other techniques will increase our catch-rate. In addition, the big guys remain reluctant to feed on the surface, making subsurface techniques more likely to put them into a net.

James Leisenring developed a technique referred to as the “Leisenring Lift”. It is a highly productive method to fish during a hatch. A nymph pattern is cast across-stream and followed downstream with the rod-tip. The downstream drift is interrupted several times by stopping the rod. This causes the nymph to rise toward the surface. When the rod resumes a downstream motion, the nymph falls back toward the bottom. This nicely imitates the movement of nymphs struggling through the water column to reach the surface.

Another productive technique is fishing the film, especially with a tandem rig. I use a dry fly and an unweighted nymph or cripple pattern. This places the nymph or cripple 1-2″ below the surface. This zone is filled with easy to capture bugs (Fly Fishing Emergers).

Sulphurs in the East and pale evening duns in the west egg-lay in the evening. There is usually a concomitant hatch as well. The females mostly drop their eggs on the water’s surface, then expire. Thus trout come to feed both in the film and on the surface. The previously described tandem rig is a good choice for this event as well (Fish Tandem Flies and Catch More Trout).

Fishing spent-spinner patterns is another good choice at this time, especially near the end of the event. I usually fish them in tandem with a dry fly, which aids visualization.

Caddis offer another opportunity in the evening. But simply drifting a dry fly is often disappointing. The just-hatched caddis skip about the surface before taking flight, UPSTREAM. To imitate this, cast a heavily hackled dry fly across the stream, and allow it to drift downstream. Once positioned there, skip the fly upstream by flipping the rod tip. This is especially effective when presented to a sighted fish that is actively feeding on the surface.

Many caddis lay their eggs on the stream bottom. The females dive to the bottom, lay their eggs, then try to return to the surface. Exhausted, many fail to reach and break through the surface film. Trout focus on these subsurface bugs as well as rising pupae. Swinging a lightly weighted soft-hackle fly up to the surface nicely imitates this behavior. In my experience, this is the most productive technique to fish this event (Fly Fishing the Caddis Hatch).

Short of hiring a guide, there is no shortcut to “being at the right place, at the right time, with the right stuff”. Books and online sources ballpark bug species and hatch periods. But numerous local variables make these resources unreliable. For instance, tricos are a well known morning hatch. But in Virginia, this is a daybreak event, during the mid-summer months. By contrast, in Montana it begins as a mid-morning event in summer, and lasts into the fall. But as cooler weather arrives, the hatch occurs later in the day.

Another factor is the micro environment preferred by different bugs. Mayflies and stoneflies prefer faster water, and hatch at the tailouts of riffles. But tricos and midges prefer slower water, and the latter need muddy bottoms. Freestone streams usually have all these features, but they must be searched for.

Weather is yet another factor. While the caddis event is usually a reliable evening event, cloudy weather puts a damper on things. In contrast, olives hatch most heavily during foul weather, around mid-day or early afternoon. Thus a hatch may or may not occur on any given day, dependent upon the weather.

There is no substitute for on-stream experience and knowledge. This is best acquired by spending time on a handful of streams. Acquiring first-hand knowledge of the predominant bugs, their hatch and mating cycles, as well as the location of preferred stream features, allows one to consistently fish these events. That is the key to increasing one’s catch-rate of trout. Fortunately, doing our fly-fishing homework is great fun!

One thought on “How to Increase Your Catch-Rate of Trout!”