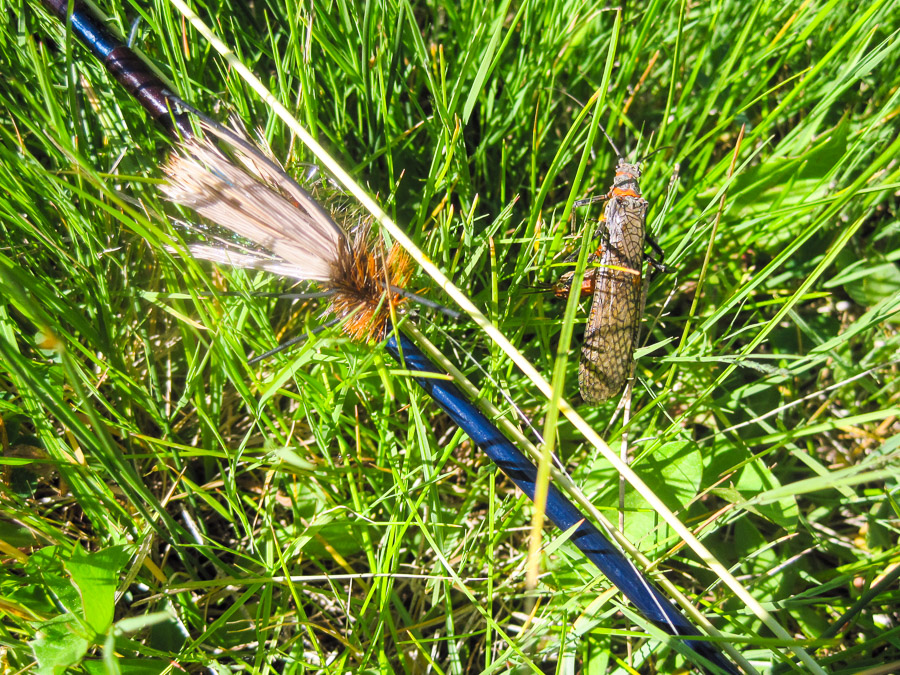 Matching the Hatch and Other Fly Fishing Short Stories

I want to start the new year off with a bit of a  twist. Instead of writing an advice column, I’m going to offer a few vignettes, spin some fly fishing short stories. They arise from quirky but true events that have happened over the years.

“When you come first to the river in the morning, with your rod beat upon the bushes or boughs which hang over the water, and by their falling upon the water you will see what sorts of flies are there in greatest numbers.”

This advice is found in “The Experienced Angler“, written by Robert Venables in 1662. It is the first such advice that I am aware of in the English language exhorting anglers to discover the bugs that the trout are most likely feeding upon. It follows that one attaches an imitative fly to match the hatch. To varying degrees, it is advice that most of us still adhere to today.

One day a few springs ago, while fishing one of my favorite local streams, I paused at one of its really good runs. I looked for bugs and/or feeding trout, but not much was happening. As I gazed about, I noted some monofilament hanging from a streamside bush. Looking more closely, I saw a fly dangling from it. Never one to pass up a gift-horse, I retrieved the fly. I’d never seen one quite like it before.  It had a rust-colored, thread body, and a flashabou tail. There were two bulky strands of pearlescent material running from the bend of the hook to the head, one along each dorso-lateral side. The closest pattern it seemed to resemble was LaFontaine’s sparkle pupa. I put it in my flybox, and promptly forgot about it.

Several months later, I was back fishing the same stream. Things were slow, and eventually I found myself back at that run. It’s a great run, one that always holds fish. I fished the upper portion of the run, but my usual brace of flies produced no takes. As I pondered the situation, I took out my fly box, and there I saw that peculiar looking fly. On a whim, I tied it on, and returned to the top of the run. I noted the bush I had retrieved it from, still lurking hungrily in the direction of my backcast. After positioning myself, I carefully made the first cast. Wham! Moments later I landed a nice fourteen inch rainbow. After releasing it, I continued to slowly work my way down the run, and caught several more nice fish.

After I completed fishing the run, Venables’s words came to my mind. I had indeed found the “hatch to match”, hanging out in the streamside bushes!

A Tale of “Slams”

According to Webster’s Dictionary, a slam “is a taking of all or all but one of the tricks (cards at play) in a card game”. Fly fishers have picked up on that theme, and refer to the taking of all available species of fish in a stream as a slam. While fishing a spring creek in Patagonia last winter, I established a new slam there, which reminded me of a similar happening quite some time ago.

Many years ago, before my hair turned gray, I was fishing the Missouri River with some fly-fishing buddies. It was evening, and the caddis flies were thick as a snowstorm. Trout were slurping all about us. Bats, chimney swifts and nighthawks were all enjoying an evening feast as well. The fish were picky, and the fishing was surprisingly slow. Suddenly, the evening tranquility was broken with a cry of “what the hell”? I looked over, and saw that one of my buddies appeared to have a fish on, with a sharply bent rod. It suggested a big fish.

But then I noticed that the rod was bent in the wrong direction, upward. Looking skyward, I followed his line, and saw a night hawk, frantically flapping its wings. It had engulfed his fly, and was now trying to fly away. My buddy expertly played him, much like a diving kite in turbulent winds. Moments later, he landed his catch, and released it unharmed. We congratulated him on truly “matching the hatch”, and successfully establishing a new “Montana Slam”,  a rainbow trout and a nighthawk, in one outing!

My “Patagonia Slam”, included a bank swallow and rainbow trout. I don’t know how often this happens; hopefully not very. Fortunately, in both of these cases, neither bird was injured.

One day I was fishing the Rockfish River in Virginia, a good smallmouth bass stream. Yes, when trout fishing isn’t available, I will occasionally fish other species of fish! While stripping my fly, I glanced upstream, and saw what appeared to be a monster of a fish. It was slowly undulating in the water, and appeared to be eight or nine feet in length. The river was only twenty to thirty feet across, and this fish was clearly not a normal resident. For a moment I wondered if someone had released a pet alligator, grown too large to keep any longer. Whatever it was, it clearly did not belong in the modest-sized Rockfish River.

It was coming directly at me, and there wasn’t room for both of us. I started to head for the bank, real fast! The sudden commotion caused the monster-fish to stop. It then became even larger, right before my eyes! Astonished, I suddenly realized that what had appeared to be one large fish, was actually a school of small gar. Each was about twelve inches long. They were grouped and swam in a way that made them appear to be a large fish.

After a moment, they must have realized that I was not a threat. They tightened their formation, and proceeded downstream. I have not seen anything like this since, but believe that I had witnessed a defense mechanism of young gar. I returned to my fishing, just relieved that it wasn’t an alligator or some other monster!

They Really Suck on the Yock

A number of years ago, more than I care to remember, I was fishing the Youghiogheny River (pronounced yock-a-gainey). It’s a well known stream in the Maryland panhandle, and known locally as the “Yock”. It was mid-morning on a fine summer day, but no hatch nor dimpling fish were to be seen.

I had been fishing over an hour, with nothing to show for it. Standing mid-stream, I was drifting a dry fly through some really good-looking bankside water. The current was slow, with a foam-line along the bank that passed under some overhanging tree limbs. After several good drifts without a take, I glanced away for a moment. When I returned my attention to the water, I couldn’t see my fly. I lifted my line, and the fly rose to the surface, with no resistance from a fish.

I recast and drifted the same foamline. The fly again dropped from site, with no discernible riseform. I assumed that I was dragging the fly under the water’s surface due to poor line management. Disgusted with myself, I recast a few more times, when the same thing happened. More than a bit angry, I jerked my line off the water, and to my surprise, found that I was tight to a sizable fish.

After landing the sixteen inch brown trout, I carefully replayed the events. No snout or fin had broken the water’s surface, and no riseform had been visible. That left but one possibility- the trout had sucked the dry fly off the surface, leaving no discernible disturbance of the water.

The take of surface flies by trout has been studied quite thoroughly. As they rise, they create a vacuum in their mouths by dropping the floor of their mouth and closing their gills. When they open their mouth to ingest a fly, there is a resultant inward flow of water.  This inward flow prevents the targeted fly from washing away in the wake created by their rise to the surface. Invariably, a riseform, often with a release of bubbles through the gills, is left on the water’s surface.

Since fishing the Yock those many years ago, I don’t know that I have again seen trout with such a strong suck that they can pull a fly off the surface without leaving a tell-tale riseform. Oh well, we live and learn- never take our eyes off our fly, and set the hook whenever our fly misbehaves!

After a number of years, our family vacation to the Madison River Valley finally coincided with the famous salmon fly hatch. We checked at one of the local fly shops, The Madison River Fishing Company, (http://www.mrfc.com) on the evening of our arrival. The hatch is dynamic, moving upstream several miles a day. It lasts only a few days at any section. The guides at the shop pinpointed the section of river the hatch had progressed to, saving us many hours of driving and bug searching.

The following morning we headed to a stretch of wading water. We were pleasantly surprised to find that we had several hundred yards of good looking water to ourselves. We checked the streamside brush, and sure enough, discovered numerous, hatched salmon flies. There was no other hatch evident.

I waded out toward the middle of the stream, tied on a salmon fly imitation, and worked the shoreline under the overhanging brush. Matt, an accomplished fly fisherman at age fourteen, waded out as well, and began fishing some midstream pockets.

I had yet to draw a strike, when Matt let out a whoop, and landed an 18-20 inch rainbow. Perhaps ten minutes later, he let out another whoop, and I saw him landing another large rainbow. I continued to fish the shoreline, patiently waiting for my turn, when he let out yet another loud whoop. Still without a strike, I finally swallowed my pride and called out to him, “OK, what are you using?” He called back, “a size 16 parachute Adams!”

That’s right, we had traveled over 2,000 miles from Virginia to Montana to fish the salmon fly hatch, and he was killing them with a parachute Adams. Meanwhile, I was catching nothing on a salmon fly  imitation. So much for matching the hatch!

If you have any funny or insightful fly fishing stories, true or otherwise, and wish to share them, please forward them to our website. We will be happy to post them, with credit or not, (your choice of course)!