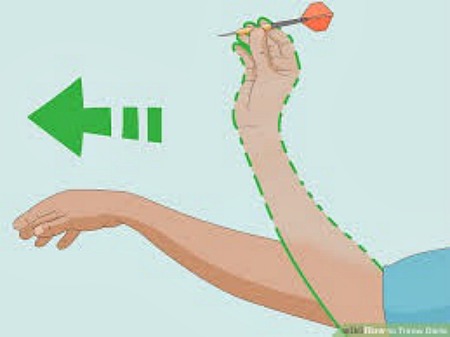 Learning to cast a fly rod is easy, right? We’ve all read or heard descriptions of the casting  motion, “speed-up, stop, and pause”. Or, “ten-to-two, two-to-ten”. But watching beginners trying to apply these scripts, it is clear to me that they don’t lead to a clear mental image of the casting motion.

One day, following a Fly Fishing 101 course at the Orvis Flyshop in Charlottesville, we discussed casting images that might help learners. Many beginners, especially men, tend to see and apply a baseball- throwing motion to the fly rod. Such a motion moves the casting hand and butt of the rod through a long arc. This makes it more difficult to load the rod, that is, to produce a flexing of the rod. To flex the rod, the tip of the rod has to move through a longer arc than the butt. Thus a short hand-arc, limiting the movement of the rod butt, makes it easier to obtain the desired flex. Therefore, we agreed that a general throwing-motion image would not be helpful.

We next considered the often used “hammer tapping a nail into a wall” image. While this conveys the short casting arc, it doesn’t seem to convey the energy or force needed for a good cast. Thus, we dismissed it as well.

Finally we settled on throwing a dart. A dart-throw motion consists of a quiet elbow, nearly fixed at the hip, with a quick, short motion of the forearm and wrist. Such a motion, applied to a fly rod, would result in a good forward cast. The backcast is then a mirror image of the forward cast.

It takes practice to transform or imprint a mental image into a learned mechanical motion. One of the best practice drills for fly casting that I have learned, is to cast in the horizontal plane. This allows easy visualization of both the forward and back casts. It is best done by placing two targets, such as small traffic cones, forty to fifty feet apart. The caster is positioned midway between the targets, with the rod-tip touching an imaginary line connecting the targets. The fly line is then cast back and forth, passing over the targets.

This exercise requires a short casting arc, and uses only the forearm and wrist. The elbow naturally rests at the hip, and the upper arm is quiet. The rod tip must travel in a straight line. If it deviates from this, the line passes either inside or outside the targets. Most commonly, learners use too long a casting arc. This results in the line missing the target, and passing inside or toward the caster. Once visualized, casters usually self-correct the casting motion.

After a good casting motion is achieved, with the line passing over both targets, I suggest the caster close their eyes. Eliminating the sense of vision heigthens the other senses. The caster soon senses only the movement of the hand, and the flexing of the rod-tip. This is ideal, and allows the caster to fish without constantly looking at the back cast.

Once this casting image is imprinted, the rod can be slowly raised to the vertical while continuously false casting. The caster has now “mastered” the overhead cast.

The compact, dart-throw casting motion is ideal for the short to medium casts required for most trout fishing. But sometimes a cast over sixty to seventy feet is helpful. This may require a longer casting arc.

To extend the casting arc, the upper body is rotated, and the casting arm extended rearward. When teaching this cast, Lefty Kreh used an image of a board attached to the hip, extending rearward at a slight upward incline. He then instructed casters to slide their elbow along this imagined board. Doing this keeps the rod tip moving in a nearly horizontal plane, and results in an ideal, tight-line loop. While extending the casting arc and incorporating additional muscles adds power to the cast, most of the power still comes from the proper use of the forearm and wrist.

Learning to cast properly is both fun and rewarding. If not happy with your casting, (who is?), try to envision a dart-throw image while practicing. A good mental image of fly casting will help with the acquisition of a good casting motion.

One thought on “Mental Image of Fly Casting”