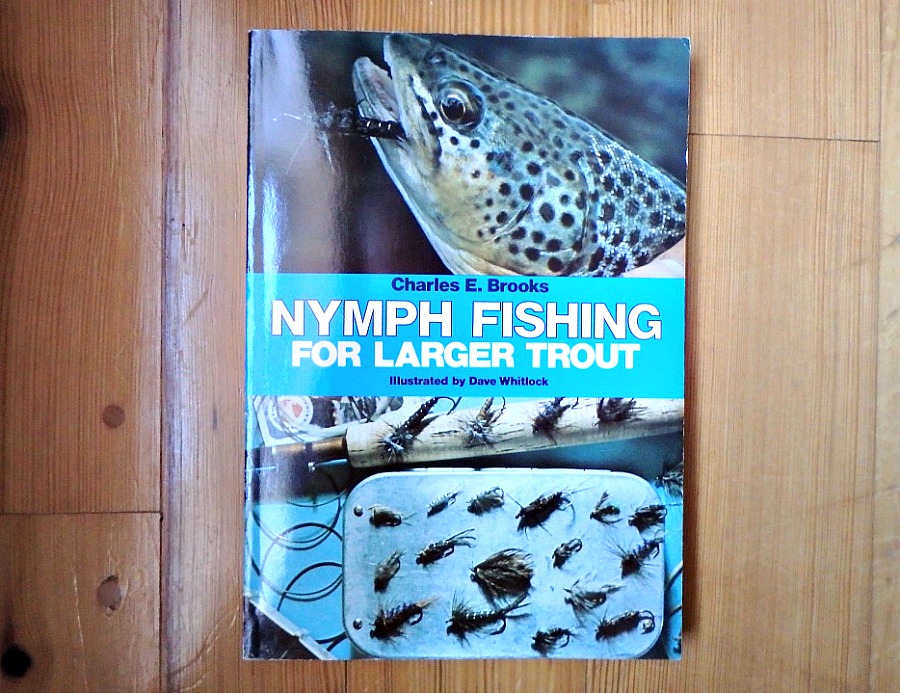 Another of my favorite author’s is Charles E. Brooks. He hales from an earlier era, and wrote several books, two of which I have read. I particularly liked “Nymph Fishing for Larger Trout” (1976). It is  illustrated by Dave Whitlock.

Although concise, the author summarizes ten nymphing methods employed at that time. In addition, he introduces and thoroughly explains the “Brooks Method” of nymphing. He developed it for fishing the deep, fast runs of the Madison River in Montana, where big trout hold.

“When a trout in such currents darts from behind his boulder, or lifts up from a bottom depression to seize a nymph, he is instantly slammed with the full force of what actually amounts to a moving wall of water. That water will be moving, in some cases, at twelve or more feet per second. It will thrust the trout downstream several feet in the half second or so it takes him to reach and grab the nymph speeding by. The instant he has secured the nymph, the trout will whirl sharply upstream to swim back to the protection of his lie. It is then, if his line is under control, that the angler will feel the strike, a hard, fierce, jerk. The answering strike must also be fast, and hard or you will not hook your fish”.

“Thus the basis of the method is getting a large artificial down deep enough for the trout to see it and want to take it, and under enough control to be able to feel and hook the fish if he does take it.”

“The stream is a book with an endless number of pages; no matter how well one reads or how long, he will always be coming on new and exciting chapters. There is a never-ending fascination beneath the surface of a stream and the happy reader knows that he will never in his lifetime be finished with this lovely book.”

And for those who think that Euro nymphing is something new-

“On most takes, there was no take that could have been detected other than by actually seeing it. At no time did more than the last foot of leader move perceptibly. Even the old trick of a fluffy dry fly at the leader-line connection did not help. What did help was greasing the leader down to within a foot of the fly. Then and then only could I detect any on-the-surface movement.”

Not much has changed since this was written 43 years ago. Today, when tight-line or Euro nymphing, rather than greasing our leader, we use a piece of colored tippet!

This is a great read about nymphing for trout!