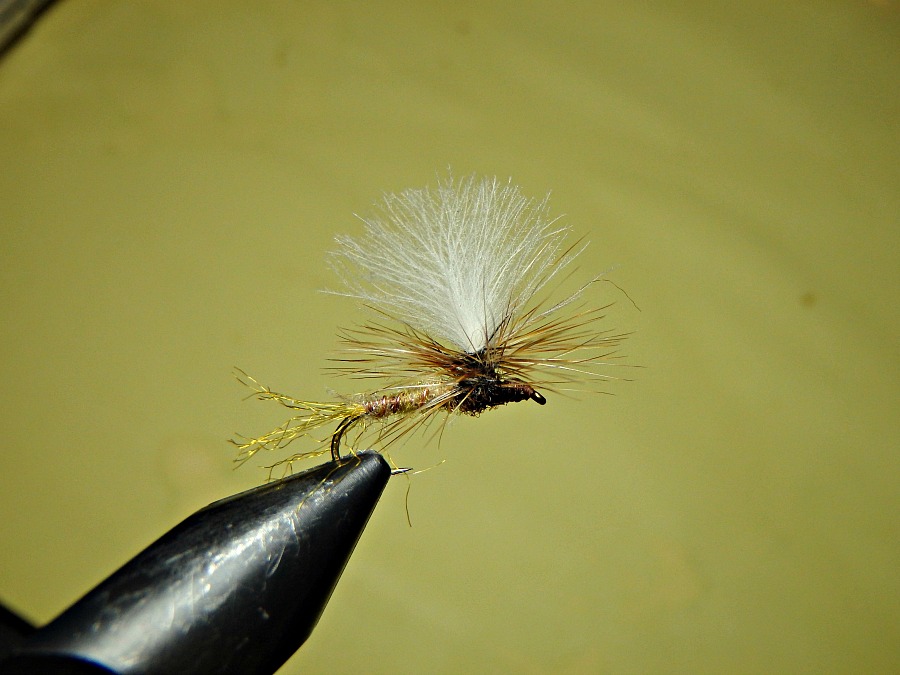 When I first began fly fishing, parachute flies seldom filled flyshop bins. Catskill flies were in vogue then. But I quickly realized that flush floating flies, like comparadun and parachute flies, put more fish into my net.

I still don’t know with certainty why trout prefer parachute flies. It may be that viewed from below, they look like cripples or spent-spinners, more vulnerable stages than the flight-ready dun.

In contrast, the Catskill fly, resting on its hackles and tail, appears like a dun, ready to take flight.

In addition to drawing more strikes, parachute flies yield a higher hooking rate. I suspect this is due to the fact that Catskill flies frequently land on their sides. Thus the hook is presented out of plane to a rising trout, and often does not enter its mouth.

While the parachute Adams is the most universally fished dry fly, parachute flies of all types fill my fly boxes. In addition to mayfly imitations, I also tie terrestrials with a parachute. I frequently fish Quigley Cripples and Klinkhammer emergers. With their abdomens below the surface, and a parachute protruding above the surface, they frequently fool persnickety trout.

When tying a parachute pattern, the post material requires the most consideration. First, as is the case with all the flies that I tie, the material cannot make tying too complicated. Unlike some of our tying colleagues, I am not an artist at the tying bench. I like to have a finished product in a few minutes.

The post must provide excellent visibility, for as they say, a fly unseen means a strike undetected! Thus I tie with different colors for different light conditions.

Lastly, I tie durable fly patterns that continue to fish for an hour or two. Thus a drop of cement at the base of the post is a must, and the post material must remain buoyant. I’m on the stream to fish, not change soggy flies!

I have been tying parachute patterns for many years. While I began with the traditional calf-hair post, I have since tried a variety of materials. They vary in their ease to tie, water absorption/floatation, and visibility. The latter has become increasingly important as my eyes continue to age!

Calf hair has short, wrinkled shafts. It is relatively stiff as well. Thus, it is a bit challenging to tie into a post. However, the end result is a broad, white post that is readily seen under most light conditions.

Other natural hairs, deer, elk, and squirrel, have straight, thin shafts, making them easier to tie. However, they result in a thin post, which is less visible than calf hair. In addition, they mostly come in natural, muted colors, which further reduces their visibility. But all natural hair contains some air pockets, and resists becoming water-logged.

Zelon and poly yarns are the easiest materials to tie into a post. I lay a length on the hook shaft, and attach it with several laps around the middle of the material. Then I lift the two ends, pinch them together, and secure with wraps around their base. This results in a fairly thin post, especially with Zelon. Both yarn and Zelon absorb water, and must be treated to remain afloat. But a plus is that they come in a variety of colors, the importance of which I’ll address in a moment.

A more recent material is foam rubber. It is easy to tie and is water resistant. But I find the thin posts difficult to see, regardless of the color used.

My favorite is CDC (cul de canard) feathers. A bit more difficult to tie, the result is a readily seen, fluffy post. When they get soggy, a squeeze and a blow or two restores them to a nearly dry state without the use of floatants or desiccants. In addition, they come in a variety of colors.

White is undoubtedly the most frequently used color, due to its high visibility under most light conditions. However, on cloudy days, it is much easier to see gold or tan posts. I prefer these colors to the often sold “high-vis” posts of orange and/or chartreuse.

When fishing into evening dusk, moonlight replaces sunlight. The water surface glimmers like silver, and white posts become nearly invisible. Even though it is getting dark, contrary to intuition, it is easier to see black or dark brown posts than light-colored posts.

6 thoughts on “Parachute Flies- It’s All About the Post!”