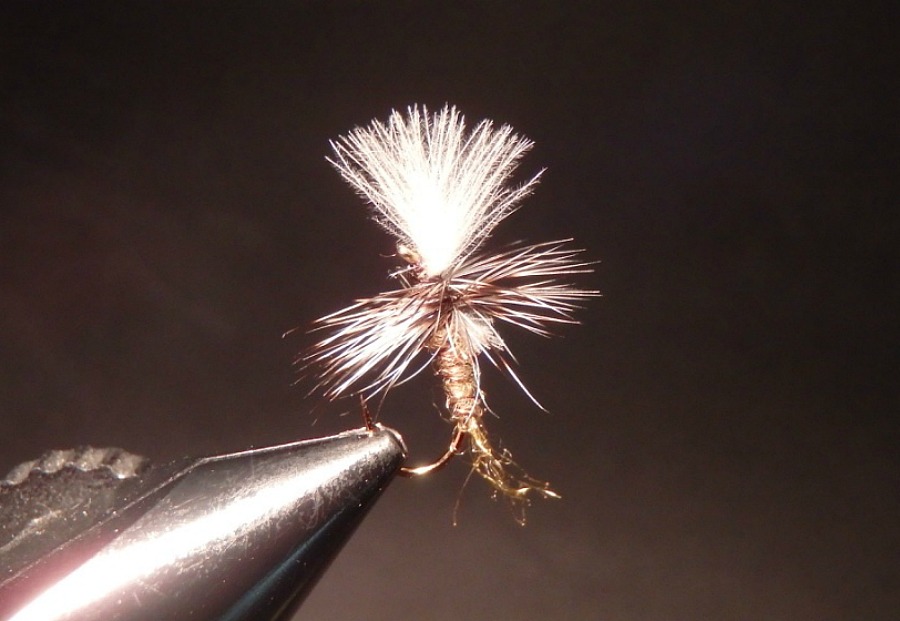 Quigley Cripple- Shuck or No Shuck

Flytier Bob Quigley has created a number of original flies. His best known, the Quigley Cripple, has long been a go-to fly for me. Many times in the midst of a hatch, trailing it behind a dun pattern has turned refusals into strikes, and saved the day.

However, when I examine it, except for the addition of a forward leaning post, it isn’t very different than a traditional Catskill dry-fly. It has a tail or shuck, and the hackle is wound about the front hook-shank. Thus, I have always wondered whether the abdomen actually sinks below the water’s surface or remains flush on the surface. Exhausted, emerging nymphs and pupae, trapped just below the film, hang there in a near-vertical position. (see “Emergers” by Doug Swisher and Carl Richards). Consequently, I tie the Quigley Cripple sans shuck, in the belief that the fly will more readily hang in that posture.

One day last month, a dreary winter day it was, I decided to resolve the issue once and for all. Is the fly better tied with or without a shuck?

I tied up some Quigley Cripples, on #14 and #16 standard, straight-shank, dry-fly hooks. The abdomens were tied with Antron, and ribbed with copper wire. I used CDC feathers for the posts. Several turns of Whiting, grizzly hackle were wrapped about the post and thorax. Two flies were tied with sparse, Z-lon shucks, and two without.

The experiment consisted of dropping each pattern into a pyrex cooking dish partially filled with water. Each was dropped ten times. To simulate a cast-fly, they were dropped from two feet above the water. Before dropping them, I blew vigorously to simulate the drying effect that occurs with casting. The flies were left floating for thirty seconds, similar to a drift.

Due to unanticipated variables in the flies with shucks, I repeated the series of drops once more. I allowed two days between the series to assure that the flies were completely dry.  Thus each fly with a shuck was dropped a total of twenty times.

As I expected, the shuck-less flies almost immediately assumed the orientation of an emerging or crippled bug. The abdomen hung vertically in the water below the film, while the thorax and post rested above the water. Hook size was not a factor.

However, when I repeated the experiment with the original Quigley pattern, I observed mixed results. Of the original ten drops, it floated much like a dry fly on the first two drops.

This was of course my concern with the presence of a shuck. However, on succeeding drops, it assumed various positions of partial submergence.

Postulating that the fly’s position was changing due to the absorption of water, I repeated the experiment as described above. The initial drop again resulted in a floating fly. This time I left it floating for two full minutes, with no change. I therefore swirled the water a bit, to simulate the movement of water in a stream. The fly continued to float like a dry fly. But on the next drop, it quickly assumed the partially submerged orientation of an emerger or cripple.

After seven to eight drops, the fly assumed a vertical orientation on the remaining drops. But as seen below, the fly was now nearly submerged, saturated with water.

So what have I learned? If the Quigley Cripple is tied without a shuck, it reliably assumes the position of an emerging or crippled fly on every drop. It does so almost immediately after alighting upon the water. This is true for both large and small flies (I have since tested #18 and #20 flies with the same result).

But if tied with a shuck, it behaves differently. Initially, it floats like a dry fly. But after absorbing some water, the abdomen sinks to variable degrees, generally up to forty-five. As the fly becomes completely soaked, the abdomen sinks further, to an angle of ninety degrees. However, it rides so low in the water that it would be difficult to see when fishing.

Confounding variables that I could not account for include actual casting, and the absence of tippet attached to the fly. A floating tippet might hold the fly on the surface for a longer period of time. If so, the knot used to attach the fly, Clinch or loop, might also affect the fly’s orientation.

Given these findings and limitations, I would suggest the following-

if a ninety degree angle is desired, use a fly with no shuck

if an angle less than ninety degrees is acceptable, use a fly with a shuck, but-

So, shuck or no shuck? With the provisos above, it may not make a great deal of difference. However, I will continue to tie it sans shuck, as I prefer the vertical posture that it reliably assumes without a shuck. Regardless of how it is tied, trout love the Quigley Cripple. So if you haven’t fished one, you should give them a try!

One thought on “Quigley Cripple- Shuck or No Shuck”