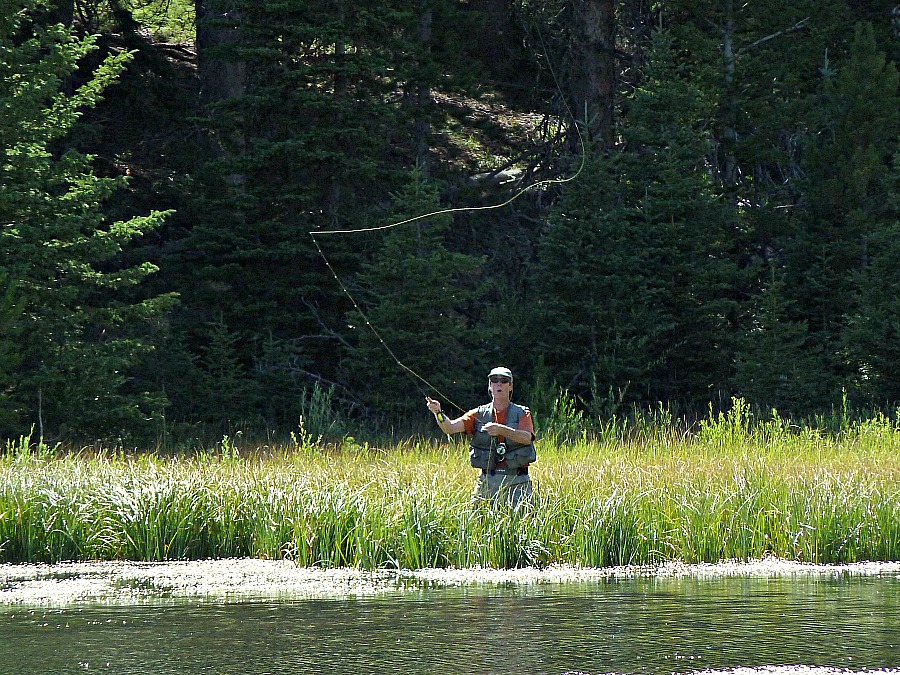 Reaching the Next Level of Fly Fishing for Trout

Fly fishing is becoming ever more popular. Most people try it once or twice, while a few make it an annual event for a week or two. Fewer still make it an avocation. But it is these few who can struggle for years at a beginner’s level, hoping to reach a higher level. This article outlines an approach to reaching the next level of fly fishing for trout.

Some years ago, someone wrote in a fly fishing magazine that one cannot maintain a single-digit golf handicap, be an expert fly fisher, and remain married. At the time, I was struggling with that triad. Since then, my golf game has utterly deteriorated. But I have remained happily married, and become an expert at fly fishing for trout.

Thus the first requirement to reaching the next level of fly fishing for trout is a commitment of time. Time must be spent on the stream, practicing casting, and studying a variety of other aspects of the sport. Most expert fly fishers are on the stream at least seventy-five to one hundred days a year. Additional time is spent in preparation, that is, reviewing equipment, hatches, flies, etc. They also interact with other fly fishers, exchanging ideas and observations. As they say, there are “many ways to skin a cat”, and we can all learn something from one another.

As a good golf swing is essential to being a good golfer, good casting is essential to being a good fly fisher. A good caster can easily hit a small target, such as a dinner plate, with nearly every cast, over a range of sixty feet. When needed, a longer cast is in the good caster’s bag as well. Good golfers practice at the driving range and putting green weekly; good fly fishers practice casting in the yard or on a pond weekly.

It is essential to  master more casts than the simple overhead cast. Casts that help extend the drift, like the tuck cast, the parachute cast, and the “S” cast must be learned. Curve casts and aerial mends help with this as well. The roll cast is needed for casting in tight corners. And for those windy days, the double haul should become second nature.

In addition to mastering a variety of casts, a good caster is efficient. False casts are minimized, eliminated altogether for short and medium range casts. An accomplished caster can target spots others are unable to fish. In summ, good casting is a foundation to becoming an expert fly fisher.

But so much for backyard practice. Now it’s time to hit the water. The water’s surface is rarely smooth. Rather, portions of it move at different speeds. Runs, riffles, eddies, and slicks intermingle, making it difficult to present a fly free of unnatural movement, i.e., drag. While the previously mentioned casts help with this, line adjustments or mends, must frequently be made after the cast, during the fly’s drift.

Effective mending, as such line adjustments are called, takes practice on the water. To prevent drag, one must recognize that the current is pulling a portion of the line at a speed different than that of the fly. Just enough line must be lifted off the water’s surface and flipped upstream in fast water, or downstream in slow water, to keep the line and fly moving together. Done properly, the fly’s drift is not disturbed with the mend.

More time on the water is needed to learn where trout stay or lie. This is generally referred to as “reading the water”. Trout occupy different portions of a stream in each of the four seasons. In addition, they move about each day, from feeding lies to hiding or holding lies. Learning where trout hang-out is key to a productive day on the water.

Understanding trout behavior is best learned by fishing the same stream very frequently. The chosen stream is often referred to as the fly fisher’s “home water”. It must be fished for at least a year in order to understand the seasonal changes in trout behavior. In addition, it must be fished under a variety of weather conditions. Sun, clouds, rain, snow, high water and low water all change trout’s behavior. But if understood, trout can still be caught in each circumstance.

To become a well rounded trout angler, all of the water types in which  trout live need to be fished and understood. That means taking the time to fish spring creeks, tailwaters, still waters and freestone streams.  Such a chore, but better than most alternatives, right?!

At the turn of the twentieth century, G.E.M. Skues described fly fishing as “an intellectual exercise designed to outwit the trout”. With this statement, he identified another of the necessities to advancing one’s game. It requires a commitment of time to read, time to study, and time to visit with other anglers. Stated differently, dedicated time to apply one’s intellect to the sport.

In contrast to times gone by, there is an almost overwhelming abundance of fly fishing information available. In addition to our web site, “Simpsonflyfishing.com“, there are a myriad of helpful sites. Among the best known include: http://howtoflyfish.orvis.com, MidCurrent.com, and Ginkandgasoline.com.  There are also books, magazines and videos. Almost any topic is available on youtube.com.  Finding a willing mentor shortens the learning curve as well.

Aquatic bugs make up the majority of a trout’s diet. Therefore, one needs to learn the life-cycles of the bugs present in streams fished. Four orders of aquatic insects, mayflies, stoneflies, caddis, and midges, provide most of the fare.

Trout feed most actively during a hatch. What season, what part of the day, what weather and water conditions lead to a hatch? Is there a lifecycle-stage most vulnerable to trout, and therefore preferred? Armed with this information, an angler will more often be “at the right place, at the right time, with the right stuff!”

Once the feeding preferences of trout are understood, it becomes apparent that the angler must learn a variety of strategies to offer or present flies to feeding trout. Everyone loves to fish a hatch and watch the quarry take a dry fly off the water’s surface. But trout stomach samples reveal that most of a trout’s diet consists of nymphs. Therefore, expert fly fishers are prepared to fish the surface, the film, and the subsurface, all the way to the bottom. Their armamentarium likely includes a variety of rods (yup) and lines, floating and sinking. And their fly boxes include flies that facilitate fishing each of the levels of the water column.

Trout species also differ in behavior. Each specie has preferred water conditions or types. They feed a bit differently, and their fight is different as well. Therefore, it’s helpful to know what fish are present in a stream, as well as their habits.

But in the end, the characteristic that most separates expert fly fishers from  casual fly fishers is the intensity with which they approach their sport. They study, practice, and experiment with different flies, techniques and strategies. When on the water, they are completely focused on the objective at hand. Casual fishers drink their beer while fishing; expert fly fishers drink theirs AFTER fishing. Nothing distracts them while on the water.

So, if you want to reach the next level of fly fishing for trout, become an expert fly fisher, this is what it takes. It isn’t for everyone, and there is nothing wrong with that. Being a casual fly fisher is just fine. We should never lose sight of the fact that fly fishing is a sport, something we engage in for pleasure. So no matter what level of engagement one chooses or skill-level reached, be sure and keep it fun!