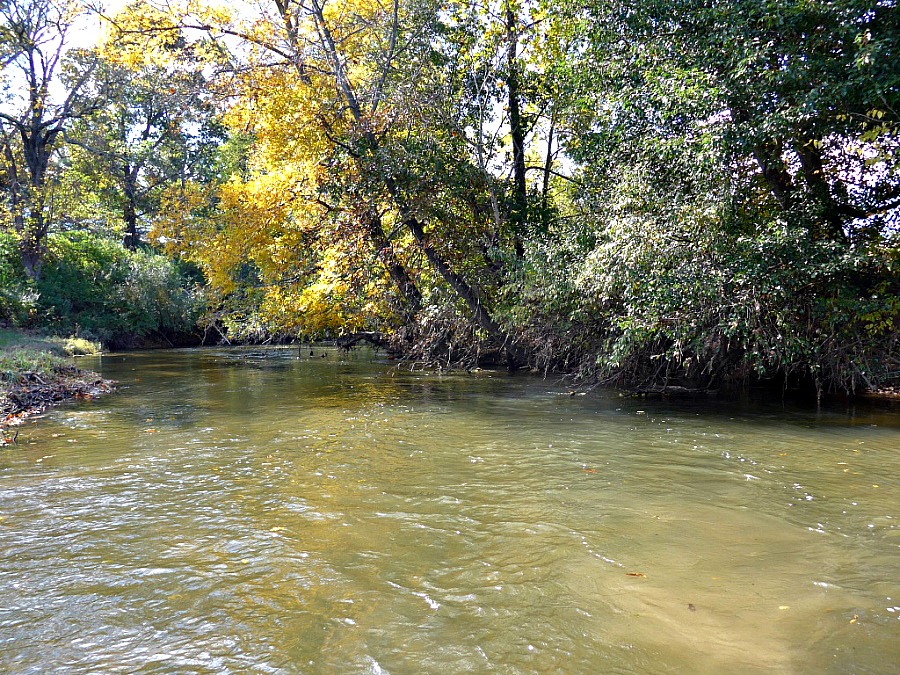 Earlier this year, in “Reading the Water – Prime Trout Lies“, I reviewed the habitat requirements for trout survival: cool and well oxygenated water, protection or cover from overhead predators, readily available food, and a break from the force of a stream’s current. When all these elements are present in one location, it is referred to as a “prime lie”. But in most freestone streams, only a very small portion of the water offers all of these elements simultaneously. Therefore, when trout emerge from their winter pools in the spring, they distribute themselves within a watershed by a Darwinian process. The largest and strongest fish will find, hold, and occupy the prime lies. The other fish are forced to seek alternate or secondary lies, which lack one or more of these basic requirements. In this article, “Reading the Water – Secondary Trout Lies”, I will review these alternate lies, the movement of trout from one to another, and how to identify and fish them.

The most necessary of the habitat requirements for trout is a break from the force of a stream’s current. Trout can survive without food for weeks, perhaps months in very cold water. They can also tolerate low levels of dissolved oxygen for quite some time. But put them in a fast current without relief, and they will perish in a few days. Therefore, all secondary lies share this attribute with prime lies.

A variety of stream structures can provide a break from the current. Examples  include submerged rocks and logs, thick beds of aquatic vegetation, and deep pools. The picture below reveals a submerged log, which slows the current, both in front and behind it.

The next most important element is shelter or cover from overhead predators. As fish grow larger, suitable cover becomes increasingly difficult to find. The break point is probably reached when a fish’s length approaches the mid-teens, measured in inches. At this length or greater, a fish can no longer safely hold in water that is much less than two feet in depth. Thus larger fish that are unable to find or defend a prime lie will seek a lie with additional overhead cover, i.e. a “holding lie”. This is most often provided by undercut stream banks, overhanging trees and grasses, logjams, and flotsam. Below is a picture of a stream-section on the South River in Virginia. The overhanging vegetation offers good overhead cover.

Such lies may provide some food for trout holding in them, but it is not sufficient to sustain them. Eventually, hunger will require them to leave such lies in order to feed more heavily. This may happen only two or three times a week. After feeding, they will return to their more protected lies.

Smaller fish, on the other hand, are quite secure in more shallow, less protected lies. They will feel safe with a bit of overhead surface chop. In smoother water, they will feel comfortable if there are nearby aquatic plants or rocks which can be reached with a flick of their tail or caudal fin.

Lies that provide a steady supply of food but lack adequate cover for larger fish, are referred to as “feeding lies”. They will be occupied by the smallest fish. Such lies include riffles and shallow runs below riffles. However, the larger fish will leave their sheltering lies and move into feeding lies when necessary to feed and sustain themselves. They usually do so under low-light conditions, such as early morning, dusk, and during cloudy weather. Large brown trout may become exclusively nocturnal feeders.

Riffles offer a unique aquatic habitat. They have well oxygenated water, and are shallow enough to sustain sun-dependent algae and aquatic plants. This substrate supports larvae and nymphs, making riffles the most food-rich sections of a stream. Fish that feel secure in a riffle have a fairly constant food supply at hand, and will be feeding almost every day. Thus riffles are a prime lie for smaller fish. But for larger fish, they are only a feeding lie.

Therefore, assuming that a stream has good quality water, trout will first distribute themselves to areas that afford a break from the current. The largest, dominant fish will claim the primary lies, which also provide food and shelter. The remaining fish will be forced to seek secondary lies. Sheltering lies will be occupied by the next largest fish, while smaller fish will fend for themselves in shallower, less protected water.

At this juncture of my fly fishing journey, I most enjoy seeking and catching large trout, or helping others to do the same. Therefore, I do most of my fishing during low-light conditions. The low light temporarily converts less protected feeding lies into prime lies, and many large fish will move from their sheltering lies into them.

If a hatch is on, I will fish on the surface, using a matching dry fly,  with a trailing emerger. I will fish the prime and feeding lies, which is where rising fish should be visible.   After fishing these lies, I may then fish the sheltering lies, provided I don’t think that I’ve spooked any trout that may have remained in them. Although they will not be actively feeding, if offered a sizable morsel, they can often be coaxed into taking a fly. Streamers, buggers, large nymphs, terrestrials and bushy attractors  will usually be required to tempt them sufficiently to draw a strike.

If a hatch is not on, I will fish subsurface, using a wooly bugger or small streamer. Generally I will attach a trailing nymph or wet fly. I will fish the prime and holding lies first, which is where the larger fish will usually be found. After fishing these lies, I will fish any undisturbed feeding lies, such as riffles and the bubble-lines below them. In low light, some larger fish may be mixed in with the resident smaller fish, even in the absence of a hatch.

If one learns to “read the water”, takes the time to study a stretch of stream before casting that first fly, and develops a plan to fish it, the chances of landing some trophy trout will be markedly increased.

Additional related articles of interest include:

One thought on “Reading the Water – Secondary Trout Lies”