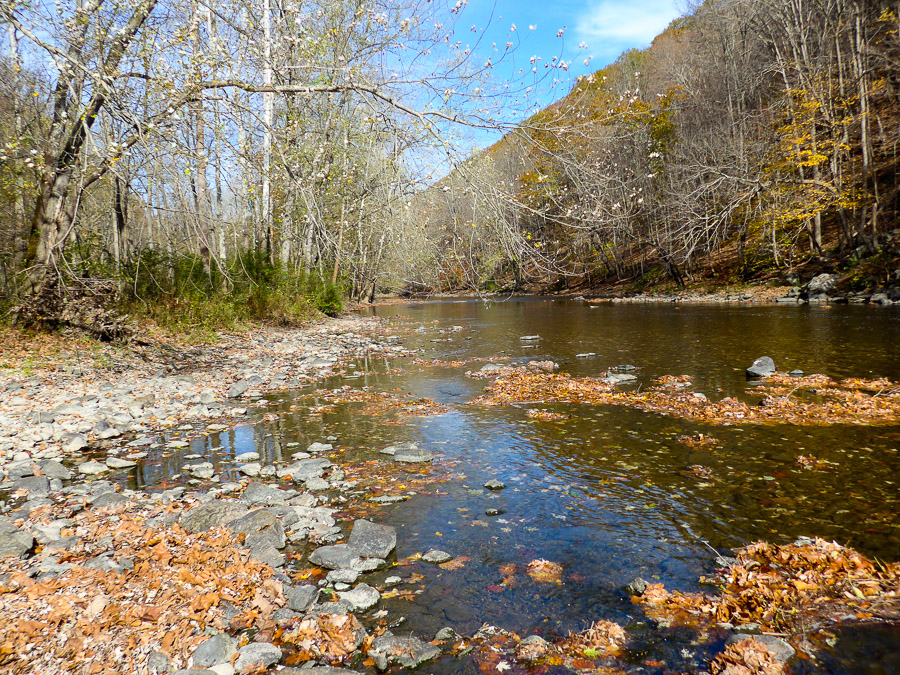 Seeking Trout- when streams are low

After spending the summer in Montana, interrupted by a two-week trip to Kamchatka (see September article), I knew that when I returned to Virginia I would have to adjust my fly fishing expectations, or in political parlance, “do a reset”. However, I was not prepared for the severity of drought that I found to be afflicting the mid-Atlantic region. Seeking trout when streams are low is a challenge, one that seems to increasingly face fly fishers in this region.

It’s my recollection that seasonal droughts have been occurring in Virginia for nearly fifteen years now. Curious, I went to the USGS (United States Geological Survey) Groundwater Water Watch website. They have data from 1973 to the present, tabulated and graphed. From 1973-1994, the average depth from ground surface to water in our area was 20 feet. After 1994, a gradual decline began, punctuated by a severe drought period from 2000-2003. The depth from ground surface to water increased to 36 feet. A significant recovery occurred in 2004, but we have seen no further recovery, and have remained about 5 feet below earlier norms. The current ground water deficit is therefore about 25% below normal.

The ground water deficit affects our streams in a number of ways. Springs, a reflection of ground water pressure, do not put out as much water. Therefore, most streams are shallower and their flows, measured in CFS (cubic feet per second), are lower than previous norms. When we get a rainfall, freestone streams rise. Currently, they fall to their low levels in only 1-2 days. Prior to our current condition, they gradually fell over a week’s period. Thus a weekly rain maintained good flows in our freestone streams. Unfortunately, this is no longer the case.

When faced with such grim circumstances, how does one seek suitable trout water? I usually begin my search by looking at the USGS Stream Flow website. Water flow in CFS and depth are available for most of our larger streams. Current conditions are charted vs. the 30-year average.

I also keep a log of optimal water flows on the streams that I like to fish, and compare current conditions with my notes. Most watersheds are separated by mountain chains. They effect where and how much rain falls with passing weather systems. I check each major watershed’s data. Usually a stream can be found with adequate water to support its trout, though a bit of travel may be required.

As I looked at our current conditions, I found that most of Virginia’s freestone streams were running at only 25-50% of optimal flow for trout fishing. So I expanded my search to West Virginia and Pennsylvania, good portions of which can be reached within a four-hour drive of our home. To my dismay, the more reachable portions of both were similarly afflicted by the drought. However, the northern half of Pennsylvania was in better shape, with low but not dire conditions. So I headed north last week.

My destination was the Little Juniata River, commonly called the Little J, just south of State College. Portions of it were visible from the roadway, and it appeared to be low. I confirmed this at several access points. Discouraged, I opened my DeLorme Atlas and Gazetteer for Pennsylvania. I never travel, looking for trout water, without a gazetteer. They provide the best look at stream locations, out of the way roadways, foot trails, stream access locations, and other facilities. I found a tributary of the Juniata River not too far away. When I reached it, it appeared to be fishable. The picture below reveals that it was also low, but it was a big enough stream that there were some deep runs, holding fish.

The next picture reveals leaf-coated shallows, but a nice run in the background, identifiable by a foam line. It was a bit of a hike between such runs, but the fish were there. A sparse, tan caddis hatch was in progress, but I couldn’t see any rises. So I tied on a #16 tan soft-hackle and a twelve-foot leader on a floating line; the fish found it quite appetizing!

Another approach to finding trout water on freestone streams is to head for the mountains, that is, hike into the headwaters. The steeper gradients in the mountains scour out deep pools, and although they will be lower during droughts as well, many will be deep enough to provide holding water for the fish. In Virginia, these are of course brook trout streams.

Searching for Spring Creeks and Tailwaters

If I’m looking for something bigger than a brookie, there are two other possibilities to consider, spring creeks and tailwaters. They are generally less affected than freestone streams by drought.

A few days after returning from Pennsylvania, I drove over to Mossy Creek, a nearby spring creek. I used to fish it frequently, and know the public section intimately. Touted as Virginia’s premier spring creek, it boasts excellent sulfur, trico and midge hatches. As I strolled along its banks, I recalled many pleasurable days, with sizable browns brought to net. Unfortunately, I found Mossy to be but a vestige of its former self. The output of its springs is severely reduced, and the resultant water level is very shallow, about a foot below “normal”. Undercuts that used to hide big brown trout don’t exist any more, as the water no longer reaches the banks in many places. I fished for several hours, spooking one big fish, while catching several 10-12 inchers. It was most discouraging though to see what has become of this stream over the past decade of droughts.

The following week I checked out two tailwaters, the Pedlar and Jackson Rivers. The Pedlar reservoir is the water source for Lynchburg, while Lake Moomaw, the reservoir formed by the dam on the Jackson River, was created to provide a steady flow of water for the Westvaco Paper Mill. The water release from the Pedlar is often reduced in droughts in order to preserve Lynchburg’s water supply. But the Jackson River dam release is maintained so that the Westvaco plant can function properly. And that’s exactly what I found; low water in the Pedlar, but good flows in the Jackson, 160 CFS to be precise. The water immediately below the Jackson dam was very turbid, with visibility limited to a few inches. Although a midge hatch was on, the fish were not rising, so I moved downstream to one of the other public accesses, where I found the water to be clear. I caught several nice fish and called it a day.

When faced with severe drought conditions, it takes a bit of research, and a willingness to travel farther than under more normal circumstances. But a knowledgeable, persistent approach will usually allow one to find some good trout water