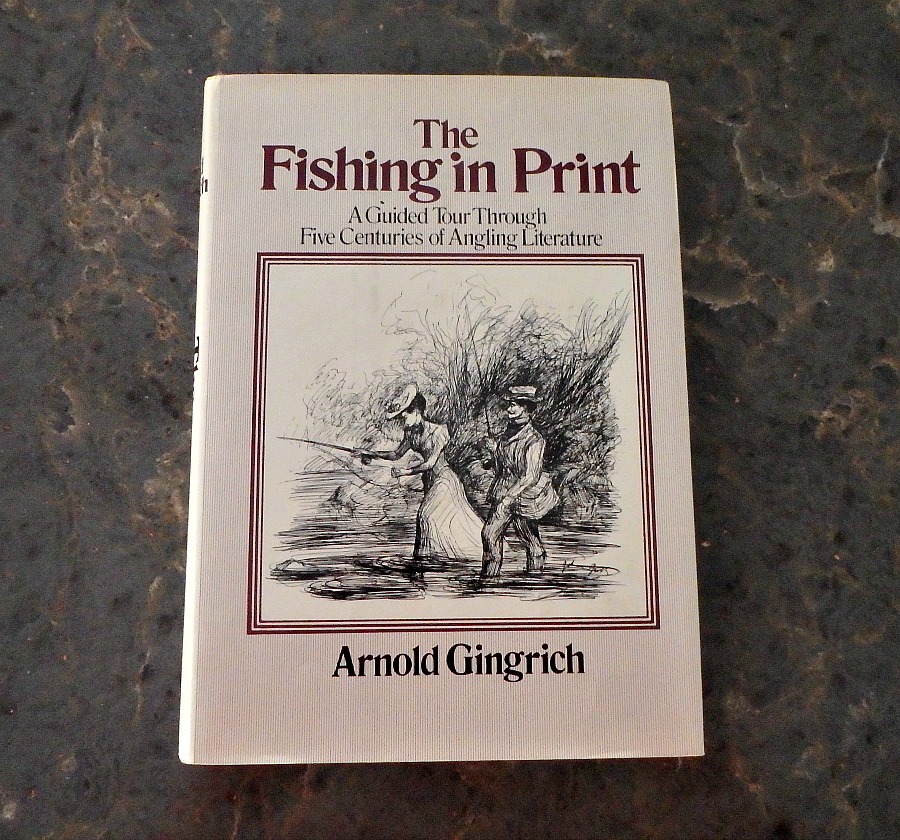 As you may have surmised by now, I really enjoy reading the older fly-fishing literature. If you share this interest, I would suggest that you read Arnold Gingrich’s “The Fishing in Print, A Guided Tour Through Five Centuries of Angling Literature” (1974, http://amzn.to/1R8jNZI.

This work in no way resembles a catalogue; rather it is a very readable “tour” through the history of fly-fishing. Gingrich has divided the five hundred years of fly-fishing literature into sixteen eras. Each era is notable for new techniques or thoughts that came to dominate or change the sport. He provides the historical context, and weaves the authors and their works into his discussion, highlighting their contributions. A few excerpts-

“The amateur angling scholar isn’t going to find anything very rewarding in any of the pre-Walton fishing books. Old Izaak himself is as easy to read as today’s paper, but his predecessors are like the meat in the less accessible parts of the lobster. It’s there if you want to dig for it, but unless you’re practically starved, it’s hardly worth the trouble.”

“The trouble is, nobody reads Venables any more, the way they still read Walton and Cotton. Venables was the first angling author to entertain the idea of casting the fly upstream instead of down. This, which from Stewart’s time on became, for the last half of the nineteenth century, such an absolute fetish, should have earned Venables much greater renown than he has ever enjoyed.”

“There you have pretty much the essence of Stewart. Bearing in mind that Stewart was as radical in his day, with the advocacy of a ten-foot rod, after the prevalence of rods two and three feet longer, as Lee Wulff was a century later in advocating a six-foot rod, virtually everything that Stewart says about tackle and tactics is basically right.”

“Hills, who had a marvelous flair for isolating the significant from a plethora of confusing and sometimes apparently contradictory details, was never better than in defining and delimiting the significance of Halford and his helpers in establishing the dry-fly practice. He thus awards the palm to Pulman for this passage in his 1851 edition:

Let a dry fly be substituted for the wet one, the line switched a few times through the air to throw off its superabundant moisture, a judicious cast made just above the rising fish, and the fly allowed to float towards and over them, and the chances are ten to one that it will be seized as readily as the living insect.”

Based upon my impressions while reading “The Fishing in Print”, I have purchased a number of books to add to my personal library and have yet to be disappointed. So if you are looking for a helpful guide to the fly-fishing literature, I think you’ll find this is a gem.