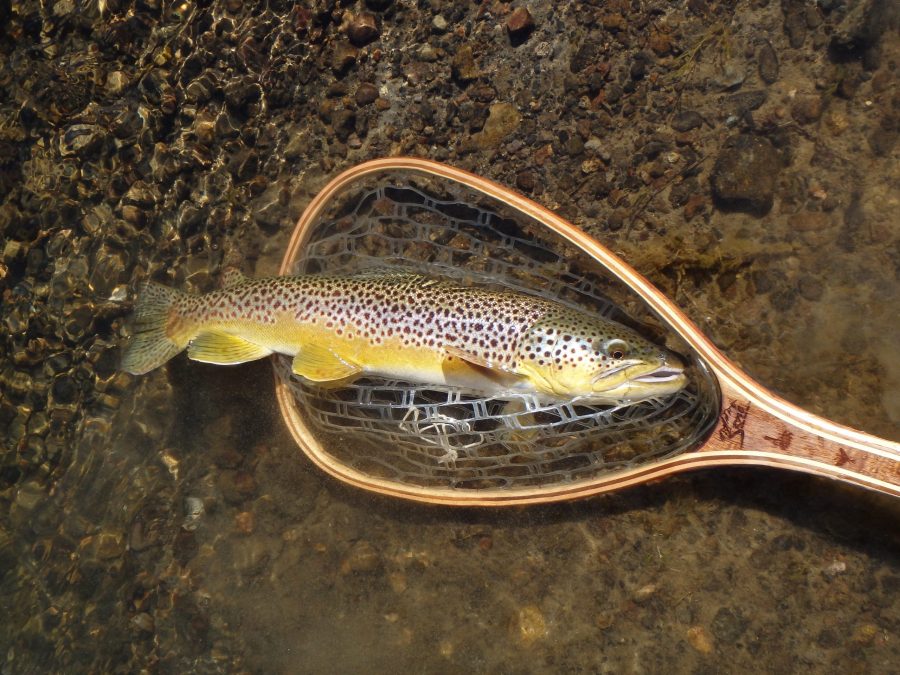 Judged by blogs and books, it seems that most anglers are obsessed with catching a trophy trout. But what exactly is a trophy trout? Although it measured only six inches, the first trout that I caught remains in many ways a “trophy trout” to me. I remember it well, my parachute Adams drifting slowly under the outstretched branches of a streamside sycamore tree, then disappearing from sight. I tightened my line and instantly felt the pulsing resistance of my first trout, a wild brookie. I’m not alone in this feeling of a “first-fish trophy”, as most anglers can recall in vivid detail their first trout.

But for most anglers, a trophy trout means a big trout. So what does it take for a trout to become “big”? I think there are three essential requirements. The first is cover from predators. As fish grow, it is increasingly difficult to hide from predators. One location is deep water. Fish measuring in the upper teens or greater need at least four feet of water to feel comfortable. But that doesn’t mean trout require big streams to grow to such a size. Small streams that have some deep pools often hold big trout. Other sources of cover include logjams and undercut banks. Thus it should be apparent that stream structure rather than simply the size of a stream determines its ability to hold big fish.

The second element is abundant food. Eighty to ninety percent of a trout’s diet consists of aquatic insects. Thus, healthy streams with many species of aquatic insects providing food through all four seasons are a necessity for growth. But as trout become bigger, their diet starts to incorporate larger bites. These include minnows, including their own fry, snails, crayfish, and even mice. Big brown trout are notorious for eschewing daytime feeding of hatches, and only emerging from their holding  lies to feed on these other items at night. Thus a wide variety of abundant foodstuffs is essential for big trout.

The third element is time. In most streams, it takes at least five years for a trout to approach twenty inches, and six to seven years to attain an even greater size. Few trout, only one to two percent, survive long enough to reach twenty plus inches.

So, back to my original question, what is a trophy trout? Two excellent books, Landon Mayer’s “The Hunt for Giant Trout“, and Kelly Galloup’s “Modern Streamers for Trophy Trout: New Techniques, Tactics, and Patterns“, put the bar at thirty inches! Landon goes on to list twenty-five streams and lakes in North America most likely to hold trout of that size. Unfortunately, none of them are within easy striking distance of my home in Virginia. I suspect that this is true for most anglers. Thus, trying to catch such a fish would require a lot of travel and frequent stays away from home. Most of us simply don’t have the time and/or resources for the devoted pursuit of such a fish, and therefore, are unlikely to land a trophy trout thus defined.

Perhaps then it is not unreasonable to consider another definition of “trophy”. I would propose that catching a trout of a size that only one-two percent of the fish in a given stream attain, be considered a trophy trout. In some streams that would be thirty inches, while in others it might be twenty inches, or even twelve inches. The skills needed to find and hook such a fish are the same. Only landing them is a different challenge. What do you think?

2 thoughts on “What is a Trophy Trout ?”