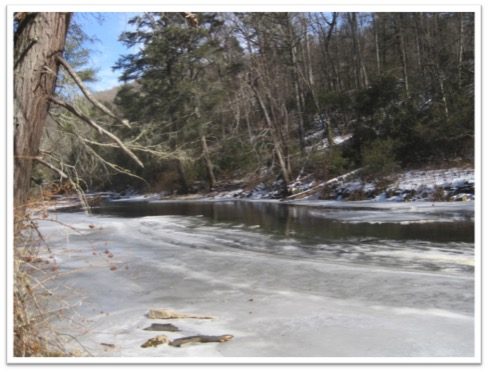 It’s wintertime in the Virginia piedmont, home to hundreds of brook trout streams. Temperatures dip into the low twenties and high teens at night, and rise into the forties during most days. Ice forms along the shady edges of the streams, but most of the water remains open, running freely down the mountain slopes. The trees have dropped their leaves, and the streamside vegetation is mostly dead or dormant. Gone are the caddis and mayfly hatches. Gone too are most of the fishermen, which is just perfect for those of us who long for a bit of solitude while fishing. This is the allure of winter fly fishing for trout.

Most fishermen don’t seem to realize that one can productively wet a line during the cold weather months. But the trout are still there, and they still need nutrition to survive. So as long as the water is open, a stream is fishable. However, due to the effects the colder water temperatures have on the watershed and its inhabitants, it is a different game than fair weather fishing.

Fly fishing is like real estate; it’s all about location. The winter season alters trout behavior. They are cold blooded, and in order to maintain their body temperature, they will seek the warmest water. This is generally located at the bottom of the deepest pools. The water there is least affected by the ambient temperature, and the slower movement of the water requires much less energy to maintain a lie. In addition, the water depth provides good protection from overhead predators.

If springs are present in the stream, the water spewing forth from them will be warmer. This warms the adjacent water, and offers another respite from the cold.

Therefore, wintering trout will tend to congregate either in the deepest pools or about any springs that are present. In contrast to summer conditions, when trout are very territorial, they are less aggressive in the cold winter water, and will gather in much larger pods in these prime locations. As a result, the key to a good day of winter fishing is to explore a stream sufficiently to locate the prime holding lies, and not waste time fishing the other water.

Below is a picture of a section of stream that would be good water to fish in the summer. But its gradient, rapid speed and swirling pocket waters require too much energy for wintering trout.

In contrast, the section seen below offers a long, deep, slow run or pool. While ideal all year around, it is especially attractive to trout in the winter, i.e. it is a prime spot.

Although the robust summer bug hatches have gone, the eggs that were deposited in the streams over the summer have hatched. The resultant larvae and nymphs will be actively feeding on the stream-bottom detritus, as they grow towards maturity. These juvenile bug stages make up almost the entire winter diet of trout living in mountain streams. It follows then, that the most productive fishing technique will be nymphing, especially along the very bottom of the deepest runs.

On very sunny days, the water will warm, and by midafternoon it may have risen ten degrees or more. This will lead to an increase in feeding activity, especially if it has been preceded by several days of cold, cloudy weather. It may also trigger a midge hatch, and if heavy enough, the trout will move into the shallower tails of their runs. There they will feed on the active pupae caught in the film, as well as any adults that have reached the surface. This change in feeding behavior usually starts during the warmest part of the day, between two and three pm, and will continue into evening dusk. But absent a midge hatch, it will be strictly nymphing.

Due to the absence of streamside foliage, it is difficult to approach the water undetected. Stealth is further complicated by the larger cone of vision afforded to deep-lying trout. Therefore, one must use any streamside structures available, usually large rocks or fallen trees, to remain shielded from a trout’s view. In the picture below, I have placed my rod against the rock that I would crouch behind to fish this attractive winter run.

I am not especially fond of suspension nymphing, that is, suspending a nymph from either a strike indicator or a big, bushy dry fly. However, it is almost mandatory that runs be approached from downstream in winter, and fished upstream, which is best done with this method.

If using a dry fly, which may draw an occasional strike, I will generally suspend a copper john or bead head pheasant tail nymph two to three feet below the dry fly, depending on the depth of the run. If using a strike indicator, I will drop a midge pupa off the bend of the weighted nymph. The rig is cast upstream, and slowly drifted downstream. If the nymphs are not occasionally catching on bottom structure, they need to be set deeper.

Trout in cold, winter water will not move as quickly nor as far as they will in warmer water to grab a morsel of food. Consequently, I fish a winter run much more thoroughly, with many more drifts, than I would at other times of the year. But with patience, one will be rewarded by our Blue Ridge gems!